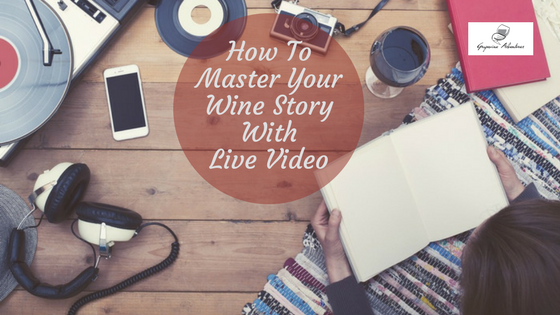 This month I will talk about how to master live video to tell your wine story. The article was supposed to go online Thursday. However, in between preparing for teaching a mini-course on wine in English to tour leaders at We Like Tuscany in the evening and it also being my birthday…it all go a bit hectic. So, I never actually got to push the article online. Anyway, you will be able to enjoy it today instead. Hope that will be all right anyway. 🙂

As mentioned above, I will be focusing on live video! This article will be less in text and more in video. As I will be talking about the use of video in your social media strategy, of course, I thought it would be more fun to make a video. Thus, I hope you do not think I look too silly on video below. LOL

My First Encounter with Live Video

Since 2015, when first Meerkat and then Periscope got started followed by Blab.im in the autumn that same year, things have been happening fast with live streaming. Meerkat is already out of the picture together with Blab. Periscope is still going strong and it is a very cool platform to go live from.

I still remember, when I in early 2015 was following the SXSW (South by South West) conference & festival online via the hashtag #SXSW in Austin, Texas. There, I followed the presentation of the Meerkat app which had been launched a month before. I was so curious, even if I did not know much about live video, yet, that I downloaded the app and started playing around with it. Just a few weeks later, Twitter acquired Periscope and it was this app that in the end took off.

In early 2016, Facebook Live and Youtube Live were launched. Facebook Live is the big player right now because let’s face it, sooo many people are hanging out on Facebook every day. Still, with Facebook you mostly reach people who are already your friends or who are in the groups you already belong to. Regarding Periscope, the cool thing is that you can reach a broader new audience with your live streams.

The latest channel to enter the game was Instagram Live. On Instagram Live you can indeed practice doing live video without being afraid, as when you are done the video disappears. In this way, if you mess up…don’t worry! Nobody will be able to see it afterward.

The Benefits of Using Video for Business

In the 2017 Benchmark Report on Video in Business by Videyard, it is estimated that businesses video libraries will double during the next 16 months. The main sectors where video content is produced for marketing and communications are media and entertainment (average of 791 videos per company), manufacturing, and high tech. The sector with the least produced video content is food & leisure (average of 45 videos per company). So, you see that there is a huge margin for improvement and a niche to conquer.

Now, these numbers are referring to the US mainly, but I am sure that in Europe the statistical numbers would be more or less the same. The most common type of video content is explainer videos, product feature videos, and ‘how to videos’.

When it comes to Live Video, 81% of the audience online viewed more live video content in 2016 than in 2015. Facebook Live Video became one of the strongest players for live streaming at the end of 2016. Facebook live streamed videos are watched three times longer than normal videos, according to an article by Mediakix.

What Are The Key Take Aways?

As we have seen during the last 1-2 years, live video is dominating in digital marketing and communications more and more. It is key to learn how to use video and live streaming especially, in order to get more visibility and better results. To plan your videos better:

To read more about Instagram and live video, see further How To Get Started With Your Instagram Wine Story.

What else…? Don’t forget to sign up for my newsletter to get the latest news about Wine&Social tips and my wine adventures.