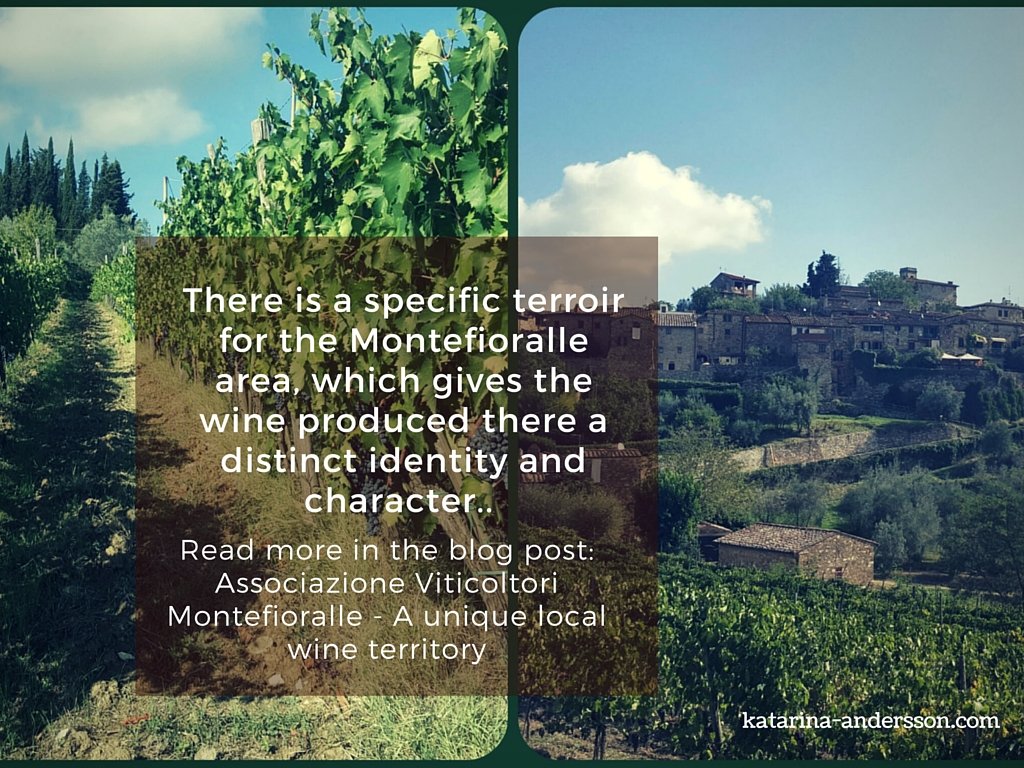 A couple of days ago I was invited to attend the press conference of the Associazione Viticoltori Montefioralle, which is an association of wine producers in the area around the village Montefioralle (a district of Greve in Chianti) in Tuscany, that has recently been founded. All the producers are members of the Consorzio del Chianti Classico, and thus the press conference was organized by the consortium in their enoteca at the Mercato Centrale in Florence. The so to say inauguration in grand style of this association will take place this weekend, on September 26 and 27, with the event Montefioralle Divino 2015.

As mentioned above briefly, Montefioralle is a small hamlet not far from Greve in Chianti, with a history that can be traced back to the Roman era. The original name of the village was Monteficalle. The castle of Montefioralle dates back to 931, and it is mentioned for the first time in documents in 1085. Furthermore, it is considered to have been a stronghold in the wars between the city-states of Florence and Siena in the early Middle Ages. During the years, it has belonged to important families such as Ricasoli, Benci, Buondelmonti and Gherardini. Further on, the castle continuously changed hands between Florence or Siena. Today, the village has about 70 inhabitants and this weekend it will then stand as host for the Montefioralle Divino 2015.

Who are the producers in the Associazione Viticoltori Montefioralle?

This new Associazione Viticoltori Montefioralle consists of 14 wine producers around Montefioralle, namely: Azienda Agricola Altiero, Belvedere Azienda Agricola, Brogioni Maurizio, Castello di Verrazzano, Giannellini Giovanna, Grassi Roberto, Le Palaie, Luciano Meli, Montefioralle, Podere Campriano, Fattoria Viticcio, Azienda Agricola Sagrona, Terre di Baccio, San Cresci, and Villa Calcinaia. These wine producers have gathered together to in a unified way be able to better present the special sub-characteristics of the Chianti Classico. On the website of the association, they clearly speak of the “terroir” that is specific for the Montefioralle area. The “peculiarity of the soil” and the “microclimate” is said to give the Sangiovese grapes that are grown in the area their unique character. Their mission is to produce wines “con carattere“!

The press conference started around noon at the Mercato Centrale in Florence last Wednesday and the different wine producers talked about this association they have founded a month ago. First out to start the press conference and to present everybody was Luigi Cappellini, owner of Castello di Verrazzano. Then Elena Lapini from Podere Campriano and Count Sebastiano Capponi from Villa Calcinaia talked about the wine event Montefioralle Divino 2015, which is taking place now this weekend. It is a kick-off event for this new association as well as the first year for this wine festival, which will continue every year from now on to make Montefioralle wines better known in Italy and abroad.

Then they continued talking about how the local territory today is an essential part in working towards giving your wine a unique character. As a consumer, one should be able to trace a connection between the wine you find on the shelf in the shop and the character of the grapes in the vineyard, i.e. the specifics of the territory and its soil. It is no longer an issue to produce good or bad wine, according to Sebastiano Capponi, because all producers following the stabilized regulations of the consortium would have to work really hard to come up with a bad wine. Therefore, it is important to be able to express your terroir, to give your wine that identity which will make it possible to distinguish among other Chianti Classico wines. The wine producer today need to be able to express the characteristics of his/her vineyard in the final product, i.e. the wine bottle. This exact theory was expressed also by Michela Caberlotto from the Caberlotto winery in Auer in Alto Adige last weekend when we visited her as part of a wine tour with Fisar Firenze. The Caberlotto winery produces Pinot Noir, Lagrein and Schiava wine. Michela emphasized the need for a producer to be in tune with his/her territory, to know your soil and your grapes in order to express its unique traits.

The journalists present at the press conference made their questions and some of the producers were interviewed by the local radio. After the conference, there was a buffet offered in the enoteca of the Consorzio Chianti Classico paired with the wines from the different producers of the Associazione Viticoltori Montefioralle. They furthermore gathered to take a photo together.

More about the typical traits of the Montefioralle wine

Later on, I went for lunch with my friends Lorenzo Sieni and his sister, Alessia Sieni, as well as some of the other producers, at the Divina Enoteca close by. Curious to know more about how they view their own wine and its unique traits, I started delving deeper by asking them to tell me more about it all. They said that the Montefioralle area, from a geological point of view, is different than other areas in Tuscany. Sebastiano Capponi also mentioned how in pre-historical times it is assumed there was a glacier in this area, thus this would be the reason why there is up to 50% of loam in certain places around Montefioralle. Furthermore, they all described the Montefioralle wines to be elegant, with softer tannins than other Chianti Classico wines, having refined and not invasive notes of fruit, as well as being sapid and a bit spicy. The young Montefioralle wines are also considered to be floral and racy.

To know more about the Montefioralle producers and their wines, you should definitely pass by the village today or tomorrow and taste what they have to offer!