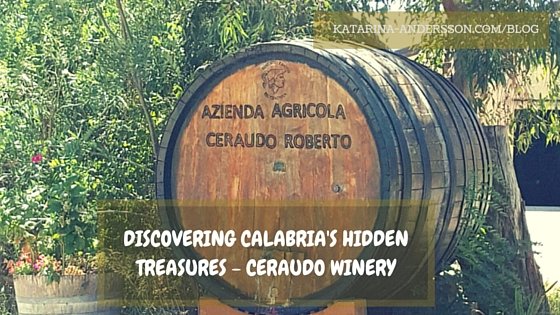 As you might remember from an earlier post, at the end of July I headed down south to Calabria for visiting friends and having a short vacation. I went to Strongoli Marina which is a small place on the Ionian Sea, just half an hour north of Crotone. Other more touristy places close to Strongoli are Torre Melissa, Cariati, Ciró Marina, etc. These places are hidden treasures compared to more well-known places on the Tirrenian coast, such as Tropea, Pizzo and Scilla. However, in this post I will talk about one of the two wineries, Ceraudo, that I visited while being in Calabria.

One already warm morning at the end of July, before heading to the beach, I went to visit the Ceraudo Winery. That day they were very busy having a film crew there shooting some scenes for a new Italian film and a large tourist group from a cruising ship anchored in Crotone. However, thanks to my friend Gianfranco they were very kind and Roberto Ceraudo’s son, Giuseppe, showed us around the winery telling us about their production. Afterwards, we also got to jump in and taste their different wines at the wine tasting they had going on for the visiting tourist group.

The wine estate and its Michelin star rated restaurant, Il Dattilo, is situated in a very beautiful place with nature all around, just 5 minutes outside of Strongoli Marina. As you can read on the Ceraudo website Roberto, the owner, started out on his own and is now managing the wine production and the restaurant together with his children Giuseppe, Susy, and Caterina (she is the renowned chef). They produce both wine and olive oil. Ceraudo was among the first wine producers in Calabria to go over to organic farming, even though it was viewed as a bit of a risk taking by that time.

There are several indigenous grape varieties in Calabria. Here I am only going to talk more in-depth about a couple of them, in relation to the wines produced by Ceraudo.

The Gaglioppo is a grape variety which is considered to have its origin in Ancient Greece. It is grown in the provinces of Crotone, Cosenza and Catanzaro and it is one of the most commonly used grapes in red wines in Calabria. Some say that it genetically is very similar to the Nerello Mascalese and Sangiovese, while others claim that it has similarities to the Frappato. Nerello Mascalese and Frappato are both varieties grown in both Calabria and Sicily, even if when grown in Sicily the morphological traits are slightly different. The Gaglioppo grows well in the quite dry and harsh soil of Calabria, as it is a quite resistant vine variety. In general, it has an intense ruby red colour, a high alcohol volume (often over 14‰), a quite “biting” tannin level and is suitable for ageing.

I tasted the Dattilo Val di Neto IGT Rosso at my visit in July. It has a ruby red hue and aromas of dried flowers, sour cherries, tobacco, oriental spices among others. It has a fruity and fresh taste with quite pungent tannins. Fermentation, refinement and ageing takes place in steel vats, barrique and in bottle. All in all, it is a full-bodied and structured wine, which pairs well with first and second courses such as pasta with different kinds of meat sauces or barbeques and similar.

This grape variety for white wine is also considered to have its origin in Ancient Greece. It has a so to say “sister” variant which is grown mainly in Campania. It is used in the wine denominations Ciró Bianco, Greco di Lamezia, Greco di Bianco, DOC Bivongi, Melissa and Scavigna (DOC = denomination of controlled origin).

The origin of this grape variety is not certain, perhaps also this one dates back to Ancient Greece. It is known in Calabria under the name Mantonico and has been grown there since centuries back, but it is also grown in several regions along the Adriatic coast, for ex. in Abruzzo.

This is a minor indigenous grape variety in Calabria, which sometimes is also called “Pecorino”, and it should not be mixed up with the Pecorino grape grown in the region Le Marche. In the reference literature it says it is mostly grown in the areas of Cosenza and Catanzaro, but obviously it is nowadays also grown around Crotone.

The white wines from Ceraudo that I tasted are Grisara Val di Neto IGT Bianco which is made of 100% Pecorello and Petelia Val di Neto IGT Bianco which is a blend of 40% Greco Bianco, 30% Mantonico and 30% Chardonnay. The Grisara won the award Tre Bicchieri from the wine guide Il Gambero Rosso in 2014, for example. I like both Grisara and Petelia, they are perfect white wines for the warm summer months. They both have more or less a clear straw yellow hue. Grisara has notes of acacia and other similar flowers, herbs, green apple, and citrus fruits. The taste is sapid, fresh and smooth. Petelia also has aromas of herbs and flowers, but of wisteria rather than acacia. The mouthfeel is savoury, fresh and elegant. Both these wines are fermented and aged in steel vats. The interesting thing with the other white wine they produce, Imyr Val di Neto IGT Bianco (100% Chardonnay), is that it is aged for 6 months in barriques of French oak. I have not tasted this wine yet, but I am sure that it will have an interesting oaky and a bit smoky taste.

For those of you who have not yet visited this part of Calabria, I highly recommend taking a trip to the area around Crotone. Have you already been there? Tell us about your impressions and feel free to comment.