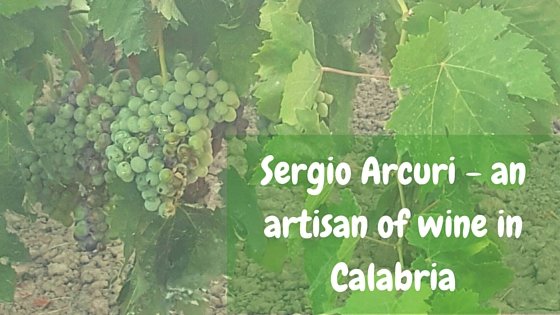 This article is the second one about wineries in Calabria that I visited during my short holiday there in end-July this year. In the first article two weeks ago, I talked about the Ceraudo Winery. In this article, I will present a smaller organic wine producer who can be said to be an artisan of wine, namely Sergio Arcuri in Cirò Marina. Before continuing the article about Sergio, I will give some information about my wine blog. In order to better be able to focus on wine, without being confusing with articles about translation and social media, I will open up a specific wine blog from next week. I apologize for all the changes lately, I will gather all old articles on this new wine blog. Stay tuned!

Some history about the Sergio Arcuri Winery

Wine production runs in the family since many generations in the Arcuri family, all the way back to the end of the 19th century when Sergio’s and Francesco’s great grandfather started out working the land and producing wine. On the website, they also describe how their own father, Peppe, started working with his father in the vineyard already at the age of 9 in the years around World War II, thus learning the ropes and the techniques of a traditional wine grower. Even though Sergio’s and Giuseppe’s grandfather sold all the land he had inherited, their father wanted to continue the work as a winegrower and started buying up smaller plots of land. He bought one vineyard planted in 1948, another one planted in 1980 and the last parcel of 1,75 hectares they added in 2005. Thus, in 1973 their father opened his own small winery where he continued growing grapes and selling the final product as cask wine. It is only since 2009, after a renovation and innovation of the winery, that Sergio and his brother Francesco run the small winery and now bottle the wine instead of selling it only in casks. I believe they still sell cask wine to a smaller circle of clients, at least I saw a guy pass by to buy some wine while we were there. 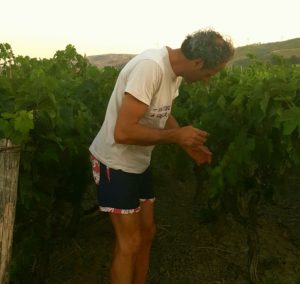 Love and passion for the land…

When you read the story of the winery on their website, you feel that the different generations of Arcuri men seem to have one thing in common, i.e. the love for the land and their vineyards where they grow Gaglioppo. This love and passion for the vineyard and the grapes also shone through when Sergio Arcuri brought us to one of his vineyards, the one dating back to 1948, a bit outside of Cirò Marina. We stepped right in among the vines where he showed us the grapes while he was talking vividly about the story of the land, how they have an organic production, still use hoes to work the soil, pick the grapes by hand, etc. Sometimes he got a bit too much into the Calabrian dialect for me, I thought I might have gotten the sense of what he meant but I still had to ask for a clarification or confirmation from my friend. LOL It was amazing though to stand in his vineyard with the hills in the background and the sea in front of you. Calabria really is a beautiful region (even though of course it has its share of problems) with its mix of wild and more soft landscapes. Sometimes, if the weather is a bit more gloomy, it feels like being in the middle of what a Mediterranean version of a Sturm und Drang picture might have looked like. The picture below of course shows no Sturm und Drang weather, but still you can notice the mix of soft vineyards and a bit more harsh and bare hills above. 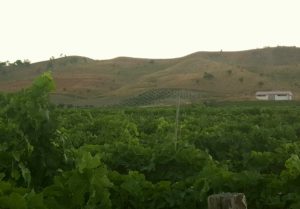 When you enter the winery you really feel like at home and like being in an artisan’s small workshop where the products are crafted with great care. I would say that this could be called the wine workshop of Sergio Arcuri, where the cement and steel vats each have their own place. When Sergio starts talking about the vinification process and the production, the love for his wine and the craftsmanship he really puts into it clearly makes his eyes light up. He produces two wines: the rosé (rosato) wine Il Marinetto and the red wine Ciró Rosso Classico Superiore Aris. 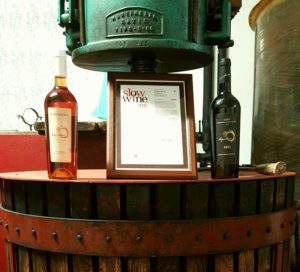 In the article about the Ceraudo winery, I briefly talked about indigenous grape varieties in Calabria, and how the Gaglioppo grape is the most important of these. Sergio Arcuri’s wine production is entirely centered around the Gaglioppo grape, and as mentioned above it really turns into an expression of terroir and tradition. If we link back to the discussion in my last articles, about the fact that it today is fairly difficult to produce bad wine, as Michela Carlotto in Auer in Alto Adige said, and that wine producers need to get in touch with their land to be able to express the typical traits of the territory to be more unique, then Sergio Arcuri is really a fantastic example of this. The love of the land and the ability to express the unique characters of the soil and the grapes really comes through in his wine. It makes his wine authentic and genuine, which are important factors for wine producers to make themselves known today.

When making this rosato wine, the pulp only remains in contact with the grape skins in the open cement vat for a few hours. The skins are not pressed, he says he only extracts the best part of the wine must, which probably make the tannins much softer. I did not taste Il Marinetto while visiting Sergio Arcuri, but I had already tried it several other times while I was in Calabria. It has a weak cherry pink color and is somewhat limpid. It is a very fresh wine, with a taste of cherry as well as a tart taste which evens out the heavy structure of the Gaglioppo grape. Luciano Pignataro states on his blog that he likes Il Marinetto 2012 the best, however, in the competition Rosati d’Italia in 2013 this vintage of the rosato wine won third place. It is a perfect wine for an aperitivo or a dinner during the hot summer months. 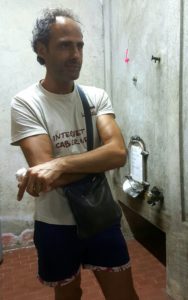 We tasted a Cirò DOC Rosso Classico Superiore Aris 2012 in the bottle when we visited Sergio. He also let us taste the vintages 2013 and 2014 directly from the vats, as well as a bottled blend of 100% gaglioppo 2013.  The color of the Cirò wine often depends on the vintage, if it is very young it probably has a red color which tends more towards purple than ruby red. With aging the ruby red turns more into a garnet red. It generally has aromas of plums, cherries, herbs, violet, spices, tobacco and licorice. It has a warm and fruity taste, which is also fresh, savoury and structured in general. The tannins get softer with the aging of the wine. This wine is entered in the Slow Wine guide for 2013, and I believe also for 2014 and 2015.

According to the regulations, Cirò DOC has to contain at least 80% gaglioppo (until recently it was 100%). The rest can be max 20% of other regional red grapes or a mix of regional red grapes and max 10% of grape varieties such as barbera, cabernet franc, cabernet sauvignon, sangiovese, and merlot. There have been som discussions regarding this change, seeing it as a step towards making the distinct gaglioppo based Cirò wine very similar to so many other wines in order to appeal to a more international taste.

1.) How would you define your wines?

Sergio: My wines are unique and typical for the region, furthermore they are the fruit of a genuine craftsmanship. They are produced with love and passion, and they reflect the gaglioppo grape and the vineyard to 100%.

2.) What food would you pair your wine with?

Sergio: It is a bit difficult for me to name a specific food pairing, as I drink my wine to all sorts of food. Both wines, the rosé as well as the red wine, are very elegant wines. The red wine has very distinct tannins, but they are elegant and do not alter the general finesse of the wine. The right temperature for the red wine varies between 16-20 °C, depending on the season, and they can be paired with many different types of food.

My comment: For example, his wines combines well with pasta with different sauces, red or white meat dishes, cold cuts, and aged cheese.

As always, I advise you to take a trip down to Calabria when you have the possibility to do so, as it is a very interesting region. Then you can also taste these very typical organic wines, and see for yourself how they are an expression of the terroir. Have you already tried Sergio Arcuri’s wines? What did you think in that case? Please leave a comment.

21 thoughts on “Sergio Arcuri – a wine artisan in Calabria”