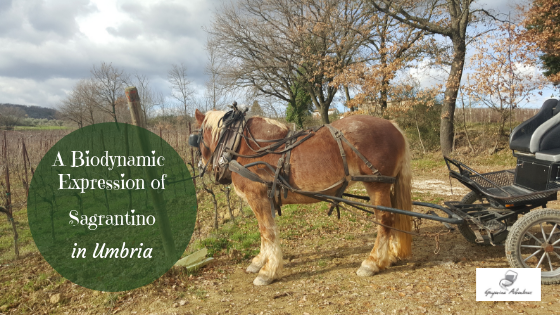 Umbria is a region that is a bit tucked away between Tuscany, Marche, and Lazio and often it has gotten less attention and recognition than it deserves when it comes to wine production. Umbria is not only the land of Sagrantino but also of white grapes such as Grechetto in the form of Grechetto Colli Martani DOC among others.

When the Sagrantino theme came up in the Italian Food, Wine, and Travel (#ItalianFWT) group, it was very easy for me to know who I would write about, namely Roberto Di Filippo of Di Filippo winery.

I met Roberto back in early 2016 when I went to visit his winery together with a group of journalists as part of a two-day tour of Umbria. Di Filippo winery was the first visit of the weekend and I remember that I was hooked immediately thinking, this is the type of stories I want to tell on my blog. I will elaborate on this more below.

La Sapata is where the ethical side becomes very clear because Roberto has made an ethical investment building a winery from scratch in the Romanian countryside employing local people. In that way, he is trying to give back by helping the locals to develop and construct something viable in a very poor environment.

In this article, I will talk more about his wine production below and then, of course, focus on his Sagrantino wines.

The theme this month, February 2019, will be Sagrantino: The Enforcer of Umbria in the Italian Food, Wine, and Travel (#ItalianFWT) group. As I mentioned above, I will be focusing on the Sagrantino wines of Di Filippo winery in Cannara, in Umbria.

On Saturday, February 2nd you can join us on Twitter at 11amEDT / 17.00 CEST to learn more about food, wine, and travel in relation to the Montefalco Sagrantino DOCG wines. Just type in the hashtag #ItalianFWT in the search field and click Enter, thereafter, you click Latest which will show you all the live tweets.

Montefalco, the heart of Sagrantino

Montefalco is a small town in Umbria located on the top of a hill surrounded by the Umbrian Valley and the rivers Topino and Clitunno. From Montefalco, you have an amazing view of the Martani mountains, the Apennines, the towns of Spoleto, Foligno, Trevi, Assisi, among others. It is a town with a long history dating to antiquity. It is rich with art (for ex. the Museum of Saint Francis with fresco paintings by Benozzo Gozzoli), literature, saints, and much more. The Montefalco area is indeed also the center in Umbria for the production of Sagrantino wines.

Sagrantino is a very old grape variety and it is said to have been described already by Pliny the Elder under the name in reference to an area that is very close to today’s Montefalco. However, the origins of the grape variety are not very clear as the earliest documentation that mention the Sagrantino wine dates to 1598. According to Ian D’Agata, a wine that was a blend of Sagrantino and Trebbiano Spoletino was very popular in the 19th century.

There are two different theories though regarding the origin of this grape. On the one hand, the Sagrantino is considered to have been brought back to Umbria from the Middle East by Franciscan monks while it, on the other hand, is said to be of Greek origin and thus imported by Byzantine monks. The name, Sagrantino, is considered to refer to ‘Sacramento’ and had a “sacred” use during religious rites as it was, indeed, cultivated by the monks. Others believe that it derives from the word , i.e. st, referring to the festive celebrations of the monks.

Sagrantino is a grape with a thick skin that is very rich in polyphenols and it gives very tannic wines. Therefore, it is often a very difficult grape to tame into a pleasant wine. It takes time for the tannins to settle down. Roberto Di Filippo says that often the tannins in the Sagrantino is a question of equilibrium. Sagrantino contains a lot of tannins but it also gives a great body to the wine. It is thus a matter of managing to keep these two in equilibrium.

The tannins of the Sagrantino are furthemore to be tended to and matured in the vineyard, says Roberto Di Filippo, with the help of equilibrated organic farming methods. He continues by saying that it is not possible to adjust the tannins in the wine cellar when it comes to Sagrantino.

An Organic and Biodynamic Farmer in Cannara

Why this sub-header referring to as a farmer and not a wine producer you might think, right?

Well, Roberto himself says time and time again that he is first and foremost a farmer. A farmer that is intent on how he uses and farms his land and the environment around him. Here, his ethical mindset and the practicing of organic and biodynamic farming and viticulture fit the overall picture well.

They are not only applying biodynamic methods in the form of substances to treat the vines and cow manure, and similar things. About ten years ago, they reintroduced the use of horses to work the vineyards (they are experimenting this on 5 hectares of vineyard). The horses are not used as a decoration or for visitors to look at, rather they are actually using them for work in the vineyards. They have developed a set of customized and modern tools to use with the horses to as easy as possible be able to rationalize the work.

The concept that I found very interesting is the agroforestry side that is a way to reach a synergy. In the past, it meant that you brought together trees, plants, flowers, crop, legumes, etc. into a whole. Roberto Di Filippo has introduced the breeding of geese at their farm. The geese are let into the vineyard in order to clean and fertilize the soil. This leads to production of meat and grapes. It also results in the saving of energy, up to 40% so far. They believe it looks very promising for the future. (See Exploring the Treasures of Umbria: Grechetto, Sagrantino & Olive Oil.)

Di Filippo winery is working together with the University of Perugia to further research the benefits of organic and biodynamic farming.

Depending on the vintage in question, both of the Sagrantino wines have intense yet smooth tannins and notes of red fruit, spices (such as black pepper), a green undertone that can be more or less balsamic. They are fresh and elegant wines with good aging potential.

For this article, I asked Roberto if he could tell me a bit more about the latest vintages. He says that 2014 was a fresh year with a lot of rain. Even though it was a difficult year in Italy, he says that the Sagrantino 2014 is very elegant.

The Sagrantino 2015 has more complexity and body and the quantity is higher than in 2014. He says that is still to bottle but that it looks very good even though it has less elegance than 2014. Roberto has more doubts about as it looks weaker so far but it is, of course, still too early to determine.

This month, our group of bloggers have been wrestling with Sagrantino, take a look at their posts below. This Saturday Feb. 2, our posts will all be live and we’ll be chatting about our discoveries. Join us on Twitter at 10am CST at #ItalianFWT, we’d love to hear your thoughts and experiences with Sagrantino! Take a look at all the great ideas our group will be posting:

8 thoughts on “A Biodynamic Expression of Sagrantino in Umbria”