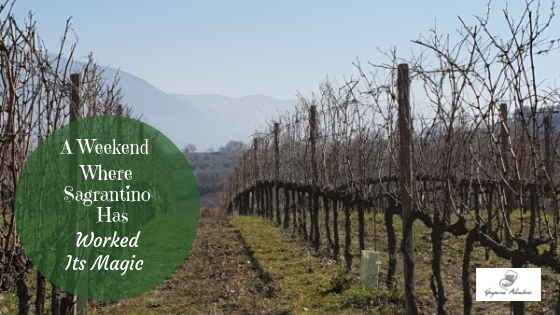 A weekend spent in Montefalco touring wineries and tasting Sagrantino must be almost the best of all worlds, right?

This article has been in writing for a week almost. I have been quite busy with tastings for more than a week with the Anteprime Toscane and not the Anteprima Montefalco. So, every time I wanted to finish the article I had to run to a tasting or winery visit. LOL

Now, I will finally publish it as a first reflection on the days in Montefalco. I will write about the Chianti Classico Collection and the other Tuscan preview tastings I attended further on.

Last night, I got even more inspired to change this article further. We went for dinner to the winery Azienda Agricola Moretti Omero just outside Montefalco. And, it was so much fun!! Omero and his daughters Giusy and Lucia, and their nonna (grandmother) plus all the others in their family are just lovely people.

They cracked just one joke () after another while telling us their family wine story which made it all so wonderful. They really put their personality and passion into each and everything they do. I will tell you much more about the Moretti Omero winery in a future article.

Anyway, of course, it all helped that they opened one bottle of Sagrantino after another…back to a 2008 and a 2002 vintage. Awesome wines and awesome people!

Let me now get back to talk about Saturday, when I arrived at Montefalco for the Anteprima Sagrantino and was brought directly- in medias res – almost, to the Montioni winery in the centre of Montefalco. I and Kelly Mitchell had chosen Montioni winery for our tasting and dinner that night.

Indeed, it was only me and Kelly, so we got VIP treatment and the undivided attention of Paolo Montioni himself. We learned a lot about his winery, its history, and their wines.

Sitting in the hotel room that night trying to finish this article, I realized I wanted to write a short report from our evening with Paolo Montioni in Montefalco. That way, you can feel like you are here with us to kick off the Anteprima Sagrantino. 😊

I come from a week filled with wine tastings in relation to the Anteprime Toscane, and I am still a bit tired. Therefore, it was perfect with a more “private” and calm wine tasting and dinner on the first night together with Kelly and Paolo.

Montioni – A Sagrantino producer in the heart of Montefalco

Walking briskly into the winery tonight, being a bit late because I tried to check into the wrong hotel. The driver brought me to a hotel in the centre of Montefalco according to the information he had, but it turned out my name was not among the bookings. I looked around the reception, saw the hotel name on a sign and realized I was in the wrong place.

Luckily, my hotel was just 300 m further down the street in central Montefalco. 😉

Anyway, walking into Montioni winery a bit later I saw Kelly and was welcomed by Paolo Montioni. Paolo was in full force talking about his winery to Kelly so I just joined them.

Montioni winery was founded in 1972 and comprises 20 hectares of vineyard, olive groves, and other crops. Paolo told us that his father only produced Montefalco Rosso table wine. Therefore, when it was time for Paolo to take over the reins of the family winery he decided to start producing bottled quality wine.

They have then bought up a couple of other lots through the years, among others Monte Petrella that is the single Sagrantino vineyard from where they source the grapes for their cru Ma.Gia Montefalco Sagrantino DOCG 2015. The vineyard is located about 400 m.a.s.l. on rocky soil and with a lot of wind.

We were lucky as we got to taste this Ma.Gia Montefalco Sagrantino DOCG 2015 from their single vineyard. They will not present it at the general Anteprima Sagrantino tasting on Monday and Tuesday.

Paolo further explained that he and his family at Montioni winery have set up a well-organized wine tour activity that from April to October receives about 15,000 visitors each year. They take the tourists visiting them on a tour through the different vineyards, the olive groves, and then offer them lunch with wine tasting at their core winery building in Montefalco.

Paolo also told us that they in springtime take their visitors to pick white asparagus in the field and then come back to the winery to cook the asparagus and pair it with their Umbria Grecchetto IGT.

Wouldn’t you want to go asparagus hunting in Umbria too…?

Paolo Montioni had organized a light dinner for us, well, perhaps not that light but very yummy. Kelly went for the more vegetarian alternative while I had an antipasto with salumi, crostini, and other local delicacies followed by a fillet steak and spinach.

While eating we started tasting the different wines and together discuss them with Paolo. We tasted 7 wines but below, I will only give some brief impressions and tasting notes about the four Sagrantino DOCG wines.

We started the Sagrantino DOCG line up with a Montefalco Sagrantino DOCG 2011 from Montioni. It is a beautiful Sagrantino wine with smooth and elegant tannins, notes of ripe fruit, sulfur-like gas (as Paolo called it), scrub herbs and a balsamic touch. I really liked this 2011 a lot, for its freshness and elegance and the smooth taste.

The Montefalco Sagrantino DOCG 2013 had a lighter nose with notes of cherry, a sweeter almost a bit chocolate-like touch, more green, and balsamic notes. The taste was smooth also here, the tannins a bit more present though non-intrusive.

When it comes to the Montefalco Sagrantino DOCG 2015, it was just a wonderful wine. 2015 is, of course, known as a very good vintage and you could really feel it in the wine. The fruit is fresh and beautiful, lots of , plum, and black cherry. I was feeling something sweet but could not pinpoint it until Paolo cracked the nut, so to say, by saying the sweetness comes from notes of coconut. The taste is just as lovely, it feels like you are sipping on fresh cherry juice almost.

Last, but not least, we tasted their cru wine Ma Montefalco Sagrantino DOCG 2015, that is a very promising wine. I believe Paolo talked about this as the wine of the future. This wine is unique according to Paolo, as it is named after his two sons Matteo and Giacomo. One was born in February 2015 and the other in August 2016, but they have 2015 as a common denominator. Thereof, Ma, that is ‘magic’.

It is a wine that started out with more floral notes of violet, after a while the more fruity notes came out followed by a toffee or chocolate-like touch, and a balsamic undertone. On the palate you also feel the violet and the red fruit. The tannins are smooth and elegant.

What a start to a Saturday night in Montefalco…

feeling happy after this dinner and amazing Sagrantino tasting, I went to bed to be ready for more winery visits the next day.

Sunday, the day after, was indeed intense with visits to four different wineries around Montefalco to have breakfast, lunch, and afternoon snacks with Sagrantino.

Soon, I will tell you more about the exploration of the different wineries we visited such as Romanelli winery and Cantina Valangius.