After a looong break from getting any article out, I am sorry for that but it has been a very busy month with work, I am finally getting back to writing. I hope you remember me 🙂 and that you will come back and read about my wine – and beer – adventures.

So, I was sitting here thinking…hmmm, where should I start? Now it feels overwhelming almost because there are so many places and events to write about. Then I was thinking, as I am on my way down towards Puglia again (the fourth time this year 😉 soon it feels like I spend more time there…will it become my new home away from home…?), I will start with writing about my visit there in June.

By the way, I will be at the event Aspettando Radici del sud 2019 – 100 bianchi tra terra e mare that will take place in Cisternino on August 8. Will you be there too?

The other day, I also read Susan H. Gordon’s article Radici Del Sud Is South Italy’s Best Wine Party in Forbes about this year’s Radici del sud event where she was one of the invited journalists. Reading her article, it just captured everything about that event, how they really make you feel part of one big family and how it is the very best wine party lasting for a week. I was invited there last year, and this year I decided to go down to Bari for the last tasting day and to be there for the after-party.

Last year, I got to know some cool people at the after-party and we met also this year, how fun is that! Of course, Ole Udsen was a great companion during the event and at the after-party, furthermore, he made me feel assured that we would get back to the hotel somehow. I did not have to sleep outdoors 😉

One more thing that I wanted to mention before I get down to talk more about wine producers I met, the wines I tasted… I had the pleasure of meeting Susan H. Gordon at Radici del sud this year, we ended up having lunch at the same table. I also met so many other wine peeps IRL in June, such as Rebecca Murphy, Charine and Matthew from Exotic Wine Travel, Fabien Lainé, David Ransom, Chiara Giorleo, to just name a few.

I had so much fun last year at Radici del sud but it was also a ‘tough’ week with traveling around northern Puglia and Basilicata tasting wines, doing live videos, posting on social, writing an article mid-event, networking, etc. I think I slept an entire day when I got back home. LOL

This year I decided last minute that it would be fun to go on my own and just have time to enjoy the day when it was open to the public. I just walked around tasting wines randomly and chatting to people I know. They were very kind to let me in with a press pass anyway.

I am not going to go into detail about all the wineries I tasted wines from in this article, I will save some for future articles. So stay tuned for more about Sertura Vini, Fausta Mansio, Camerlengo, La Cantina di Enza, Azienda Agricola Casebianche, etc. Here, I will talk about a couple of wine producers in Puglia only.

The Northern Part of Puglia

Of course, one of my first stops was to say hello to the guys, and girl, at the booth of D’Araprì winery. This year they will be celebrating their 40th anniversary as a winery. 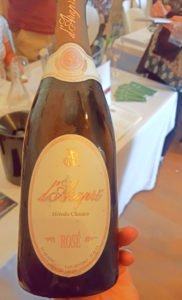 Their ‘booth neighbor’ was Leonardo Pallotta from Cantine Pallotta, who is a small artisanal winemaker from San Severo, just as D’Arapri. He makes wines with Nero di Troia mainly but he also uses Montepulciano and Negro Amaro in various percentages in his I Tre Volti rosé wine and red wine. He then makes a monovarietal Nero di Troia wine called Donna Clelia. Leonardo also makes a white wine with Bombino Bianco, Malvasia di Candia, and Moscato.

I tasted his wines already last year at one of the dinner events in Lucera, however, that evening I was indeed very tired and did not manage to fully appreciate all the wines there. In June this year, I tasted through his wines again and really enjoyed the rosé wine for its freshness yet elegance. Already last year, I wrote about how Uva di Troia gives wines that are fresh, with a balanced acidity, both fruity and floral, spicy, and very elegant. (See Nero di Troia – A Wine Worthy of Greek Gods at #Radicidelsud2017 in Puglia.)

When I tasted Nero di Troia wines again in June, for example from Leonardo Pallotta, I realized why I fell in love with this grape variety last year. 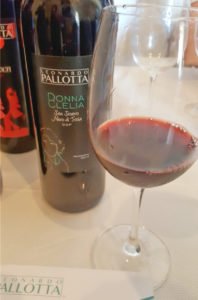 Another person I met last year at Radici del Sud, was the oenologist Giovanni Aiello who was part of the tasting jury together with us. I actually was not really aware of then that he produces wine on his own. This year, I saw he had a booth with his wines and, of course, I stopped by to taste them, I was very curious.

I especially liked his white wine made with a 100% Verdeca grapes, Chakra Verde. Verdeca is a grape variety native to the Valle d’Itria right where the winery of Giovanni is located. Verdeca is believed to have been a grape variety brought by the Greek settlers in ancient times. Some believe it is a grape with a similarity to the Portuguese Alvarinho grape. It is a grape that during recent years has been used more and more to produce monovarietal wines. I am now a fan of this very enjoyable, fresh, mineral, citrusy, fruity wine.

However, how could I not also like Giovanni’s Chakra Blu white wine made with the grapes Verdeca, Maruggio, and Marchione…? Maruggio and Marchione are two other native grapes to the Valle d’Itria area that have almost gone lost. Then, furthermore, his Primitivo wine, Chakra Rosso that is produced within the Gioia del Colle area.

I had Giovanni as a guest at my WinesOfItaly LiveStream in July and there he told us more about his area and its typicity in Puglia. He stressed that he wants to produce a wine where you can recognize the territory in which it is produced while sipping on it. In this case, the Valle d’Itria which is known as the area of the trulli.  This valley is situated about 200 m.a.s.l. and the soil is made up of rocks and stones, that gives a lot of minerality to the wines produced there.

Another interesting thing Giovanni told me, is that he uses the method of whole bunch fermentation for his Primitivo wine. The aim is to arrive at a more complex bouquet for his Primitivo, something that goes beyond the well-known fruity notes.

And did you know that he makes his bottle labels by hand on his own…? This makes his wine bottles into unique products.

To learn more about Giovanni’s winemaking techniques and wines, just continue to listen to the entire live stream below.

#WinesOfItaly #LiveStream is back on July 24th with Giovanni Aiello as a guest.Giovanni is an oenologist with his own winery in Puglia.Join us to learn more about Giovanni and his passion for producing wines that are an expression of the Puglia territory.

Let’s arrive at the after-party

Last year, more people waited around for the after-party ending up in more crazy singing and dancing to folkloristic type music. This year we were a smaller but not any less fun group. Anna was there bringing her cozze pelose (typical local mussels) that were a first for me last year, and this year I was eagerly awaiting to taste them again.

Lello from Irpinia is a bit the after-party organizer trying to get it all going when the Radici del Sud dinner ends. Then the wine peep to know in Calabria, Giovanni Gagliardi, comes with his harmonica and guitar and starts to sing local and folkloristic songs. And like this, it goes on…all night long. Well, I do not really engage in singing and dancing…after all, I am Swedish and a bit reserved ;-)…however, it is always fun to be there.

As I promised Giovanni to not post any of the videos I took during the night…I will not post anything from that evening.

Returning to what I discussed in the beginning, about the concept of family and party feeling with regards to Radici del Sud, there are many people working to make it all work. However, the key person is, of course, Nicola Campanile. Last year, I remembered, being the reserved observer that I am, I was curiously following how it all came together. Already then, just as this year, Nicola always seems like this calm and cool guy, often with a smile on his lips, being ever present. Often I was amazed by this knowing that there surely are chaos and things happening all the time that would give him the right to look stressed.

Anyway, I mentioned this to my friend from Brindisi who lives in Florence, and she claims this is what people in Puglia are good at. Making people feel happy and at home.

Whatever the reason, Radici del Sud is a fab wine event.