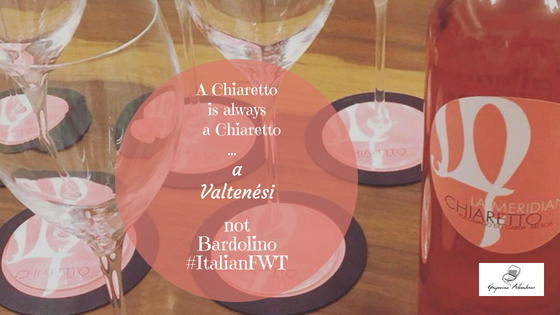 This month in the #ItalianFWT I might be stretching the limits a bit of the chosen Chiaretto theme but still, a Chiaretto is always a Chiaretto, right? Well, of course, there are two different types or rather different DOCs of Chiaretto. Still, I hope I will not be threading upon anyone’s toes…

I knew the theme for July in the #ItalianFWT group would be Chiaretto, however, I had not read clearly that it would only embrace the Bardolino Chiaretto. I was in contact with Roberto Leali from La Meridiana winery in Puegnago del Garda in the province of Brescia. He was talking about his wines and, among other things, about his production of Chiaretto within the Valtènesi area. He sent me a couple of bottles and I told him I would write about it for this month’s #ItalianFWT article.

Then imagine my surprise when I realized that the focus was on the Chiaretto from the Bardolino area!

Then I was thinking, well, it is all about collaboration, right? Rosé wine consortiums and producers are more and more getting into the collaborative spirit and the Consorzio di Tutela del Chiaretto e Bardolino is key in this. Events such as Italia in Rosa that is a yearly event that takes place in Castello di Moniga are embracing rosé producing wineries from all over Italy.

On June 22 this year, five rosé wine producing consortiums went together to jointly organize #oggirosé day all over Italy. An entire day dedicated to rosé wines where you could enjoy various aperitifs, wine tastings, dinners, and other similar events from north to south. Consorzio di Tutela del Chiaretto e Bardolino has been crucial in taking this initiative together with Consorzi del Valtènesi, Vini d’Abruzzo (for Cerasuolo d’Abruzzo), Castel del Monte, and Salice Salentino.

In fact, these five consortiums have recently also signed an agreement to work in favor of valorizing the production of rosé wines with indigenous grape varieties. Five consortiums that can be considered to be at the forefront when it comes to making rosé wines with a close connection to the local territory. #Oggirosé was a way to create awareness of and a focus on quality and territoriality regarding Italian rosé wines.

The theme this month, July 2018, will be Chiaretto rosé wines especially from the Bardolino area in the Italian Food, Wine, and Travel (#ItalianFWT) group. As I mentioned above, I have embraced the collaborative spirit and focus on native grapes thus writing about Garda Classico Chiaretto DOC 2017 from La Meridiana winery.

On Saturday, July 7, you can join us on Twitter at 11amEDT / 17.00 CEST to learn more about food, wine, and travel in relation to the Chiaretto wines. Just type in the hashtag #ItalianFWT in the search field and click Enter, thereafter, you click Latest which will show you all the live tweets.

Valtènesi and Bardolino = Lake Garda as a common denominator

Consorzi del Valtènesi and Consorzio di Tutela del Chiaretto e Bardolino might be different consortiums and the Chiaretto wines might have different denominations but still, they have one common denominator, namely Lake Garda. The particular thing here is that an ice glacier pushed down from the Brenta Dolomites and formed Lake Garda about 1,5 million years ago. The glacier dragged rocks with it from the mountains that contributed to creating the hills surrounding the lake. When the glacier melted it turned into the freshwater lake that exists today.

Read more about this and Consorzio di Tutela del Chiaretto e Bardolino in my article Color Your Spring in a Lovely Chiaretto Pink – Bardolino DOC.

Now, if we go over to talk about the Valtènesi consortium it is the area along the shore of Lake Garda that is located within the province of Brescia. The main denomination in this area is the DOC Riviera del Garda that was established in 1967. However, Riviera del Garda wines had been produced already since the 1930s even though not formally instituted as a denomination.

The grape with a big G in the Valtenési area is Groppello. It is a grape variety native to the Lake Garda area even though it is also grown in other areas in Lombardy, Veneto, and Trentino. It is a grape in the Bresciano area that can be considered a hidden gem as in total there are only about 500 hectares cultivated. The Valtenési Chiaretto wines need to contain a minimum of 50% of Groppello and the other grapes can be, for example, Marzemino, Barbera, and Sangiovese.

To learn more about this Chiaretto wine from La Meridiana, I went ahead and asked a couple of questions to Robert Leali who runs the family winery together with his cousin Fabio. As I have not visited the winery yet to get a more complete picture, I thought it better to do a mini-interview.

Can you tell me a bit about your winery and its history?

The farm has existed for several generations. From my parents to my grandparents and all the way back to my great-grandparents. The winery started to bottle wine back in the 1960s and then our parents continued to step by step invest in quality rather than quantity. At a certain point, they started to sell more bottled rather than bulk wine. In 2015, I and my cousin Fabio took over the running of the winery.

For the moment we are cultivating 11 hectares of vineyard lots that are spread out between the Valtènesi and Lugana areas. Our Valtènesi vineyards are located on the hills about 200 m.a.s.l. with mainly morainic soil. We also have 4 hectares of olive groves from where we produce three different extra virgin olive oils.

Can you tell me your take on the Groppello grape?

Groppello is the grape variety that is typical for this area. It is not cultivated in other places than this part of Italy.

It is a grape that is also used to produce the Chiaretto wine. The Valtènesi Chiaretto consists of 50% Groppello and the other 50% can be a mix of Barbera, Marzemino, and Sangiovese.

Groppello gives wines that are enjoyable, with nice fruity and a bit spicy aromas, and not too high alcohol level. The taste is fruity, salty and not too tannic. We believe that wines made with the Groppello grape should be consumed within a couple of years. 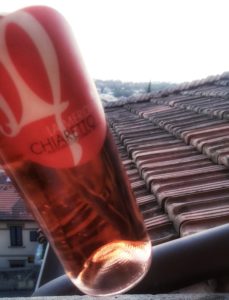 Tell me a bit about your Chiaretto wine?

Our Chiaretto is an expression of the wine in our area. It is fresh, mineral, with lots of aromas, salty…it is a rosé wine to drink during the year of its release on the market. Our Chiaretto pairs well with various kinds of food, especially with fish, first courses, but also with lighter main courses. It has a good acidity that feels refreshing. It is perfect for an aperitif, as it does not have a high alcohol level you never get tired of it.

Garda Classico Chiaretto DOC from La Meridiana is indeed a very enjoyable rosé wine. I really appreciated its freshness and minerality, the slightly salty touch so typical for the wines produced around Lake Garda. The balanced mix between fruit-forward and floral notes makes it into a wine for a summer evening paired with some lighter food. The notes and taste of wild strawberries makes it a delight to sip on.  I tasted it with sushi and it definitely worked well together as it has a slightly spicy undertone.

Join me and my fellow writers in the #ItalianFWT group to discover even more about Chiaretto di Bardolino on Twitter, Saturday July 7 at 11 am/EST.  Here’s what we’ll talk about: