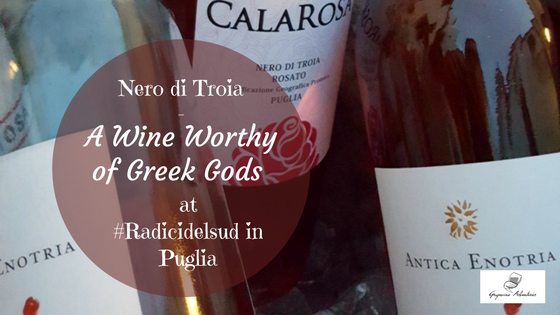 Uva di Troia or Nero di Troia is a wine worthy of Greek gods that I tasted a lot of at #Radicidelsud2017 in Puglia. It is a trendy grape variety and wine nowadays. Or perhaps trendy is not the right word, rather it has reached the level of being one of the more well-known wines produced in Puglia for the moment, next after Primitivo and Negro Amaro.

When thinking of this grape variety that I am fascinated by now after my week in Puglia and at #Radicidelsud2017, I was contemplating my encounters with this wine. I must confess, that even though I like this wine a lot I did not know very much about it before. Just the usual info you read at the sommelier course.

However, thinking about Nero di Troia I felt somewhere in the back of my head that I had already heard about it back in Sweden. Then I thought how odd…in what context? Well, yes… eureka!… I got it!

Bo Hagström a certain TV personality in Sweden, from the same most southern region as me, that is Skåne, is a pioneer in Sweden when it comes to doing TV shows about food and wine. He is especially known for his TV show Solens mat (The Food of the Sun) where he traveled around Italy talking about and showcasing the typical food in different Italian regions.

Bo Hagström was actually nominated honorary Italian consul in Malmö, Sweden in 2009. This was probably due to his love for Italy and its food and wine culture in the TV show Solens mat.

Of course, it does not come as a surprise that one of his favorite Italian regions is… Puglia. Thus, I remembered on the train back from #Radicidelsud2017 that I had heard about Nero di Troia relating to his TV shows back before I was much into wine. My mother used to rave about his TV programs to me over the phone as I was already living in Florence by then.

Also, my pugliesi friends in Florence used to talk about Nero di Troia during the many lunches they organize that start at noon and ends somewhere late in the evening.

My first trip to Puglia was only in 2010. I had been to Sicily and Calabria several times since I moved to Florence around 2000, but I had never arrived in Puglia. This, even though I have several very good friends from Puglia.

Anyway, in 2010, with an ex-boyfriend (from Bologna but with pugliese origin) we decided to go for a holiday in June. He wanted to go to Sweden and celebrate Midsummer and see the midnight sun. But I said who cares about Sweden and getting drunk on cheap vodka under the midnight sun when you can go to Puglia, drink wine, and discover your southern roots. 😉

So, I won and we went to Puglia and Calabria for two weeks discovering different amazing places and sipping on Primitivo and Nero di Troia wines as well as Ciró wines. This was just before I became more into wine.

For those of us who could not wait to get away from the small and a bit closed villages or communities where we were born, regardless whether in Sweden, Italy or any other country, you can imagine that we want to discover something ‘other’ rather than returning to ‘what we know’.

So that relationship crashed and burned! LOL

An interesting memory is that when I saw the sand dunes at Campomarino (at least I think it’s called Campomarino), a beach locality close to Manduria in Puglia, it was a bit odd. Those sand dunes made me think of the sand dunes that we have along the coastline from Ystad towards Sandhammaren in Skåne.

Nero di Troia has a History worthy its name

There are different theories about the origin of the name Uva di Troia. Some say it stems from the town Troia which is situated close to Foggia in Puglia. Others say that it comes from the small town Cruja in Albania. However, if we want to be more romantic and believe in the legend about Diomedes, then Uva di Troia owes its name to him and his grand role in the Trojan War. He is supposed to have brought Uva di Troia vines with him when he migrated to Puglia and Italy after the Trojan War. There are surely many other legends and stories about this grape variety. According to historical sources, it is, for example, supposed to have been a wine liked by Frederick II, the Holy Roman Emperor and consumed at his court.

If we fast forward to the 19th century, that is when Uva di Troia, according to Ian D’Agata in the monography Native Wine Grapes of Italy, started being mentioned more officially in documents about wine production in Puglia. (See pp. 457ff.) Uva di Troia was generally used as a blend in wines such as Rosso Barletta, Rosso Cerignola, and Rosso Canosa to add freshness, elegance, and strength.

During the last 20 years, Nero di Troia has risen to stardom in Puglia becoming so much more than a grape variety to use as a blend in other local red wines. Now, it is more used to make monovarietal wines (in purezza) and for rosé wines. The main production zones of Nero di Troia are the northern parts of Puglia in the province of Foggia and in the Castel del Monte area.

Furthermore, Ian D’Agata says that around 2000 there were very few wine producers who made 100% Nero di Troia wines, while only a couple of years later the number of producers had significantly increased. (See pp. 457ff.)

On the second day of our press tour with #Radicidelsud2017, we arrived in Lucera in the afternoon. Shortly after, we had a meeting for aperitif and dinner with producers of Nero di Troia wines. It was a perfect opportunity to taste and learn more about this grape variety directly from the local wine producers themselves.

Typical characteristics of Nero di Troia wines are the notes of geranium, violet, and clove, as well as red fruit, such as cherries. It is a well-balanced wine with smooth tannins. In a discussion, when we visited D’Alfonso del Sordo winery, it was said that Nero di Troia wines are more similar to the wines of northern Italy due to their balanced acidity and elegant touch. 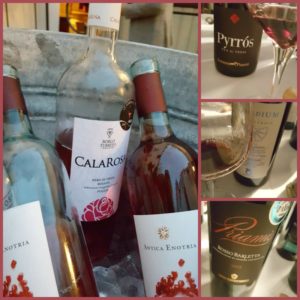 A Lesson in Nero di Troia at #Radicidelsud

Nero di Troia wines are fresh and elegant with both fruity, floral, and spicy notes. It used to play a role as an important blend in other red wines in Puglia to give them strength and make them sophisticated. It is only more recently that it has become a grape variety standing on its own two feet, so to say. Today Nero di Troia wines have become one of the three top wines in Puglia together with Primitivo and Negro Amaro.

So, I feel that I definitely want to taste some more Nero di Troia wines. Don’t you? Why not a fresh and fruity Nero di Troia rosé wine.