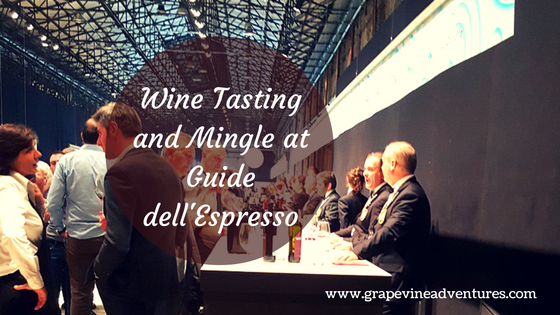 The presentation of the Guide dell’Espresso, i.e. the wine and food guides published by the Italian weekly magazine L’Espresso, took place as usual at Stazione Leopolda in Florence last Thursday. The best restaurants and wines in Italy are awarded and entered into the guide books. The rating system and the look of the guide books have been completely renewed and updated during the last year. For the wines, there are now three different categories: Da bere subito (To drink now), Da comprare (To buy), and Da conservare (To conserve). The rating system in the food guide has also been very much simplified to include five different levels, though the well-known Cappello icon (hat) has been preserved. 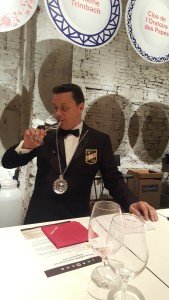 Another side of the yearly Guide dell’Espresso event at the Stazione Leopolda which lies close to my heart is that the wine tasting is managed by sommeliers Fisar from Florence and Tuscany. Thus, it is always fun to go to the event, both to taste some great and interesting wines and to feel at home with your sommelier friends.
Here, I will only comment on a few of the wines we tasted and some wine producers that I met while walking around there between the stands.

As I arrived a bit late to the wine tasting this year due to work, I did not taste very many wines this time. Therefore, I decided to mention only three of them here. There was no pattern in my tasting, rather it was quite random according to where we ended up. I am aware that this is not a very strategic way for a wine writer to go about it all, but sometimes you just get a bit lost in the crowd. 🙂

The Pommery stand is often one of the sponsors at Guide dell’Espresso, and this year I tasted the Grand Cru Royale Millésimé 2006. The grape varieties are Pinot Noir and Chardonnay. It has some notes of flowers, though mainly of exotic fruits and citrus fruits. This Grand Cru Royale is a well-structured Champagne with an elegant and persistent perlage.

This wine is produced by the Ceretto family in Piemonte. They own different estates in different wine areas of Piemonte. In the Barbaresco area, they have the Bricco Asili estate which was the first winery established by Bruno and Marcello Ceretto in 1973.

It is a ruby red wine with notes of cherry, flowers such as roses and violets, and a hint of spices. It is a smooth and well-structured wine with a long finish. 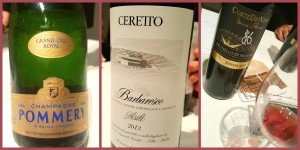 The winery Corte dei Venti in Montalcino is owned and managed by Clara Monaci who comes from a family with a long history of winemaking. At Guide dell’Espresso, I tasted this Brunello 2010 which is a smooth wine with elegant tannins and both fruity, slightly floral, and spicy notes. There is also a strong presence of macchia mediterranea.

Mingling with Paolo Calì and other Wine Producers

When you go to the presentation of Guide dell’Espresso you always see wine producers having been awarded for their wines hanging around for the following wine tasting. This year I ran into Roberto Bianchi from Val delle Corti, whom I visited last year with Fisar and also wrote and article about, namely Val delle Corti, A Love at First Sight. He makes a great Chianti Classico wine from the subzone Radda. Another producer I met at Stazione Leopolda and who joined me and Nadia in our wine exploration, was Paolo Cali. He has his wine estate in Vittoria in Sicily where he cultivates mainly Frappato and Nero d’Avola. He told me that one of his main passions, apart from wine, is music and thus he has given names inspired by musical genres to some of his wines, such as Violino, Blues, and Jazz. He also produces the Cerasuolo di Vittoria wine Manene (the 2012 vintage was awarded in this year’s Guide dell’Espresso) and the Cru Forfice Cerasuolo di Vittoria DOCG. He is a very nice guy and my favorite wine producer from Siciliy, so we had a lot of fun tasting wines. Still, I need to taste most of his wines, so I hope to sometime soon manage to take a wine trip to Sicily so I can tell you all about it here. Actually, if you are in Missouri or California you can find his wines, while he in Italy mostly sells them in Sicily. 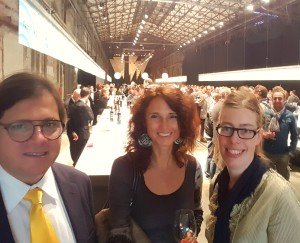 The yearly event of Guide de l’Espresso is always fun and a way to meet people and taste some interesting wines from the producers having been awarded. As always, I was doing the wine tasting tour among the different stands together with Nadia, who is good at sniffing out what to taste and to do a concrete analysis of the wines. As mentioned above, for a while we were also joined by Paolo Calì, thus having a producer pro at hand to give us hints about what to taste.