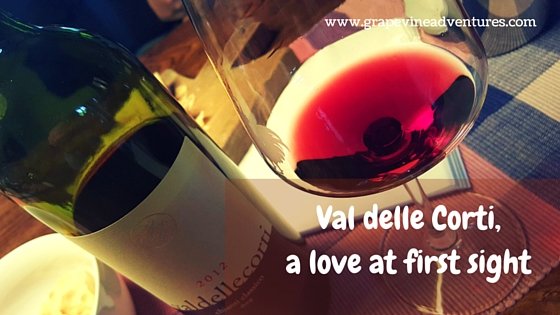 Last week Lorenzo, the president of Fisar Firenze asked me if I wanted to come along with another two fellow sommeliers to visit the winery Val delle Corti in Radda in Chianti. Of course, I said yes, even though I then realized I knew next to nothing about the winery…yet. So I asked Lorenzo, who told me that this wine was a love at first sight for him, as he considers it to be the best Chianti Classico wine from Radda for the moment. This is due to its clean and distinct traits. So, while heading by car towards Radda in Chianti last Tuesday, I was very curious about this winery. 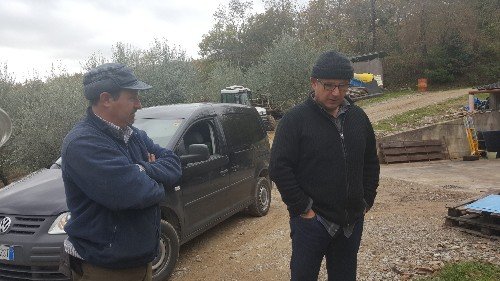 On December 1st, we arrived at Radda in Chianti and Val delle Corti winery around noon, and we were met by the owner himself Roberto Bianchi. He walked up the steps from his house, set in front of the amazing view over the hills of Radda. He cut directly to the chase presenting himself and leading us towards the winery building with four wine glasses in one hand. In front of the main winery building, Roberto started telling us how this is not a fancy “boutique winery” but a real workplace where  “we still make wine with the grapes” (“qui il vino si fa con l’uva”). He told us to be prepared to enter a small wine production area, and indeed, the steel vats, wood barrels, and barriques were almost all piled on top of each other thus utilizing every small square inch of the space. 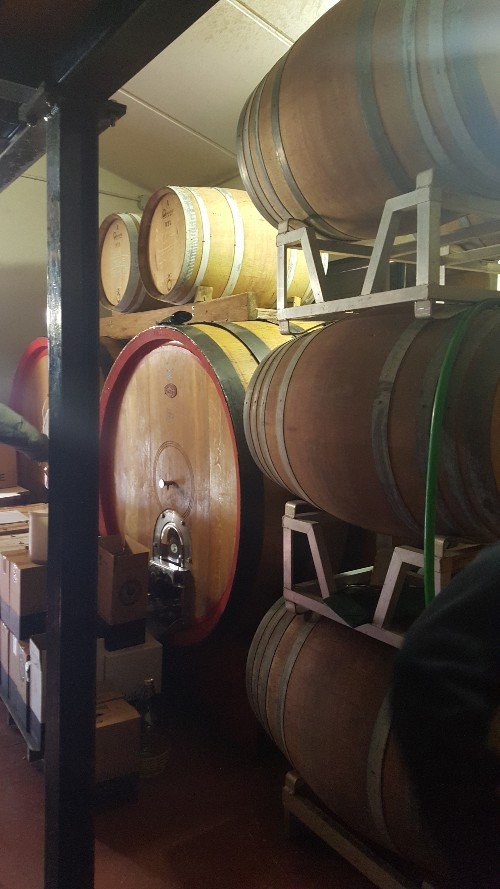 Roberto continued telling us how he believes in a “pragmatic winemaking”, where the temperature control is made by hand and the fermentation periods are long. For example, they also use the method a piemontesina, where the grape skins even after the alcoholic fermentation are kept immersed in contact with the wine for 3-4 months. Lorenzo Sieni explains more about this in his article Le profonde ossessioni di Val delle Corti on the website of Fisar Firenze. 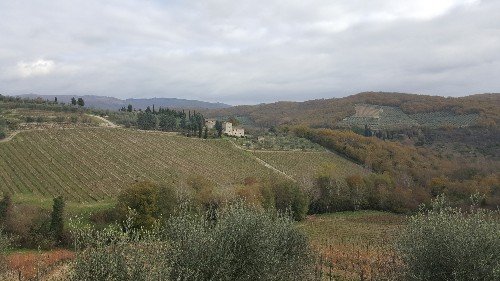 A bit of history

Giorgio Bianchi, the father of Roberto, moved the family from Milan to Radda in Chianti in the mid-1970s, to make his dream about becoming a winemaker come true. They renovated the small estate that they bought and planted new vines. At the age of 15, Robert had headed off to Germany to, as it says in Intravino’s article Val delle Corti, una battaglia vinta tra le colline di Radda in Chianti, study German, doing manual labour, and chasing women. Further on, he went from a day labourer to getting a degree in German literature. In 1999, Robert was back and took over the running of this small winery together with his German wife after the passing away of his father. While showing us around his winery, Roberto furthermore told us that up until the 1980s it was not an easy task to bottle a quality wine in Radda due to the rough and hard soil and long periods of maturation. This was especially true for mostly the northern parts of the vineyards facing east. As a result of the climate change, this eastern exposure has turned out to be a positive factor for wine making during recent years.

After showing us around the winery, Robert invited us into his home to taste his wines in the kitchen. He and his family have a lovely typical Tuscan stone house, and the kitchen is very cosy with small touches of a more Nordic minimalist style too. Below I will talk shortly about the wines we tasted. 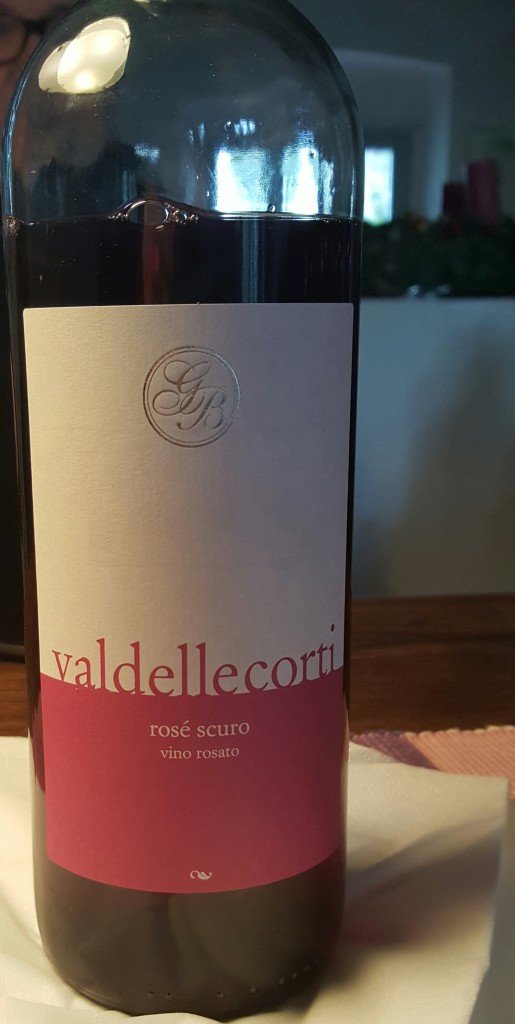 According to Roberto, this is a ‘real’ wine, in its purest sense, with a distinct profile and character. It is 100% Sangiovese with a mix of grapes from different vineyards. It has a good level of acidity, the notes of cherry are prevalent as well as other mixed berries. It is a very interesting rosé with, as mentioned above, a clear and pronounced taste. The suggestions that were put forward regarding possible food pairings were caciucco (a traditional, a bit spicy, fish soup from Livorno) and Indian food with curry. 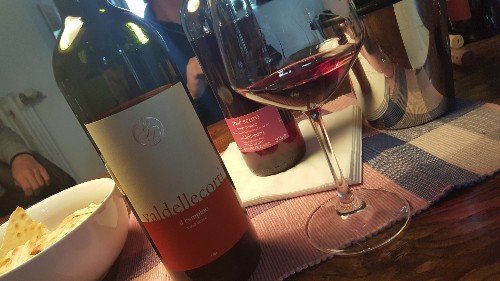 Francesca Cianci in her article in Intravino defines this as a wine to go with the merenda, i.e. lighter snacks such as bread and cold cuts here in Italy. It is 100% Sangiovese which has only matured in steel vats, but, nevertheless, it is a very elegant wine. The most prevalent aroma when first ‘sniffing’ the glass is black pepper, followed by red fruits. The bar was set very high already with the rosé wine, for its clean and distinct aromas and taste. This wine is just as clean and ‘pure’, and even more so… At a certain point, while sipping away here, Roberto asked me why I was so silent and not chipping in with comments about the wines as the others. So I tried to explain that I normally leave that to the others, preferring to listen and observe, even though it might have more to do with being shy at first. 😉 Lorenzo jumped in saying not to worry, that I then often when least expected publish an article about it all. It is always nice to have a group of cool sommelier guys defending your honour. 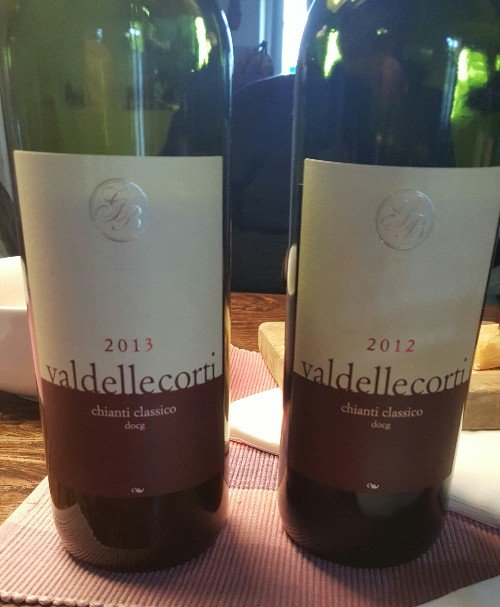 The 2012 needs a bit of time to open up in the glass, but soon you feel the aromas of red fruit and a balsamic taste. It is a clean and refined wine with elegant tannins. Roberto explained that after a baking hot year, you often get a wine with a marmalade-like taste. The use of piemontesina is helpful in vintages like this to even out the acidity, not needing to add any merlot or other international grapes to make the wine smoother. The 2013 is characterized by clear notes of black pepper and flowers, as well as a clear balsamic taste. It is a quite nervous wine, where the acidity leads to impulsive changes in aromas and taste leaving an aftertaste of minerality and saltiness. Roberto says the traits of the wine changes like a flipper in your mouth.

This is the wine our fellow sommelier Lorenzo fell in love with. This is indeed a clean, very full-bodied, elegant and complex wine. The aromas, such as of black pepper and fruits, are in harmony, as is the taste. It is a 100% Sangiovese wine. The greatness of this wine lies also in the fact of having been produced in 2011, the year that has generally been declared as a shitty year (un’annata di merda), especially in Radda in Chianti. After a long period of an African heat wave, the wine producers were more or less doing rain dances out of desperation. With this excellent wine the bar has been raised to its highest… Roberto opened one of his last bottles of this vintage for us to taste. We are of course very grateful to him for this. He only had magnum bottles of this vintage to sell, so we all bought a magnum each of this excellent wine. For those of you who would like to sip on this extraordinary vintage, I guess you need to come to Tuscany to drink it together with us. LOL

Where to find the Val delle Corti wines in the US

The other day I wrote to Roberto to ask him if, and where, my readers in the US can find his wines. The answer is that, yes, he do export to the US via a small importer, namely www.portovinoitaliano.com, and you can find his wines and several different states. He also exports in other countries, and in Europe, it is, of course, easier to also contact Roberto himself to ask for details.

This was indeed a great way to spend a Tuesday afternoon. Only to get out of town to drive through the Chianti landscape, chatting about wine and everything else was very relaxing. Of course, we were all eager to arrive at our destination. Then to be guided through such an interesting wine reality, being only four of us, you really felt like getting a visit with an almost VIP treatment. So I learned a lot and tasted for me new wines, which I agree with Lorenzo, truly are something special. For those of you who pass by Tuscany, I really recommend that you, at least, try his wines, or perhaps even go to Radda to check out that part of the Chianti Classico area.

17 thoughts on “Val delle Corti – A Love at First Sight”