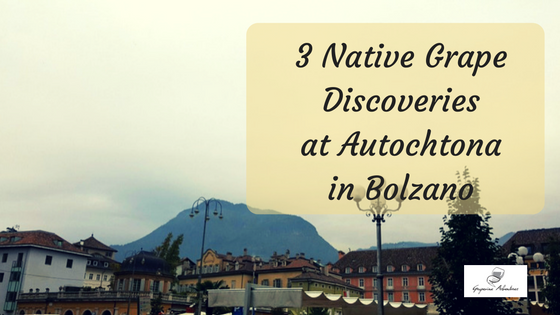 This year I decided to go to the Autochtona wine event in Bolzano for wine producers making wines with native grape varieties. So Sunday a week ago I hopped on the train towards Alto Adige. The Autochtona is a wine event or wine fair where autochtonous wines are put at the forefront. Some of the native grapes are less known than others. As I got a free ticket, I went on my own. However, I was very lucky because Federica and Gianluca Cabrini from Tenuta Belvedere, who had been my guests at #WinesOfItaly #LiveStream a couple of weeks ago, were participating in this two-day wine event. They were very sweet and invited me for dinner in the evenings, and it was nice to have a point of reference at the wine event too. Of course, I that way also got to taste all their wines which I will write about very soon in a coming article.

Tonight I had dinner with Federica & Gianluca from Belvedere Winery @belvederewine. So I had the opportunity to taste three of their wines, namely m’Ami Extra Brut, #Riesling DOC dell’Oltrepo’ Pavese, and Coccìnea #Croatina provincia di Pavia IGT. 🍇 The m’Ami 2015 has an interesting and beautiful color which is a mix between yellowish, white, and salmon-like. It is a fruity and very mineral #sparklingwine with an elegant perlage and persistent taste. … Stay tuned for more about the other wines… And in the photo you also see Kristoffer from the restaurant who was an excellent host at Bad Verdins. #Autochtona2016 … #grapevineadventures

In this article, I will talk mainly about three new discoveries of indigenous grape varieties I did not know much about before. In a second article, I will then mention other highlights during my two days at the Autochtona in Bolzano.

The interesting thing with the Autochtona wine event is that it is fairly small and almost cozy. The event takes places in one part, or angle, of the huge exhibition area at the outskirts of Bolzano. It was very well organized and easy to move around and taste wines from the different producers. It was still good that I decided to stay for two days, in order to be able to taste and talk to the producers in a calm way and without stressing. Below, I will highlight some of my new discoveries then. 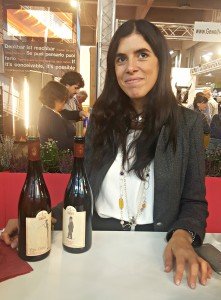 Azienda Nesci is a winery situated in the far south of Calabria, in the province of Reggio Calabria. They are a family winery with a history dating back to the 17th century, and today it is the children of Francesco Saverio Nesci, in particular, Alberta whom I met in Bolzano, who manages the daily work in the winery. They produce wines within the denomination Palizzi IGT, which was established in 1995 and comprises the production of red and rosé wines.
What is particular, at least it was for me, is that they cultivate the Nocera grape. The Nocera variety dates back to the era of the Greek settlement in the southern parts of Italy. It is a grape which is very similar to the different ’Nerello’ grapes and is most commonly cultivated in the area around Messina in Sicily. Indeed, it is one of the grape varieties can be used in the production of Faro Doc wines. During the centuries, the Nocera was exported to Calabria and to France.

This lovely light salmon-like color is the color of the grape variety #Nocera vinified as a white wine. This wine Toto Corde is from @aziendanesci . Nocera is a native grape variety to #Calabria. It has floral notes, and a very strong color in itself, therefore they do not do any maceration on the grape skins at all. Tasted today at #autochtona2016 … #grapevineadventures

At the Autochtona wine event in Bolzano, I had the opportunity to finally taste the wines Toto Corde and Frasané made with this grape by Azienda Nesci. The Toto Corde is a rosé wine with an amber or lightly salmon-like color where the must has not been in contact with the skins during maceration. This as the Nocera grape in itself is very rich in color. It is an aromatic wine with notes of both fruit and flowers. Frasané is a full-bodied and structured 100% Nocera wine with notes of ripe red fruit and a floral touch.

While walking among the stands on the first day of Autochtona trying to figure out what I wanted to taste next, a wine, and especially a grape variety, I had never heard of caught my eye. This was the grape variety Pallagrello Nero and the wine with the same name. Raffaele Tralice from Il Casolare diVino started describing the story behind this wine to me and the fact that he only produces one label, namely this Pallagrello Nero. It is a native grape variety to the area around Caserta in Campania. It is a grape variety also this one with origins back to Ancient Greece. Further on, during the reign of the House of Bourbon – Two Sicilies it was their favorite wine during the 18th and 19th century. With the decline of the Bourbon monarchy in the second part of the 19th century as well as the arrival of the phylloxera, the Pallagrello more or less disappeared or was to a great extent forgotten. It is only in the last 20 years that this grape variety has started to be re-evaluated as something more than to just be used as a blend in other wines. 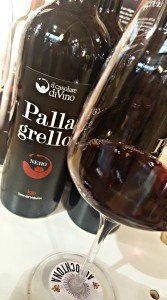 The Pallagrello Nero from Il Casolare diVino is a wine with a very dark red color and notes of red fruit and under vegetation. The tannins are pronounced but not disturbing. It is a bit of a robust and rustic wine, however very interesting and fascinating.

Azienda Agricola Sbarzaglia is located close to Ravenna in Emilia-Romagna which was established back in 1966 by the Sbarzaglia family. They produce different wines such as a Sangiovese Superiore Romagna and still and fizzy Pignoletto wines, however, what is interesting in this context is their research into the grape variety Uva del Tundè. This grape was apparently discovered by a local farmer, Primo Tondini, in the 1930s and the grape has been named after him, as it is called del Tondini or del Tundé. Later on, research was carried out by the University of Bologna to better define this grape variety resulting in it being entered into the National Ampelographic Registry in 2009. In 2010, the Consortium Uva del Tundé was established. According to Ian d’Agata, the parentage of this grape can be traced to the Magliocco Canino in Calabria. 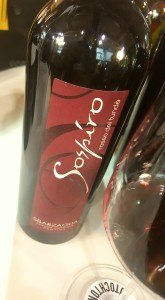 The Sbarzaglia winery produces the wines Sospiro Rosso di Ravenna IGT and Silente Rosso di Ravenna IGT from the Uva del Tundé grape. At Autochtona, I tasted the Sospiro wine which has a purple-red hue and notes of red fruit and under vegetation. Silente is a Riserva and a more full-bodied wine. The tannins are fairly smooth in both wines.

Learning something new is always exciting, and even more so in the context of wine when you get to taste and talk to the producers about their grape varieties and the work they carry out. All three grape varieties are fascinating in their own way. The Nocera and Pallagrello Nero are both more south Italian varieties and they were most probably brought in by the Greek settlers in Magna Grecia from the VII century B.C. onwards. The story behind Uva del Tundè is interesting because it was a local farmer in Romagna who discovered it and continued to cultivate this grape. The common denominator for all three grape varieties, as well as for many others, is that wine producers are re-evaluating them (if they were forgotten as with Pallagrello Nero) and taking care to continue the cultural and historical heritage by producing great wines with them.

4 thoughts on “3 Native Grape Discoveries at Autochtona in Bolzano”