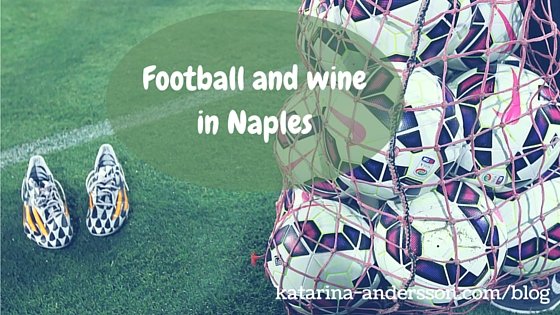 This article will be about football and wine, two of my main passions or interests. Last week I had the opportunity to work as a football interpreter at the Europe League match in the group play between SSC Napoli and FC Midtjylland. When I do these kinds of football interpreting jobs I work via Marco Pupeschi at Clark Football Translations. It was a wonderful experience. As I was in Naples and in the region Campania, I of course also had a glass of Aglianico for dinner with a friend after the football (soccer) match. Therefore, apart from talking about the interpreting job at the match, I thought I would take the opportunity to briefly talk about wine in Campania.

The day before the match

Generally when you work at this kind of international tournaments such as Champions League or Europe League, you start the day before the match by helping out at the two press conferences that are held, one by each team. The hosting team often starts out with holding its press conference in the early afternoon, while the visiting team has its press conference in the early evening. This is a good way to get acquainted with both teams and their staff. This time there were no Danish journalists present at Napoli’s first press conference, so I only got to work in the early evening at the San Paolo stadium with interpreting for the coach Jess Thorup and the former international pro player Jakub Poulsen. They were both extremely nice and kind, so it was a pleasure to work with them.

Already at these first press conferences last Wednesday, I got to know a lot of very nice journalists as usual. Here I am very grateful to Vincenzo and Antonio Petrazzuolo of the online sports magazine, Napoli Magazine, who took a lot of photos and filmed everything (even me;-)) and are so kind to let me use their photos. So most of the photos here will be theirs, as well as the video embedded further on from the press conference. Head over and read the magazine and follow them if you are a football fan and like the team SSC Napoli.

On match day, I was present at the UEFA organizational meeting with both team groups in the morning, but of course, the main focus was on the match that was kicked-off at 19.00 at the San Paolo stadium. I had the opportunity to watch the match directly from the sidelines, which was a fantastic experience and a great way to follow the play. I also had a great time with the Napoli team’s speaker Daniele Bellini, who coached me to read the announcements and results in Danish (with a very Swedish influence)  ;-). Unfortunately, it was not FC Midtjylland’s day and they lost 5-0 against Napoli, but as the Danish coach Jess Thorup said during the press conference after the match – Napoli is one of the 10 best teams in Europe for the moment. So Midtjylland was not able to win as Napoli had stronger players and was better as a team. Anyhow, I wish FC Midtjylland all the best and hope they will win the coming matches in their group play so that they have a chance to get further in the Europe League tournament.

Below you see the video of Napoli Magazine from the two press conferences after the game, and you can find more of their football videos at their youtube page. (And I am translating in the video but only after 15 minutes into the it, before that I am only a silent participant.) 🙂

As I was staying in a hotel and working at the San Paolo stadium last week just in front of the metro station Campi Flegrei in Naples, I thought I would briefly mention this Italian DOC. The Campi Flegrei DOC which geographically is located in the area around Pozzuoli has been a DOC since 1994.

Did you know that the Falanghina of Campi Flegrei is very characteristic because the grapes are grown on volcanic soil? The mild climate and the nearness to the sea lead to a wine that has intense but delicate aromas, a balanced acidity and noteworthy saltiness and minerality. This time in Naples I did not sip at a glass of Falanghina Campi Flegrei DOC, but rather at a glass of Aglianico which I believe was from the Benevento area. Perhaps next time I will try a Falanghina from Campi Flegrei though.

2 thoughts on “Football and Wine in Naples”