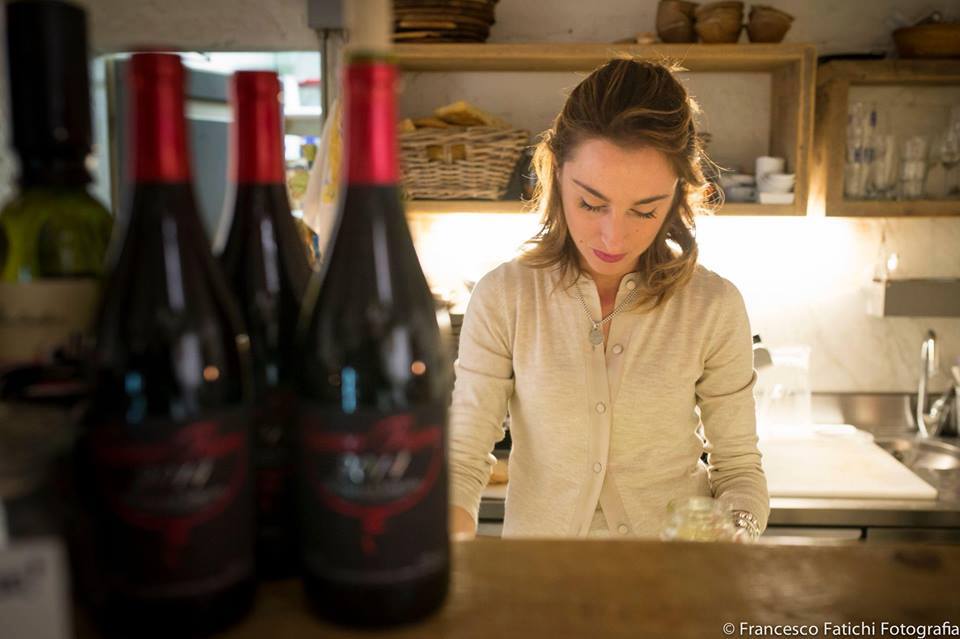 A couple of weeks ago, Vieri, a friend of mine asked me to come along to an informal inauguration of a wine bar of friends of his. Being passionate about wine, as you all probably know by now, I went along, of course, and brought some other friends, too. Uva Nera, the name of the wine bar which is situated in Borgo Ognissanti 25r in Florence just a few steps from the river Arno, is a small gem with a very tasteful and well thought-through décor. You immediately feel like you have stepped into another era about 60 years ago, at the same time as you can taste some very interesting wine and the latest in locally, traditionally produced prosciutto, cheese, etc. If you want to know more about this new, exciting wine bar, and how furniture (for ex. from the 19th century, 1940s,  1950s, and 60s), swing, sewing machines and wine go together; then read on. It will all get more clear, just follow me on this exploration of Uva Nera…

It was a Sunday afternoon, a couple of weeks ago, when we joined Vieri in via Borgo Ognissanti curious about this new wine bar he had been telling us about. Arriving there, it was a lovely surprise to discover this very different concept of a mix between a wine bar and a really cosy place as taken from a British film from the 1940s or 50s. The owner, Costanza Yael Aviv Castelnuovo-Tedesco and her partner soon to be husband, Lorenzo Biagioli, made us feel really at home straight away, asking what bottles they could open for us. Vieri had told her that another friend and I were sommeliers, but not wanting to impose we said it was all right to drink what was already open. However, Costanza made us all happy and opened a La Porta di Vertine Chianti Classico DOCG 2011.

This is a small producer in the hamlet of Vertine in Gaiole in Chianti, who started out their wine producing activity as recently as 2006. The owners Dan and Ellen Lugosch, have developed the concept of ”less is more” with the help of their main oenologist Giacomo Mastretta and the agronomist Ruggero Mazzili. This means that the philosophy of a  great wine is the result of a vineyard where you need to do as little as possible. They see the wine making as a ”minimalist affair”, i.e. that an attentive management of the vine means that there is no need for corrections further on in the vinification process. As I had not tried this particular wine before, it was an evening full of new discoveries in all senses.

A background of Costanza

Over a glass of this interesting Chianti Classico, we then started talking more with Costanza about the story behind her wine bar. She told us that she used to be a designer of cuff links in London, but that she missed the slower pace and more friendly and genuine life back home in Florence, where you enjoy and seize the small beautiful moments every day.  You do not need to take life so seriously every day, but you can try to also enjoy the small things, even while working. Therefore, at a certain point she told us that she decided to return to Florence and do something completely different. She first opened a wine bar close to the Duomo, before Uva Nera. Thus, she is already experienced in the business. The message she wants to convey, as she has told me also more recently when we have met, is that every piece of furniture, every product, be it wine, prosciutto, cheese, marmelades, olives, or other things have been, and are, chosen and hand-picked by her exclusively. And everything with a clear idea in mind, i.e. that she wants the customer to be able to have a genuine and traditional experience when entering Uva Nera.

The evening was a great success. A lot of friends passed by to enjoy the informal inauguration of the wine bar. Since then I have passed by a couple of times to enjoy a glass of wine, also bringing other friends, and to get more of the story behind this place. I had already decided on the evening of the opening that I definitely wanted to write a post about this place.

Entering into a world of Brideshead Rivisited

By quoting the British TV series Brideshead Rivisited, I am not alluding to the war or the religion being its main themes, but rather to the fact that the title of this TV series in Swedish is ”A lost world”.  Entering into Uva Nera, I immediately came to think of this British masterpiece, as it is a bit like entering inside a lost, beautiful world. With the help of the restoring and re-evaluation of furniture, such as an antique sewing machine, a row of chairs from an old cinema from the 1960s, the 19th century vintage sofas and arm chairs in the room downstairs, and other specifically selected items, you really feel immersed in a past era.

One of the other evenings when I passed by for an aperitivo with a couple of friends and sipping on another interesting and well-known wine from Gaiole in Chianti, namely Chianti Classico Castello di Ama DOCG 2011, we were sitting at the table with the antique sewing machine. At a certain point, I noticed that there was a price tag on it. Asking Costanza about it later on, it turns out the furniture is actually for sale. So you can enter this lost world of beauty at Uva Nera and even walk away from there with a piece of antique furniture if you want to. This turns it into a lovely mix of past tradition and history, and an innovative way to consider the concept of a wine bar. Costanza furthermore told me her father had an antique shop, which helps to explain the connecting thought behind Uva Nera.

The music they play in the background seems also to have been chosen to give a certain ambience and take you back to a past post-war era. Lorenzo told me that he is very much into swing music. In fact, as far as I remember, they play a mix of swing, jazz, and blues from mostly the 1940s,  50s, and 60s. So, as you can see, it all adds to setting a certain historical scene for the people who enter to have a glass of wine at Uva Nera.

Are you planning to go to Florence this year? Then you should definitely make a stop at Uva Nera, enjoy a nice glass of wine, while drinking in the lovely historical atmosphere at the same time.

Written by Katarina Andersson and proofread by Susie Holman.

37 thoughts on “Wine, swing, antiques…and all that jazz”