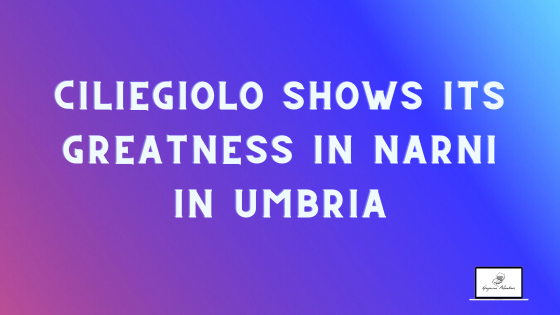 Ciliegiolo is a grape variety with magic greatness native to Maremma in southern Tuscany and central Italy but it is cultivated in several Italian regions. Ian D’Agatha defines it as “…one of the country’s greatest but most underappreciated grape varieties.” This is because it produces vertical wines with “pure aromas and flavors.”

It is indeed a grape with a long history but many of you might not have tasted it yet, or you have tasted it without knowing it. I say this because it has traditionally often been used in blends with Sangiovese to give color, alcohol, and sweetness, and smoothen out the Sangiovese. It is a variety that can be used in many appellations – IGT, DOC, and DOCG – from Emilia-Romagna down to Abruzzo and Campania.

Did you know there is also a wine named Ciliegiolo di Narni located in Umbria?

Well, there is and we will discover more about this further down in the article. But first a bit of history…

A Historical Overview of Ciliegiolo

There have been many interpretations of the origin and the parentage of the Ciliegiolo grape. It was assumed for quite some time that Ciliegiolo was brought to Italy by pilgrims wandering back from Santiago de Compostela, but Ian D’Agatha instead believes that Ciliegiolo first was mentioned in a written document by the Tuscan agronomist Giovan Vettorio Soderini around 1600. Ciliegiolo has often been confused with several different grapes such as Sangiovese, Grenache, and Aleatico.

In 2002, researchers argued it to be identical to Aglianicone that is grown in Campania, but later studies have refuted that idea. In 2007, further research argued that Ciliegiolo together with the Calabrese di Montenuovo (from the Campi Flegrei area) were the parents of Sangiovese. This theory was overruled already the same year after in-depth studies were carried out in France where Sangiovese was identified as the parent of Ciliegolo together with the Muscat rouge de Madère. Ciliegiolo has also been found together with Sangiovese in old vineyards on Etna in a DNA study carried out in 2014. (See Attilio Scienza and Serena Imazio, La Stirpe del Vino, 2018.)

What is Ciliegiolo di Narni?

It is said that Ciliegiolo has been cultivated in the Narni district since the Middle Ages and, therefore, it has found its special habitat there. The Ciliegiolo clone cultivated there is the Ciliegiolo N., number 062.

The Narni Vintners’ Association has put both Narni and Ciliegiolo on the world wine map, or at least on the Italian wine map so far. The association was founded in 2014 to show that the Ciliegiolo grown and produced in the Narni area has a unique identity. One of the main driving forces behind the association is the winemaker Leonardo Bussoletti, who firmly believes in the greatness of the Ciliegiolo cultivated and produced in the Narni area.

The goal of the association is more specifically to support the cultivation of the Ciliegiolo and the development of making monovarietal Ciliegiolo wines in the area. The Ciliegiolo wines are produced under the Narni IGT appellation in Umbria which covers also the province of Terni, including the communes Attigliano, Giove, Penna in Teverina, Alviano, Amelia, Calvi dell Umbria, Guardea, Lugnano in Teverina, Montecastrilli, Narni, Otricoli, Sangemini, Stroncone, and Terni.

Now, you might wonder where Narni is located in Umbria.

Narni is a hillside little town in the southern part of Umbria, not far from Terni to the east and the border to Lazio to the west, that sits at 240 m (787 ft) altitude. Narni was an inhabited area already in the Paleolithic era, but it owes its development and glory to the Medieval period.

Returning to the Ciligieolo di Narni, the Narni Vintners’ Association is made up of the following seven members:

They have together created the event “Ciliegiolo d’Italia” which is the first event, even on an international scale, that is entirely dedicated to the Ciliegiolo grape and the regions where it is produced.

What defines a monovarietal Ciliegiolo wine then?

Ciliegiolo gives vertical, refined, and fruit-forward wines that are light and fragrant. The characteristic notes that can be likened to a “sour red-cherry fruit cocktail with alcohol”, the juiciness of the fruit aromas, the medium body, and general freshness make it into a wonderful red wine.