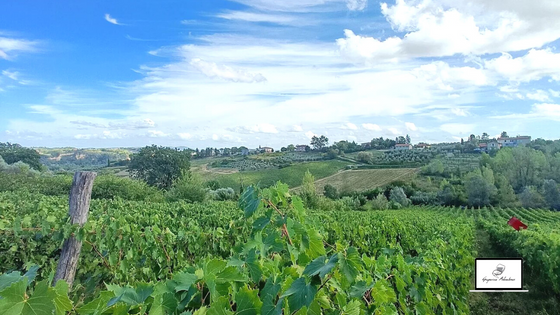 Chianti lies at the heart of the Italian Food, Wine, and Travel group’s theme this month, more precisely it’s a Cavalcade of Chianti wines. Using Chianti as a theme, of course, opens up choosing both Chianti DOCG and Chianti Classico DOCG wines, but at the same time, it also creates a bit of confusion for the layman’s eye. It is true that historically Chianti and Chianti Classico has been endlessly intertwined, however, they are today two very distinct areas and appellations. In fact, Chianti Classico represents the classical area that was outlined in Medieval times while the Chianti district today covers the “outer” area around the classical zone. I have chosen to focus on three Chianti wineries from two different subzones.

On Saturday, 5 November, at 11 am ET / 17.00 CEST the Italian Food, Wine, and Travel group will look further into a Cavalcade of Chianti wines in the #ItalianFWT chat on Twitter.

All those of you who are interested in wine, food, and travel in relation to white wines made with native grapes are very welcome to type in the hashtag #ItalianFWT in the search field on Twitter to see what we discussed during the Twitter chat that day.

The History of Chianti and Chianti Classico in Tuscany

Chianti as a name and area is closely connected to Tuscan history, the first mention of the word Chianti is believed to have been in the 12th century when the hills between Baliaccia e Monte Luco were outlined as Monti del Chianti. In the 14th century, one talked about Chianti for the first time in relation to white wine though, not red! At the end of the 14th century, the founding of Lega Del Chianti resulted in Chianti being added to Castellina, Gaiole, and Radda. In that period, the emblem of the Gallo Nero was also chosen as the ‘brand” of the Lega. This is, in reality, today part of the history of Chianti Classico. In the early 18th century, Chianti would become the first region in the world to legally define the borders of its production area. It was Cosimo III of Medici who by applicable law defined the best production areas for Chianti wine.

The development would then go via the Accademia dei Georgofili in Florence which experimented with different grape varieties, the work of Barone Ricasoli, and his recipe of Chianti in 1870. In 1924, 33 producers gathered in Radda to set up the first Consorzio Vitivinicolo d’Italia to defend the Chianti wine brand. In 1927, another group of producers gathered in Florence to found what we today know as the Consorzio del Vino Chianti, i.e. the Chianti DOCG. Soon after, the Italian government issued a decree in 1932 to make a clear differentiation between Chianti and Chianti Classico. The suffix “Classico” was added to Chianti to clearly determine the “zone of origin”, i.e. the classical production area.

I will talk about wineries from two subzones:

Gimonda winery – A Man, The Terroir, and The Native Grapes

…and, his dog. Because his dog was an important participant during our tasting and a very much steadfast companion of Giuseppe.

On a beautiful summer day, I visited Giuseppe Mongelli at his winery – Gimonda – in Terricciola thanks to David De Ranieri. We had a fun wine tasting with a stunning view of the hills around Terricciola, which is a lovely village located inland just 20 minutes from Pisa. It is part of the Chianti Colline Pisane, also known as Terre di Pisa. Giuseppe worked in another sector and started his winemaking venture only in 2002 when he bought the farm from his neighbor who wanted to retire. Giuseppe is a vigneron in its truest form, having his own winemaking philosophy which is closely connected to the local territory, its traditions, and its soul. He has a focus on native grapes, being organic and as low-intervention as possible in the winery. The wines have a clear identity, they breathe the Terricciola territory, furthermore, they are linear and elegant.

We started by tasting his 100% Sangiovese rosé wine Albarosae which has a freshness and minerality, fruit-forwardness, and yet is a bit richer, “fuller”, and with a more intense or darker hue than Sangiovese rosés generally have. I was sitting thinking “this feels a bit like a rosé from Puglia.” Shortly after he tells me that he learned a lot about winemaking by helping his cousin vigneron in Manduria. It turns out that Giuseppe has pugliese origin and his cousin is Luca Attanasio. The world really is small sometimes.

Giuseppe’s flagship wine is Viceré which is a blend of 90% Sangiovese and 10% Colorino where the grapes come from a 75-year-old vineyard plot. After the fermentation in steel and cement, it matures for one year in barrique and then at least one year in the bottle.

Here, I will talk about his Buscheto Chianti DOCG which is a blend of 85% Sangiovese, 10% Canaiolo, and 5% Colorino. A classical Chianti blend so to say. Fermentation and maturation are carried out in stainless steel and cement vats and then it settles in the bottle for one year. It is a fresh and mineral wine with a distinct sapidity. It has the typical traits of a classical Sangiovese wine with notes of cherry and red fruit, violet, and it also has a touch of the surrounding maquis. The soil in the vineyards is mainly galestro and in certain areas of the plots, it is more calcareous. An interesting thing is that the soil is rich in fossil shells because this part of Tuscany was covered by the sea millions of years ago.

Pietro Beconcini winery is located close to San Miniato in Tuscany which is also a part of the Chianti Colline Pisane, also known as Terre di Pisa. Leonardo Beconcino is the current owner of the winery and it is named after his grandfather Pietro Beconcini who in the 1950s managed to buy the farm where his family long had worked as sharecroppers (mezzadria) under the Marchesi Ridolfi. Leonardo took over the family farm in the early 1990s and since the late 1990s, he works together with his wife Eva Bellagamba who manages the commercial side.

What is typical about Pietro Beconcini winery, is that they are growing Tempranillo and making several wines with that grape. When Leonardo in the 1990s started analyzing his vineyards and, especially, the Sangiovese vines more in detail together with the University of Pisa, they discovered some “strange” ungrafted vines in the old vineyard (la vigna vecchia) that they could not decipher. They started to make micro-vinifications to better understand the findings but could still not define what grape it was. They liked the wine it generated, replanted it, and called it the “X” vines.

In 2004, when they produced the first bottle of Vigna alle Nicchie they learned that it was Tempranillo via a DNA analysis. It is believed that Tempranillo arrived in the San Miniato area thanks to pilgrims who walked the Via Francigena, a pilgrimage road, from Santiago di Compostela to Rome The road runs next to the winery. In 2009, the Tuscan Tempranillo was registered under the denomination IGT Toscana.

Last year, Leonardo and Eva did a rebranding of the labels of the MaurLeo, Reciso, Ixe, and VignaLeNicchie wines. The idea is to better give an expression to the connecting thought behind the wines, i.e. the duality between innovation and tradition that reflect the owners. The emotion and especially passion for the local territory, their history, and the wine. They also wanted to underline the importance of their own personalities that they define as two sides of the same coin; Eva with her more extroverted and expansive side and Leonardo with his more reserved and introverted side.

Here, I am looking closer at their Chianti Riserva DOCG which is a blend of 85% Sangiovese and 15% Canaiolo. Leonardo and Eva are following the tradition and have chosen already years ago to not use any international grapes in their Chianti wines. The fermentation is made with natural yeast and takes place in cement vats followed by 18 months of maturation in large Slavonian oak casks to get smooth and elegant tannins. Thereafter, the wine settles for 8 months in the bottle. It is a lovely fresh and mineral Chianti wine with notes of mature red fruit, violet, a hint of maquis, earthy notes, and leather. It has lots of structure and finesse and it reflects the local territory very well.

Recently, I visited I Veroni winery as part of a press tour. Even if they are so close in Rufina, I had actually never visited them before. I am more well acquainted with other wineries in the Rufina area such as Tenuta Bossi of the Marchesi Gondi family, Castello del Trebbio, Borgo Macereto, and Fattoria Selvapiana. Therefore, it was very interesting to get a closer look at I Veroni winery.

The Veroni farm belongs to the family of Lorenzo Mariani since 1897, but the farmhouse itself dates to the late 16th century. Lorenzo told us that the farm used to be a fixed presence in the area of Pontassieve but then it had a period of decline before Lorenzo decided to take over in the late 1990s and restore it to its past glory. The name “I Veroni” is connected to the period when they dried tobacco in the farm buildings and refers to the “perimeter terraces” on these 17th-century buildings. Historically, the cultivation of tobacco was a flourishing business in Tuscany.

Earlier I mentioned the decree of Cosimo III in 1716 and the outline of the best areas for Chianti production in Tuscany. Rufina was part of these districts as included in the Pomino area. Thus, it is a subzone where Chianti wine historically has been produced for centuries and is known for high quality. Chianti Rufina is a wine that, according to the Terraelectae brand created by the Consortium of Chianti Rufina, expresses the typical traits of the Sangiovese grown in the Rufina area. This means freshness from the higher elevation, elegant floral and fruity notes, especially mature cherry, vibrant acidity, longevity, and proneness for aging.

Here, I have tasted their Quona I Veroni Chianti Rufina Riserva DOCG 2018 which is a 100% Sangiovese wine. I Veroni is organically certified and the estate comprises 70 hectares of which 20 hectares are vineyard plots. The elevation ranges from 100 to 350 meters. The grapes for this specific wine come from the “Quona” Sangiovese vineyard which sits at an altitude of 280 meters. The wine matures for 18 months in French 500-liters oak barrels. Overall, they try to have as low intervention as possible in the winery.

It is a fresh and structured wine, fairly round, with the typical Sangiovese notes of Mammola and cherry, followed by other mature red fruit, spices, tobacco leaves, and a hint of field herbs. The taste is fresh and pleasant with smooth tannins and a promise of longevity.

…with different expressions of the local territory. The idea was to show different faces of the same appellations that are different yet still so very similar.

“Dive into the world of 3D Models”

…and make it possible for your customers to interact with your products on your wine e-commerce.

Digital Twins makes this possible for you. Use my code Kata1 to get a 5% discount.