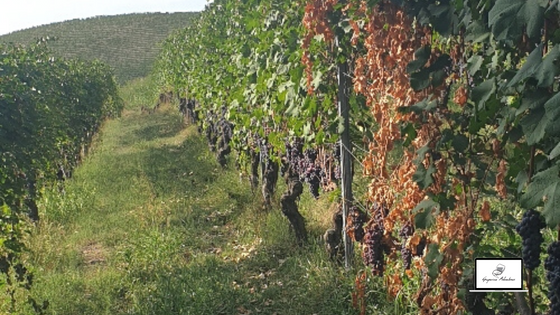 It was in the 1830s in Piedmont that Count Camillo Benso of Cavour, a politician, entrepreneur, and the first prime minister of unified Italy, together with Giulia Colbert Falletti, the last Marquess of Barolo, would play a crucial role in the creation of the Barolo wine. It is assumed that the Nebbiolo grapes generally were used to make sweet wines up until the mid-19th century. Cavour and Giulia Colbert Falletti wanted to change that by starting to make a dry red wine of higher quality to enjoy and sell. Thanks to the intelligence and determination of these two key players, the wine we know as Barolo was born.

The blind tasting had been set up so that we tasted four flights of six wines and in between the flights the floor was open for very brief comments. By limiting the time for comments, the focus was thus on the tasting of the wines and trying to trace common patterns in the Barolo Serralunga d’Alba 2019 wines. The tremendous and quite innovative idea with this blind tasting was that the names of the producers behind the wines were never revealed. With this, the consortium, the producers, and the organizers wanted to show that emphasis should be on the Serralunga d’Alba as a territory, its common traits, and, above all, as a community. Some journalists asked several times to get a list of the wines that had been blind-tasted, but the organizers stood firm in that the names would not be revealed. They stressed again that they wanted everyone to reflect on the blind-tasted wines in terms of community and territory.

I kept thinking, yes, this is the way to go to elevate the level of discourse!

After the tasting, we had a discussion where the general opinion was that the wines were fresh, crisp, herby, elegant and delicate, structured, with polished tannins, and very drinkable and enjoyable. Many underlined the fine aristocratic character of the wines. 2019 was described as a great, “evocative” yet rigorous vintage despite some problems with frost during the spring, giving enjoyable and delicious wines. An American journalist replied to a question regarding how the distinct tannic side of the Serralunga d’Alba Barolos is received in the US and internationally. She said that the tannins often are commented upon but that, in her opinion, the acidity is often more of an issue. The international palate can often think that the wines are sour.

This all then flowed together in the final phase of the Serralunga Day tasting, where the journalists and influencers gathered behind closed doors to draft a manifesto with the title “Barolo Serralunga d’Alba 2019, the grammar of the tannins” (Barolo Serralunga d’Alba 2019, la grammatica del tannino). Each and every one of us got to contribute our opinions and thoughts. My tiny contribution was that even if the trend today has changed towards fresh, fruit-forward, and easily drinkable wines it is important to not end up being trivial. I think that Barolo is a wine where structure and power, elegant power, depth, and longevity are crucial elements. The past tells us that Cavour’s idea in the 19th century was to make a quality red wine with the Nebbiolo grape that was possible to drink and sell. History is indeed circular sometimes.

The Barolo Serralunga d’Alba producers are, in my opinion, on the right track to make wines that are more accessible to a younger audience without forsaking quality, structure, finesse, or aristocratic flair. I am all for the current trend of fresh, clean, linear, and more varietal wines, however, I think it is important to have in mind that wine is not only one thing or the other. There can be, and are, many nuances to a wine.

We are in an era when people seek organic, biodynamic, low-intervention, and overall ‘healthier’ wines (if one can speak of healthy wines). This does not mean that they need to be unimportant, to be drunk young, only in steel, or not able to measure up to iconic wines that often belong more in the past, parkerized era. There is absolutely nothing wrong with that because each period has its trends, and they filled an important function in the period they served but it also does not mean that other wine styles cannot be valued according to connotations in line with another trend era. Now, we are talking about Barolo wines here that already have a “higher love” status in the wine world. Still, it is important to not trivialize them.

Barolo, the Golden Wine of Piemonte

Barolo is one of the noblest wines in Italy, and perhaps the world, that is closely connected to the local territory in Piemonte. Barolo is a village just south of Alba in Piemonte that has given its name to the wine in question. Barolo can be produced in 11 villages or communes in the Langa area, namely Barolo, Serralunga d’Alba, Castiglione Falletto, Novello, and Grinzane Cavour. Then Barolo can be produced in certain parts of the territories of La Morra, Monforte, Verduno, Novello, Diano d’Alba, Cherasco, and Roddi.

Barolo wine is closely connected to the period just before the Unification of Italy, the Risorgimento. The Piedmontese politician Count Camillo Benso of Cavour was not only a key player in Italian unification politics but he was also involved in the agricultural techniques and innovations to improve the local economy. Agrarian reforms were pulled through all over Europe from the late 18th century onward to streamline and make farming practices more efficient. Viticulture and winemaking were one of the areas that particularly interested Cavour and at his Grinzane estate he experimented in the 1830s and 1840s to produce dry red wines of quality with aging potential.

There are two different theories regarding the creation of the Barolo wine. One theory is that Cavour introduced the French oenologist Louis Oudart to Giulia Colbert Falletti, the last Marquess of Barolo, to produce a high-quality red wine with Nebbiolo grapes. Another theory, argued by Kerin O’Keefe, an American wine writer, is that Cavour called upon the oenologist Paolo Francesco Staglieno (a retired general in the army) to improve wine production.

The focus on community and common traits during Serralunga Day is, as mentioned earlier, probably what made the day and tasting so interesting and particular. I have reflected upon this highlighting of community and the desire to appeal to a younger audience after Serralunga Day. The other day, I listened to the latest podcast episode of Mark W. Schaefer (a keynote speaker, educator, business consultant, and author in the field of marketing renowned all over the world. His blog {grow} is one of the top marketing blogs in the world. ) – the Marketing Companion – where his co-host was Sara Wilson and they talk about Gen Z and their concept of community. Sara Wilson has written about young people’s spaces and coined them “digital campfires” in her article The Era of Antisocial Social Media in Harvard Business Review in 2020. I got a bit of an ‘a-ha’ moment like I can use this in my article about Barolo Serralunga d’Alba.

The journalists’ discussion behind closed doors at the Serralunga Day blind tasting was a tentative step to listen to the younger, as well as the ‘older’ or perhaps more experienced generation, of wine writers and raise the discourse a level beyond thinking about tasting notes. If we go one step further, Sara Wilson stresses that Gen Z is anti-social media platforms and more into private spaces, smaller communities where they can hang out with real friends and be themselves. The search for authenticity and to “be real” seems to be key for Gen Z.

Both Wilson and Schaefer argue that the future of marketing – that is already here – will be all about letting young people have their private spaces and at the same time come along with them and have them teach us their point of view and what they need. Listening to and walking along with the younger generations to learn about what they do to have fun, their beliefs, and their needs will, in my opinion, be crucial for wine brands in the future. This does not mean that wine producers have to restyle their wines entirely to younger people’s taste, rather I think it means to walk a middle way where wine brands learn to listen and then in their turn communicate, explain, and teach about their wines in a younger generation’s own language. The discourse needs to change. Today, the wine world is, in my opinion, still using an ‘old school’ discourse to communicate wine to younger generations. Then they are stunned that the younger generations do not buy as much wine as boomers.

In this context, listening to the discussion at the Serralunga Day for drafting the manifesto was exciting and thought-provoking. The ‘young’ generation here was the Millennials present even if they are really starting to get old. They were talking a lot about how they like their wines to be which of course is important but, in the end, it was the combined efforts of depth and nuances added by other wine professionals with more or different experiences that gave added value. In this sense, one could say that it was a small first step for different generations to meet each other on common ground and learn from each other. There will be many more “digital campfires” to approach in the future for wine brands. An additional step would be to raise it to another level and not only focus on the typical traits of wine but put it in a broader context when approaching communities.

…the Barolo producers of Serralunga d’Alba have taken an intriguing initiative when wanting to put their focus on the common traits of their local territory as a whole and to present themselves as a community.

The host, Fontanafredda winery, added a significant historical touch to the event. At the dinner at Garden del Lago, within the Villaggio Narrante at Fontanafredda, we could enjoy delicious creations by the star chef Ugo Alciati from Guidoristorante, and Barolo Serralunga d’Alba 2018 wines from all the 25 producers.

Read more about Piemonte wines in my article Wines Of Roero Mapped Out One Glass At A Time.