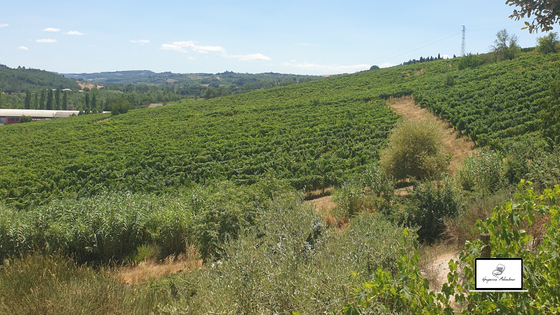 A man and his vineyards; a man and his horse. Well, with Fabrizio Forconi, the owner of Podere dell’Anselmo, it is a bit of both. Podere dell’Anselmo is a small winery, agritourism, and manège located in the Anselmo locality close to Montespertoli in Chianti. This is only about 25 minutes from Florence, in Tuscany. It is perfect if you want to enjoy a horse ride, some food and wine, and a fun time by the pool in Chianti. Sometimes Fabrizio welcomes you like the lord of the manor in riding clothes, sometimes as the vintner, and sometimes as the laid-back guy in shorts in summer style. To name a few styles. He really transmits joy in everything he does, especially when it comes to wine.

Let’s be a bit philosophical here… Wine really is joy, as the Italian wine writer Sandro Sangiorgi has written. It is a joy that extends to so much more than the tasting itself though. I believe it is all about experience, about human connections, about the exchange in every shape and form that enrich our hearts and minds. Wine, in my opinion, can be borderless and inclusive. We, as humans are at the center of the experience of wine. When you find other people who are on your wavelength, the wine experience gets heightened to a superior level…well, provided that you like the wine. This, of course, does not mean I am disregarding the importance of sensory analysis of wine.

Podere dell’Anselmo: a winery in Chianti

Podere dell’Anselmo is not far from Montespertoli which is one of the subzones within the Chianti DOCG appellation that was officially approved as a production area in 1997. The area has about 1600 hectares under vine of which 1400 are for the production of Chianti DOCG wine. Montespertoli is indeed the largest production area for Chianti DOCG wine in the world. It is an area with a long history and tradition of grape growing and winemaking. Sangiovese is the most important grape variety followed by other local varieties such as Canaiolo, Colorino, Malvasia Toscana, and Trebbiano. Also, international grapes are grown in the area.

Now, the production of high volumes, especially in the post-war era, might seem a bit in opposition to the philosophy of artisanal and quality winemaking of today. During the last 20 years, things have started to change, in general, as you might know towards more quality-focused winemaking. Large wineries are no longer only a question of quantity but are indeed important players for sustainability and more. In this article, we will focus on the vintner Fabrizio Forconi and his small Chianti winery where grape growing and winemaking follow the seasons and every vintage is different. Fabrizio says:

“I do not want to express myself, I want to give expression to the grape”

Fabrizio comes from a family in Chianti that goes back in time as farmers and wine growers. His grandfather was still a part of the sharecropping system – mezzadria – in Tuscany. Fabrizio grew up at the end of the period when this farming mentality still existed, even if the system as such had been abolished in 1964. New sharecropping contracts were prohibited from 1974. He says that today’s attention to being organic, biodynamic, and other is nothing new or innovative but rather a reinterpretation of old farming techniques and how to take care of the soil. I have argued this in past articles too.

When Fabrizio started to take over the management of the farm about 30 years ago, it began as a hobby in his spare time. He got going by renting out rooms and making wine on the weekends. In a second phase, he went ahead to breed horses and opened a riding school. He explains that nobody had been doing much for 10-15 years before he decided to take over the running of the estate. He replanted his first vineyard in 1992 and has then renewed and replanted step by step.

When he started out he did not think that the wine they made was good enough. This is not a critique of his grandfather and father but rather that the times and the trends were changing when he took over the estate. His idea was, and is, to respect the soil and the environment, focus on quality, and mainly native varieties. Fabrizio is farming organically since 2008 and certified since 2012. Furthermore, he lets the grass grow in between the vine rows and intervenes as little as possible. In the cellar, they generally use natural yeast, do wild fermentations, and do no filtering.

Fabrizio continues to say that he in the beginning was following what the industry was doing after all, but that he soon started to go his own way. He believed in making 100% Sangiovese wines from an early date and he also believed in planting Colorino when nobody was paying that grape much attention. It was known in the past as a grape blended with Sangiovese to give the wine added color. The color of the Colorino sits in the skins while the pulp is white.

When replanting the vineyards he decided to plant a bit of Colorino in four of his vineyard lots. Colorino is a grape that is sensitive in general but in particular to the sun, according to Fabrizio. Today, he produces a monovarietal Colorino wine, namely Pax.

More about some Wines

The focus at Podere dell’Anselmo is mainly on Sangiovese. Fabrizio produces a Chianti DOCG and a Riserva DOCG and from the same Sangiovese vineyards he makes a cru wine also. The cru – Era Ora – is a selection of the best grapes that have been harvested late to make sure that the grapes are ripe. Era Ora is matured for 18 months in French oak barrels of 10 hectoliters.

Another wine I find interesting is his low-intervention white wine made with Malvasia lunga del Chianti that grows on more than 50-year-old vines. For this wine, they do wild fermentation, maceration on the skins for four months, no added yeast, and no added sulfites. I just tasted it from the steel tank as late as early July, and it was amazing.

When lunch or dinner turns into a wine experience

Often when friends want to go for a wine experience very close to Florence, I recommend them to contact Fabrizio. If you are into horses, like my friend Giovanna, it is a great place especially in the low season to go horse riding. I keep away from the horses (I haven’t gone horse riding since I was very young in Sweden) and stay close to the wine cellar or the pool. LOL

When my friends Letizia, Chiara, and Alberto wanted to explore wine on a Saturday earlier this spring, we went to Podere dell’Anselmo for a winery tour and dinner. Even though it was Saturday, he had organized a dinner for us together with other wine producer friends of his from Veneto. It turned into a fun experience for my friends who felt at home together with Fabrizio who kept opening bottles all evening long. For example, Pax 2015 and 2016 and Magnum Chianti 2014. Even if 2014 was a very difficult year, in this wine it was like the difficulties had aged into positive characters, strength, and elegance.

In July, when my friend Li (#thewininghour) was here we went to Fabrizio together with Nadia, a sommelier friend who lives here in Florence, for the day. He even sent his oenologist Giovanni to pick us up at the closest train station. We had a relaxing day where Giovanni took us on a tour of the winery, we tasted tank samples, and then he explained the different wines to us. Fabrizio showed up later on and opened some more bottles for us to taste.

To summarize, Podere dell’Anselmo is open for

A Winery in Chianti…

namely, Podere dell’Anselmo, where you can enjoy a fun wine experience, and so much more. The owner, Fabrizio Forconi, took over the management of the family winery some years ago and changed the philosophy to a focus on being, organic, sustainable, and making quality wine. A place to visit next time you are traveling to Tuscany.