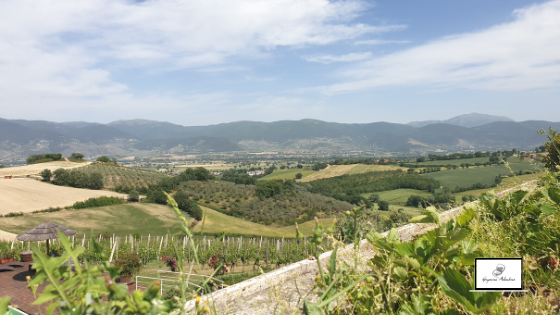 June and summer are here and so also a desire for sipping on white wines such as a Trebbiano Spoletino from Umbria. This month, the wine theme in the Italian Food, Wine, and Travel group is: Exploring Italy’s Native White Grapes. There are many undervalued and hidden treasures in Italy when it comes to indigenous white grapes. While I was attending the Anteprima Sagrantino tasting and press tour, I realized I wanted to write about the Trebbiano Spoletino grape. It is a grape that dates back to ancient times but that only more recently has been re-discovered in Italy, thanks to a general focus on native grapes during the last few decades. Let us find out more about the typical traits of this interesting grape.

On Saturday, 4 June, at 11 am ET / 17.00 CEST the Italian Food, Wine, and Travel group looked further into Exploring Italy’s Native White Grapes in the #ItalianFWT chat on Twitter.

All those of you who are interested in wine, food, and travel in relation to white wines made with native grapes are very welcome to type in the hashtag #ItalianFWT in the search field on Twitter to see what we discussed during the Twitter chat that day.

Trebbiano Spoletino – A Grape with Deep Roots in Umbria

Trebbiano Spoletino is a native grape to Umbria with a long history that dates to ancient times, or at least it is to be assumed that the grape dates to ancient times. A lot of research probably still needs to be carried out. The oldest mentions of Trebbiano Spoletino can be found in the writings of the Roman poet Marco Valerio Marziale and they seem to refer to a wine – Spoletino – rather than to the grape. Further on through the centuries, the literature seems to have continued to underline the territory around Spoleto as important for viticulture and wine production.

In the 19th century, when Spoletino was mentioned as a grape variety it was specified as distinctly different from the Trebbiano grape. In an article in 1879, Francesco de Bosis indeed writes about a Trebbiano di Trevi grape used to make a wonderful Vin Santo Di Trevi. If we fast-forward to the 20th century, the existence of a Trebbiano di Trevi grape cultivated in the Spoleto valley is discussed more often. Trebbiano in this context does not refer to Trebula (farm) as in the other Trebbiano grapes, but to Trevi that in Latin was called Trebiae. Thereof, the name Trebbiano Spoletino.

Still, the Trebbiano Spoletino grape was forgotten and much less cultivated during the second half of the 20th century. Today, there are 48 hectares of Spoleto DOC vineyards cultivated and most of them are in slightly hillside areas where the altitude does not exceed 400 meters.

Trebbiano Spoletino: the Vine That Grows on Trees

Just as the Asprinio di Aversa, also the Trebbiano Spoletino used to be supported by trees in the past, that is in more rural times. The vines were trained on trees, which means they hold on to the tree while they are growing. In Italian, it is called “vite maritata” which means that the vine is joined – “married” – to the tree. It is a cultivation system that was ideated by the Etruscans.

In the Trevi area, this type of training system helped keep the grapes safe from animals, morning mist, and the humidity of the soil. This way of cultivating grapes involved a lot of hard and complicated work during harvest time as the farmers needed to stand on high ladders to pick them. It was a way of growing grapes very much connected to the agricultural economy of the past and it more or less disappeared after World War II.

Trebbiano Spoletino and its Typical Traits

Trebbiano Spoletino is a grape that matures late toward mid-October and it has good acidity that lasts all through maturation together with a low Ph level. It is a versatile grape that can give many different kinds of wine, i.e. many different winemaking styles (white wines matured in steel, oak, amphora, cement, etc.). Not only white still wines but also sparkling wine, passiti, and Vin Santo can be produced with Trebbiano Spoletino grapes.

Some call it a bit of an enigmatic and multifaceted wine that cannot be contained in any standardized classifications. Be that as it may, Trebbiano Spoletino is, in my opinion, a very interesting grape that I am appreciating and understanding better and better every year. As the Trebbiano Spoletino grape was only rediscovered in the early 2000s, there are many expressions and winemaking styles as mentioned above which is what makes it so fascinating.

Some Trebbiano Spoletino wines I have tasted have had a bit of Sauvignonesque character but many white wines sometimes have. Ian D’Agatha does not write much about the Trebbiano Spoletino grape and he does not mention anything about its aging potential. However, that might be understandable as he published his Native Wine Grapes of Italy book in 2014 and since then Trebbiano Spoletino has taken huge steps forward. More wineries are now making monovarietal wines with the grape and also better exploring its aging potential. The Umbrian producers are learning more about how it evolves during aging gaining complexity and structure.

The DOC Spoleto was created in 2011 and then in 2019 it entered to be a part of the Consorzio Tutela Vini Montefalco, i.e. Montefalco Sagrantino DOCG. This has contributed to better discovering more about Trebbiano Spoletino during the Anteprima Sagrantino events in the last couple of years, despite the pandemic, and has started to put these wines on the world map.

During the Anteprima Sagrantino 2022 event that took place recently at the end of May in Montefalco, I had the possibility to taste some younger as well as older vintages of Trebbiano Spoletino.

Gianluca Piernera, the owner of Cantina Ninni, started out making wine for himself and his family before he 2012 produced the first bottles that were released to the market. His passion for wine and winemaking convinced him to start producing low-intervention wine with a focus on Trebbiano Spoletino followed by Malvasia. He also produces red wines with Sangiovese, Merlot, Barbera, Sangiovese, Montepulciano, and Aleatico.

This year, Gianluca had prepared a vertical tasting of Poggio del Vescovo for us, more precisely the vintages 2020, 2019, 2018, 2017, 2016, and 2015. It was very interesting to experience how the Trebbiano Spoletino evolves in the bottle over time. The younger vintages 2020 and 2019 were still fresh and mineral with more fruity and floral notes while, from the 2018 vintage, it was possible to feel how the wine becomes richer and more complex year by year.

It is hard to choose a favorite when all the vintages are so very captivating and intriguing each in their own way. 2017 is fresh and has the typically smoky notes and aromas of white truffle, but then in the glass, the rich and beautiful fruit slowly comes out. It is a more mature fruit, candied fruit, almost a bit caramelized combined with a touch of honey. 2017 was very warm so it is a white wine with body and rich notes of fruit. I liked the 2017 but it was a bit too rich and concentrated for me, you could feel the influences of the very warm year.

I think I liked the 2016 best for its freshness, saltiness, and elegance combined with the smoky notes of flint and white truffle at first, then harts, honey, spices, and then the mature fruit that emerges from underneath. It has a really good grip on the palate and with its acidity, it hints at a good aging potential. Freshness and elegance are the keywords here, also in the aged versions of the Trebbiano Spoletino wines of Cantina Ninni.

Colle Uncinano is a winery that is also located in the Spoleto area and, just like Cantina Ninni, they are focused a great deal on the Trebbiano Spoletino grape. They acquired the land and the estate (including an old mill) in the 1980s and then carried out their first winemaking processes in 2005. They have about 20 hectares of vineyard plots that sit at an altitude of approximately 350 meters. The soil is clay and sand with a mix of gravel.

Colle Uncinano makes Spoleto DOC Trebbiano Spoletino wines and we tasted the three vintages 2021, 2019, and 2015 where it was possible to follow the aging curve of the wine. The white Spoleto DOC wines are very important but Colle Uncinano believes that the Trebbiano Spoletino grape reaches its full potential when made as a sparkling wine with the Champanoise method. We got to taste their Spumante Pas Dosé 2017 which had not been disgorged yet and the Spumante Pas Dosé 2015 which was very interesting.

Returning to their Spoleto DOC Trebbiano Spoletino wines, the 2021 was fresh, fruity, floral (white flowers), herby, and had a mix of green spices and herbs being very noticeable. The fresh and vibrant taste makes it perfect to pair with Umbrian porchetta, they told us, and indeed it was a good pairing. The 2019 was already well into its maturation and aging curve, it had a creamier nose with notes of truffle, harts, honey, lime, pink grapefruit, and a nice herby touch. On the palate, it was fresh and mineral with a good grip and a taste of mature fruit.

I liked the 2015 best among the three because I have realized I really like Trebbiano Spoletino the further it ages. Well, I have only tasted Trebbiano Spoletino wines back until 2015 so I cannot say anything about how it ages beyond that. However, I am very curious to learn more and get to follow the development of the Trebbiano Spoletino wines year by year. In the 2015 vintage, the aromas had deepened and matured even more with opulent notes of mature fruit, flint, white truffle, and a nice herby touch. It is a smooth wine with a nice texture and a smoky side where the bitter aftertaste only adds to its complexity.

See what the others in the ItalianFWT group write: