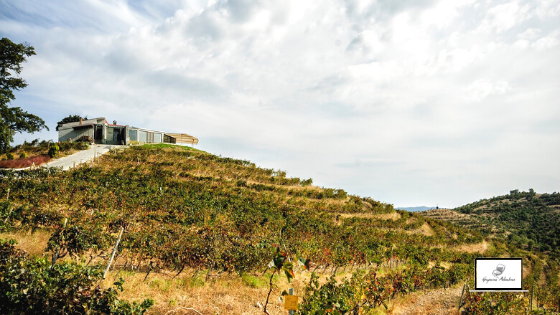 Together with Andrea Lemieux of The Quirky Cork, we will learn more about native grapes and wine production in Turkey. Andrea and I decided to exchange articles on our blogs and first out are Andrea with this overview of Turkish wine. I will soon contribute with an article on her blog. Andrea was a guest at my Digital Vino LiveStream earlier this year to talk about her book about Turkish wine: The Essential Guide To Turkish Wine. This is a recently published book that you can find on Amazon. Enjoy the reading about Turkish wine!

For a country that straddles Europe and Asia and encompasses past cultures such as the Hittites, Hellenistic Greeks, Romans, and Byzantines, it is not surprising that Turkey has a rich culinary culture. Most people have heard of baklava, kebabs, and döner. But part of that culinary richness includes Narince and Kalecik Karası, two of the dominant wine grapes in Turkey. In fact, together with Armenia and Georgia, Turkey is one of the oldest wine-producing countries in the world with a history dating back thousands of years. Despite this grand history, Turkish wine struggles for international recognition.

Turkey’s geographical diversity makes it fertile ground for a huge variety of wines. It is a large country covering some 783,356 square kilometers (302,455 square miles). Its eight wine-growing regions extend to almost every part of the country with only the far east area bordering parts of Iraq and Iran lacking commercial vineyards.
While Turkey borders many countries (including Greece, Bulgaria, Syria, Iraq, Iran, Georgia, and Armenia), water surrounds the majority of its landmass. The country has coastlines along the Black Sea, the Sea of Marmara, The Aegean Sea, and the Mediterranean.

A generally mountainous country, much of the Anatolian (or Asian) side of Turkey consists of a high central plateau of between 700 and 900 meters above sea level with narrow coastal plains, between the Köroğlu and Pontic mountain ranges to the north and the Taurus Mountains to the south. The smaller, European side of the country enjoys some elevation along the Gallipoli Peninsula and in the Strandja Massif in Thrace but tends to be much closer to sea level.

Vineyards are planted at everything from sea level to as high as 1,400 meters making them higher than even Europe’s highest vineyards (Visperterminen, Switzerland 1,150 meters).

Climates run the gamut from Continental to hot and wet Mediterranean and temperate Oceanic to the semi-arid Mediterranean. An array of soil types accompany these climates with growing regions offering everything from decomposed granite, sandy-gravelly loam, clay, volcanic tuff, and terra rossa.

Turkey is home to more than 1,200 native grapes, at least 800 of which have already proven to be unique. Not all are vitis vinfera of course. While it is the 5th largest country for grape production, the majority of that is table grapes eaten fresh or made into molasses and raisins. Fewer than 50 native grapes are cultivated for commercial wine production including:

The country currently has over 180 registered wineries. Winery sizes vary from multi-million bottle operations to boutique wineries making 5,000 or fewer bottles. The majority of wineries are concentrated in the Aegean and Thracian regions but there are a few producers making wine as far east as Turkey’s border with Iraq and Syria.

As anywhere, not all wineries make the same quality of wine. While the quality wine production movement that began in the 1990s has become the norm, a great deal of bulk wine still gets produced. However, wine lovers can find flavors and styles within the realm of quality wine to suit every taste. The bulk of Turkish wine is red but there are still many white wines to be enjoyed. Rosé wine popularity has boomed over the last few years. All levels of sweet wine can be found here from late harvest to fully sweet, botrytized wines as well as fortified wine styles. Skin-contact and amphora-aged wines have also become all the rage over the last few years. Nor can we ignore sparkling wine production here. Traditional method sparkling wines, made with both native and international grapes are the most common but there are a few producers making tank-method wines, cheaper carbonated wines, and as of last year, even pét-nats.

Despite a wine history that spans millennia, the Turkish wine industry faces major challenges. So many of them.

First and foremost, is the lack of government support. More successful winemaking countries might not produce a wine that matches the quality of some produced in Turkey, and yet they are commercially successful due to government backing. Even if the Turkish Government were indifferent to winemaking here, the industry would be in a better place. And yet, its active interference has had a snowball effect that includes also a total ban on advertising alcohol, no oenology schools, and several other impediments to industry growth.

Turkey already has an incredibly low per capita wine consumption rate, hovering just around 1 liter per annum. The ban on advertising makes it very tricky for wineries to grow a local consumer base, let alone an international presence that would increase its extremely limited export figures. It also impedes the development of wine tourism for both domestic and international travelers.

I think one of the biggest obstacles is a lack of an oenology school here. Winemakers are either learning while doing which has mixed success; or they go abroad to learn. For those in the latter category, they certainly come back to Turkey with knowledge and skills…but they’ve learned how to make wine in a European style which has resulted in a sea of imitation Bordeaux in Turkey. It is a great and heart-warming sign that wine enthusiasts are so determined to learn, that they will seek out education anywhere they can, whether it’s a formal education in France, Italy, Spain, the US (and so on..), or even in their grandfather’s garden. That said, Turkish oenologists or wine enthusiasts should have the opportunity to study the subject of indigenous grapes, the history, the production methods, topography, soils, and so on, within an institution where research is conducted on a greater scale.

In addition to these, I believe a lack of any type of appellation system; overuse by wineries and lack of understanding by consumers of wine buzz words such as “boutique” and “natural”; lack of international understanding and interest; and in some instances, the wineries themselves contribute to the stunting of Turkish wine.

Success Factors for Wines of Turkey

Despite these challenges, Turkey is in a position to capitalize on several positive forces that can help propel the industry forward.

Native grapes: As mentioned above, Turkey is home to hundreds of native grapes, many of which are not only suitable for wine production but are unique to the country. As wineries and winemakers learn both to appreciate this varietal richness and learn how to make quality wines with them, the Turkish wine industry will be better placed to differentiate itself as having something truly exceptional to offer.

The Growth of Turkish Gastronomy: Turkey has a culinary history that encompasses not only the lush kitchens of the Ottoman sultans but also the many ethnic influences on the country. Flavors from the Levent, Caucasus, Iran, and Mediterranean hold sway in Turkish cuisine. Talented young chefs are creating innovative menus that blend Turkish foods with wine pairing, an element that has long been missing from consideration in Turkish kitchens. In 2021, one Istanbul-based restaurant made the list of the World’s 100 Best Restaurants according to Restaurant Magazine.

Tourism: Globally, Turkey ranks 15th globally in tourism with an average of 30 million visitors spending almost 30 billion USD annually. Istanbul, the most visited city in the country, is also one of the epicenters of Turkish Gastronomy. Outside of Istanbul, many of the country’s popular attractions including the ruins at Ephesus, Pamukkale, Cappadocia’s fairy chimneys, and even Turkey’s most visited beaches all lie near wineries. While wine tourism is an underdeveloped industry, the combination of tourism attractions, gastronomy, and their proximity to wineries make it an excellent option for travelers.

Taken together, all these factors point to a rosy future for Turkish wine. Though it will likely never reach the wine production levels of its neighboring European countries, it can use its many extraordinary features to position itself as a historic and unique wine country.

Andrea Lemieux is an American wine blogger and writer who lives in Turkey. She writes on her blog The Quirky Cork and, recently, she has also published the book The Essential Guide To Turkish Wine.