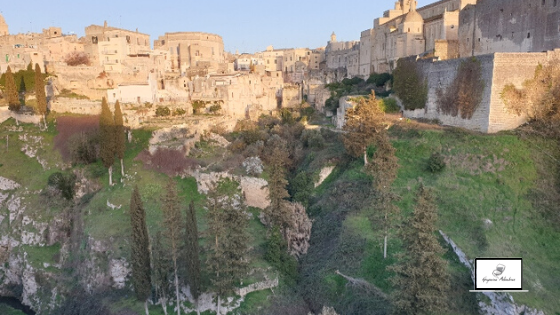 Botromagno winery is situated in Gravina in the Murgie area in Puglia. The Murgie area is actually the only part of Puglia with rolling hills at an altitude of 400 to 600 meters above sea level.

Gravina is a small town with a long history to fall back on. The area around Gravina is considered to have been inhabited since the paleolithic era, and further on in the time it has, for example, been ruled by Romans, Byzantines, Lombards, Muslims, Normans, the Kingdom of Naples, to name a few. Also, viticulture in this area can be traced back to around the 9th century B.C.

The first time I met Beniamino and his brother Alberto D’Agostino was actually right on location in Gravina in Puglia a couple of years ago. In 2017, I was invited to the Radici del Sud event that takes place every summer in Bari (well not this year due to the Coronavirus situation) and as a part of the press tour, we spent 1 day in Gravina.

While we were in Gravina, we visited Botromagno and had dinner at their winery. It was a lovely experience and since then I have always had in the back of my mind that I wanted to have them as guests at my live stream.

Then, in April 2020 after having started up WinesOfItaly LiveStream again, I finally got around to asking Beniamino and I am happy he said yes. It was a great live stream and I learned a lot of new things about Gravina too.

Botromagno winery as it is today was started in 1991 by the D’Agostino family, but before that, it had been a cooperative for many years. Beniamino’s and Alberto’s parents saved the cooperative/winery from bankruptcy and made it into a privately owned winery business.

Since the early 1990s, they have been working continually to improve their vineyards to be able to grow vines based on quality instead of quantity. They have replanted the vineyards in the most suitable places with the best exposition. They have 40 hectares in total that are divided into 10 different vineyard plots.

Beniamino says that when asking the old vine growers in the area for advice they told them that it was necessary to split into many smaller vineyard plots to avoid the problems that the late summer hail storms could cause.

Today, it is Beniamino and his brother Alberto who are running the winery and they are producing wines with a focus on native grapes, mainly Greco, Malvasia, Bianco d’Alessano, Verdeca, Nero di Troia, Primitivo, and Montepulciano. (Montepulciano is rather native to Abruzzo but northern Puglia and Abruzzo are very close.)

A Unique DOC in Gravina

Gravina has its own DOC, namely the Gravina DOC that was instituted in 1983. The Gravina DOC is a white wine that is made with the grapes Greco (min. 50%), Malvasia Bianca, and/or Bianca Lunga (min. 20%), and then it can contain max. 30% of Fiano, Bianco di Alessano, Verdeca, and Chardonnay. It can be produced either as white wine or sparkling wine.

Gravina Doc (DOP) also has a consortium that was instituted in 2000.

But, did you know that Botromagno is the only winery producing this white wine?

Yes, it is indeed true. Beniamino mentioned that there are only 4 wineries in Gravina and that Botromagno actually is the only winery producing the white DOC wine.

This makes them rather unique as a winery.

They have a cru vineyard which is characteristic thanks to its soil of tender tuff. The microclimate in this small area together with the diurnal range results in a very elegant wine with very good acidity and minerality.

Botromagno winery, of course, produce many other wines such as three rosé wines – Elle (previous Silvium), Rosé di Lulú, and Rosé Bollicine -, several red wines as for example their Nero di Troia, Pier delle Vigne, and Dedicato, as well as a passito wine.

Read more about winemaking in Puglia in my article How Remarkable Native Grapes Are Revitalizing Wine in Southern Italy.

A grape that was mainly used as a blend up until 20 years ago, but today it is an up-and-coming grape made as a monovarietal wine.

Beniamino thinks it is a grape that will become the “next big thing from Puglia” if they will manage to promote it in a successful way. Nero di Troia is a very versatile grape that results in very elegant wines. It is a unique grape that is native to the northern part of Puglia.

A question from Cathie Jenks Schafer during the live stream:

She says: I am curious about the passito, is it like a Vin Santo?

Beniamino replied that no, it is more similar to the Malvasia di Lipari type of sweet wine. He continues to explain that they dry the grapes on racks outdoors under the sun for about 30-45 days. During the drying period, the grapes lose about 80%, and after the pressing there only remain about 15 liters out of 100 kg of juice. Amazing, right?

The juice is fermented in new French oak barrels and is then matured for one year in steel tanks before being bottled.

Here in this episode, we talk about:

• The location of Gravina in the Murgie area and its history (2:50 min onwards)

• Beniamino talks about the Gravina DOC white wine (8:10 min onwards; at 18:00 min – about their promotion of Gravina DOC)

• Beniamino talks about the native grapes they produce (circa 11:50 min onwards)

• Beniamino talks about their replanting of vineyards after they took over the winery from the cooperative (circa 21:00 min)

• Talking about the different wines they produce (22:50 min)

• A Question from Cathie Jenks Schafer about the Passito wine that Botromagno produces. (43.04 min)