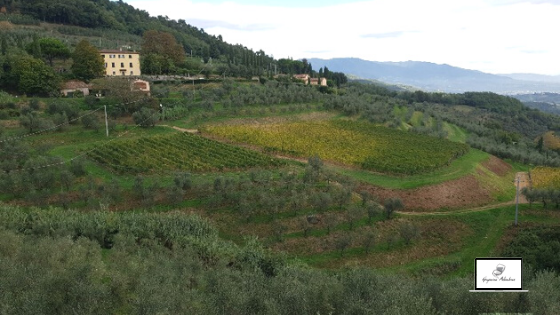 Villa Santo Stefano is a small estate on the hills of Lucca where the German top-level automotive executive Wolfgang Reitzle and his wife Nina Ruge, journalist, TV presenter, and author, have made their dream of Italy come true. With a clear-cut and precise vision, they have turned their small corner of paradise close to Lucca into an estate rooted in Tuscan tradition combined with an innovative approach. I have had the opportunity to taste their wines twice under the guidance of their estate manager Petra Pforr and their oenologist Alessio Farnesi. The first time was virtually last summer and then I went to visit them last year in October.

When it comes to this dream of Tuscany, it all started in 2001 as a Tuscan holiday place for Wolfgang and Nina, co-owned together with another German couple. Nina Ruge says that they went a bit crazy at the beginning with their investment ideas and they wanted to venture into winemaking. Their friends and co-owners were not interested in the wine side, so Wolfgang and Nina bought them out and took over the entire estate. They were very convinced and set in the highest gear on their journey to become full-fledged wine and olive oil producers. Wolfgang Reitzle wanted, and still wants, to take the development step by step to grow slowly. For him, it is important to gradually achieve excellence to the best of their abilities.

The estate includes vineyards, olive groves, an old barn converted into a luxury villa for rent, other old buildings turned into mini-apartments rented out as luxury vacation homes, and a magnificent Tuscan villa where Wolfgang Reitzle and Nina Ruge themselves reside when they are in Tuscany. The main villa previously belonged to the Bertolli family and, in fact, Wolfgang and Nina bought it from them. The villa was indeed called Villa Bertolli, after the historical olive oil producing family from Lucca, but as the Bertolli family had sold their brand name to Unilever (since then the Bertolli brand has changed hands again and is now a part of Deoloeo, a Spanish multinational company) Wolfgang and Nina had to come up with another name for the estate. The Santo Stefan church located next to the villa gave them the idea to rename the estate to Villa Santo Stefano.

Tuscan Wine on the Hills of Lucca…

Lucca is an area in Tuscany that has been lesser-known until recent years when it comes to wine. This does not mean that it lacks in viticulture and winemaking traditions, just that it has been less on the radar than other areas such as Chianti Classico, Montalcino, etc. Still, DOC Colline Lucchesi was one of the first DOCs instituted in Tuscany in the 1960s, namely in 1968. In the beginning, the DOC covered only a red wine – Colline Lucchesi DOC Rosso – where Sangiovese is the main grape (45-80%). However, the Rosso wine can include also Canaiolo, Ciliegiolo, Merlot, Syrah, and other local red grapes according to different percentages. Even a maximum of 5% of Aleatico and Moscato is allowed. Further on, in 1985 the denomination branched out with a white DOC and since then six other wine categories have been added to the DOC.

In 2016, Lucca Biodynamics was founded which is a network for biodynamic farming and includes wineries but also olive oil, honey, and vegetable producers in the area. This has put the hills of Lucca on the global wine map during the last few years. Villa Santo Stefano is therefore in an area where they are a part of a bigger community. Both Petra Pforr and Alessio Farnesi say that they have a good relationship with the other wine producers in the area and they have a common objective to promote the local area. Villa Santo Stefano is certified organic in the vineyard since 2020 and from 2021 they will be organically certified in the winery too.

Villa Santo Stefano comprises 7-8 hectares of vineyard plots where they grow Vermentino, Cabernet Sauvignon, Merlot, Petit Verdot, Alicante, and, of course, Sangiovese. They make five different wines, namely Gioia Vino Bianco IGT, Luna Vino Rosato IGT, Sereno Doc Colline Lucchesi, Volo Vino Rosso IGT, and Loto Vino Rosso IGT. The first four have the same logo as in 2014, Nina, Wolfgang, Petra, and Alessio set in motion their plan to extend the selection and produce other wines than the Loto. They had the staff from a graphic agency in Milan come down to have a look around the estate to come up with ideas for a new logo. They realized there were a lot of “wings” present a bit everywhere in the architecture around the villas and the grounds, therefore, they suggested the logo with the wing design. It is a logo that looks modern and fresh at the same time as it links back to the estate and its tradition.

The first wine with the new logo, in 2014, was Gioia which is their 100% Vermentino wine that is a Vermentino in between a Colli dei Luni and Maremma style. It is very mineral and salty but it also has a slightly aromatic touch. It is a wine to be enjoyed young, however, Alessio says that it also has some aging potential. Vintages with a couple of years on the neck have a very nice structure and notes of hydrocarbon that, for example, is so typical for aged Riesling and Chardonnay wines. Alessio stresses that this is in part due to the soil being very rich in clay.

Two red wines where Drinkability & Tradition are the Common Denominators

The Sereno Doc Colline Lucchesi is a red wine right to my taste where the Sangiovese is the dominant grape (80%) and the rest consists of other local grapes such as Colorino, Canaiolo, and Ciliegiolo, making it remain close to the Tuscan and Lucca tradition. They started making Sereno after they in 2015 had acquired the Sangiovese vineyard that is located right in front of the villa. I tasted the 2018 vintage which is a fresh and smooth wine where you feel that the maturation for one year in big casks has made all the difference for the Sangiovese. The Sangiovese lots are divided into two different big barrels and only blended at the end. It is a Tuscan wine in a classic Tuscan style.

The Volo Vino Rosso IGT is made with international grapes but still, it can be said to be a Tuscan wine connected to the history of the area. In the late 18th and early 19th centuries, parts of Tuscany were occupied by Napoleonic troops. Especially, as regards Lucca, Napoleon Bonaparte handed over the principalities of Lucca and Piombino followed by the granduchy Massa and Carrara to Felice Baciocchi in 1805 and 1806. Felice was married to Napoleon’s younger sister Elisa Bonaparte Baciocchi and it was she who in reality governed the principalities and was elected Grand Duchess of Tuscany in 1809. Therefore, the winemaking with French grapes in the Lucca area is nothing new.

Volo Vino Rosso IGT 2019 is a blend of 50% Petit Verdot, 25% Cabernet Sauvignon, and 15% Alicante that only matures in cement tanks after the fermentation in steel. It is a way to make a lighter entry-level Supertuscan version that stands out for its drinkability. It is a very fresh and fruit-forward wine, for example with notes of raspberry and wild berries, spicy (coming from the Alicante), and with a good grip thanks to the tannins. It also has a side of chalky notes, almost with a sense of face powder such as the women in past times used, that Alessio says comes from the soil as well as from the cement tanks. I think this is a very nice Tuscan wine to enjoy for an aperitivo as well as with all types of food.

The first wine Nina and Wolfgang decided to produce was their Loto in Supertuscan style. Wolfgang loves the Bordeaux wines and the Super Tuscans from Bolgheri, so, therefore, he wanted his first Tuscan wine to be in a similar style and reflect his own taste. 2006 was the first vintage of Loto and I was lucky enough to get to taste it when I was visiting them back in October last year. We had first been tasting Loto 2018 in the morning when we tasted through the different wines they produce and for lunch, Wolfgang then brought a bottle of their Loto 2006. I feel very fortunate to have been able to taste both vintages and to understand the extraordinary evolution of this wine over the years. 2006 is a true Bordeaux-style wine pre-2000 with a lot of power, body, and oaky influence, however, it is a fascinating full-bodied red wine that tells a story about the local territory. It has lovely notes of ripe fruit, spices, chocolate, toffee, and a touch of herbs and forest floor.

The 2018 has a completely different style and also shows how Villa Santo Stefano has developed in line with the times and has turned into a fresher and more modern style where the grape varieties are more in focus. This does not mean that it has lost its expression of power, rather it is channeling its power towards elegance, finesse, and drinkability. 2018 was indeed a watershed for the Loto wine from aging it in barrique for 18 months to maturing it only for one year in the barrique, followed by six months in cement tanks and then letting it settle for one year in the bottle. The six months in cement smoothens out the wine, eliminates the excess of oak and vanilla, and keeps its fruit-forwardness, freshness, and elegance at the center.

Villa Santo Stefano is a winery in a stunning location…

…where they produce Tuscan wines that are very linked to the local territory. They have been developing their winemaking gradually to arrive at the high quality they have aspired to from the start. It is a wonderful estate where Italy meets Germany which has resulted in a dynamic mix of tradition and innovation. At Villa Santo Stefano, it is not only about wine but they are also producing award-winning olive oil and offering luxury vacation homes for rent. Next time you are in Tuscany, go pay them a visit to get the full-immersion experience.