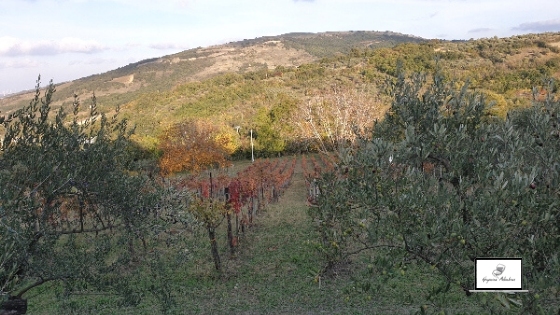 The Tuccanese grape from Puglia has been on my mind for quite some time, and as you know by now I am a sucker for lesser-known and somewhat obscure grapes and wines. When the topic in the Italian Food, Wine, and Travel group was decided to be about Sangiovese Wines Around Italy…I just knew I had to write about the Tuccanese. However, it is not a very easy wine to find. There are only a couple of producers in Orsara in the Dauni Mountains in Puglia that produce this very unique wine.

I have been to Orsara in Puglia a couple of times, the last time in autumn 2021 when I visited Leonardo Guidacci, the Tuccanese vintner that I will write about here. What is funny is that one of the times I was in Orsara, I went to the D’Araprì 40th-anniversary party at Villa Jamele of the chef Peppe Zullo without knowing he produces Tuccanese wines too. When I wrote this article in spring 2020 during the early pandemic, I had not yet visited Leonardo Guidacci and I remember I needed to get hold of the Tuccanese wine fairly quickly to write this article. I then found out that a small wine bar in Florence is selling this very special wine that is produced by Leonardo Guidacci in the Dauni mountains in Puglia. The wine bar was Vineria Sonora where I bought two bottles of Magliano Daunia IGP 2016.

The theme this month, June 2020, is Sangiovese Wines Around Italy in the Italian Food, Wine, and Travel (#ItalianFWT) group. As mentioned above, I will be focusing on Leonardo Guidacci who produces Tuccanese wines in Orsara in Puglia. I will talk about his Magliano Daunia IGP 2016 in this article.

Tuccanese – The Treasure Grape of Orsara in Puglia

There is not really that much written about the Tuccanese grape. After it was considered by some to be related to Perricone and by others to Piedirosso, it rather turned out that it is related to the Sangiovese. Attilio Scienza writes in his La stirpe del vino, that a DNA test has indeed shown that Tuccanese corresponds to the Sangiovese grape.

Sangiovese that is the grape with a big G in Tuscany and to a certain extent in Emilia-Romagna also has, as Attilio Scienza argues, turned out to have its origin in southern Italy. So far it is considered that Gaglioppo and Nerello Mascalese have similar cultivars to the Sangiovese. Read more about Sangiovese in my article A Unique Terroir in Modigliana – A Paradise for Sangiovese.)

In the article Il vitigno quasi sepolto in the magazine Bibenda, Manuela Mancino argues that it was the family Majorca-Strozzi that brought the Sangiovese to Orsara in Puglia. But she does not say in which century and she does not state any reference to the source of this information. The Istituto Sperimentale per la Viticoltura di Turi in Puglia as well as Leonardo Guidacci’s oenologist, Mauro Cappabianca, are working on doing further research into the Tuccanese grape. (See Un Sangiovese made in Puglia in la Repubblica.)

The Grape and the Winery with the Same Name – Tuccanese

Leonardo Guidacci calls his winery Vitivinicola Il Tuccanese, and the cellar is located right in the center of Orsara in Puglia where it has been dug out in the tuff 6 meters below ground. This is where he ages his wines in oak barrels and then lays them down in the bottle until the wine settles. Both Orsara and the wine cellar are really beautiful and picturesque places.

The 2-hectare Tuccanese vineyard plot is located on rocky soil at 500 meters altitude in the Dauni area. He is also organically certified. Leonardo told me that the vineyards belonged to his family and that he decided to take over the management in 2000 after he finished his studies in architecture. His idea is to produce wine – a Tuccanese wine – that is a true expression of the Daunia territory.

The area around Orsara di Puglia is not only located in an area with a hilly and almost mountainous landscape but also, I believe, surrounded by forest. When ‘putting’ the nose in the glass with the Magliano Daunia IGP 2016, I felt notes of forest, shrub herbs, moss, and other green notes… which made me feel like I was back in northern Puglia. There are, of course, also notes of red fruit such as ripe cherry and plum, followed by spices. The vanilla comes out after a while, probably from the oak. The wine matures in oak for at least three months. On the palate, it has good acidity, body, and a well-balanced taste. The tannins are there but rather smooth.

Tuccanese is a wine I recommend you to try if you have the occasion, as it is a very interesting and particular wine.