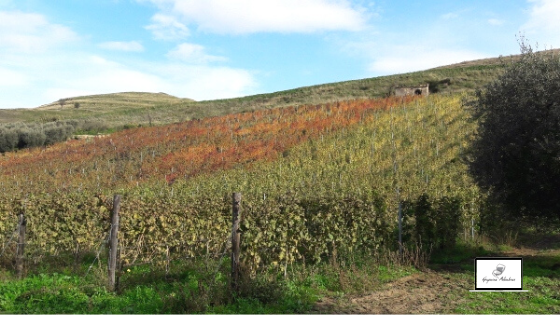 Buon Anno! 2022 starts out by talking about how a glorious past of viticulture can reinvent the future of Aglianico in Basilicata in the Italian Food, Wine, and Travel group. We take a closer look at Aglianico del Vulture, especially, but also Aglianico from Campania. Camilla of Culinary Cam had the great idea of watching the film From the Vne together and from there discuss Aglianico and Basilicata. This helped us look upon a territory from a new and interesting angle, not only focusing on a food pairing but having the possibility to dig deeper. My contribution this month will focus on Antonio Cascarano at the Camerlengo winery in Rapolla in Basilicata.

From the vine – Back to the Tradition

The movie From the vine tells the story of Marco Gentile, played by Joe Pantoliano, who was born in Acerenza in Basilicata in Italy but then emigrated with his mother to the US as a child. When he married he moved with his wife to Toronto in Canada where he then further on became the CEO of a big car manufacturer. During the years he has alienated his wife and his daughter by being too busy and single-minded to have any time to spend time with them. Success meant more than time with family and friends. When he is more or less forced to resign because of his conflicting projects to make the company environmentally responsible, he finds himself with lots of time on his hands. Marco starts thinking about his life, what is really important, which brings him to look back towards his roots in Basilicata in Italy. He reconnects not only with his family’s past but also with a slower life and a viticultural past and its traditions. We can here draw the lines a bit also to the last two decades in viticulture and winemaking in Italy where there has been a tendency to start valorizing local grapes, viticulture, and winemaking traditions.

Antonio Cascarano – The Past Becomes the Future in Basilicata

Antonio Cascarano started the Camerlengo winery in 2001 in his small home town Rapolla in Basilicata. The name of his winery – Camerlengo – comes from the Camerlengo of the Santa Sede, i.e. Holy See. Back in the era of Frederick II, the Holy Roman Emperor, the people of Rapolla remained faithful to the Pope during the fight between Guelfi (pro-Pope) and Ghibellini (pro-Frederick II), and as a token of the Pope’s gratitude, he donated land to the village of Rapolla. The piece of land was named Camerlengo. To connect to the important local history on the land where his vineyards are located, Antonio has named his winery after this historical event.

In the early 2000s, Antonio was living in Rome where he was working as an architect when he decided to move back and recuperate his grandfather’s old vineyard plots. Marco Gentile’s story is fairly close to Antonio’s own here, minus the Canadian and the corporate parts. Antonio restructured the oldest vineyards and then also planted new ones with shoots from older vines. The native grapes Antonio found in his grandfather’s vineyards were Malvasia di Rapolla, Santa Sofia di Fiano, Cinguli, and Aglianico. Cinguli is an old local grape that is not registered in the national registry. Antonio says that it is a grape with high acidity that was often blended with Aglianico and Malvasia, also for making sparkling wine. He continues to say that it is similar to Trebbiano Toscano. The old vineyards are divided into three different plots – Piano di Croce, Toppo d’Avuzzo, and Rendina – with different soil characteristics and altitudes.

This is the oldest vineyard plot with 40-45 yeard old Aglianico vines on volcanic soil located at 600 meters of altitude. It is from this plot that Antonio makes Camerlengo, his flagship Aglianico wine.

This is a vineyard that is younger – about 20 years old – with Aglianico, Santa Sofia, Malvasia di Rapolla, and Ciguli vines at 400 meters altitude. The soil is a mix of volcanic, calcareous, and tuff. It is from these vines that he produces the Accamilla, Juiell, and Antelio wines.

This is the third and smallest vineyard plot where the soil is also a mix of volcanic, calcareous, and tuff just as in the Toppo d’Avuzzo vineyard. Here he grows Santa Sofia and Cinguli grapes with which he makes Jinette, his latest wine label that is named after his wife.

I met Antonio Cascarano and tasted his wines in the courtyard of the castle in Melfi in Basilicata during Radici del Sud for the first time some years back. It was a super-warm day in June with no shade to be found during the tasting but, still, it could not stop me from liking his wines. I was fascinated when he told me about his wine cellar that is a cave carved out in the rock on the slopes of Vulture. His wines were like a breath of fresh air in the midst of the scorching hot sun. (See my previous article One Big Wine Family – The Essence of #RadicidelSud in Puglia.)

Antonio Cascarano’s vision is to make wines in Basilicata that communicate a “great territory, great quality of grapes, and a great (able) vintner”. He makes artisanal, low intervention wines but, furthermore, he underlines that for him it is important to make wines that are following the vintages, i.e. are different from year to year, and that have nice and pleasant aromas as well as taste. The wine should not have funky or strange aromas or tastes, rather he stresses they should be pleasant and enjoyable both on the nose and the palate. This might be why I like his view upon making wine and his wines, of course, because it is indeed not enough to say that you make ‘natural wines’, the wines need to be good and pleasant to smell and to taste. What is the point otherwise?

When talking about vintages, the question of climate change also enters the discussion. Antonio says that he has noticed considerable changes in climate during the last years, as 20 years ago the harvest started at the end of October/beginning of November in Vulture while it starts much earlier nowadays. He continues to stress that the vintages in the past were more balanced while the last years have shown more erratic weather conditions with too warm temperatures in February to then turn cold again in April/May. This, together with long periods of rain or summer heat, stresses the vine in an unnatural way and makes it difficult to keep the grapes healthy and of good quality.

Antonio has decided to make wine outside the DOC appellation in Basilicata since about 10 years, to be able to produce wine according to his own vision and conviction. In the vineyard, he uses as little copper and sulfur as possible, and lately, he has started to replace the sulfur with citrus extract to protect against downy mildew. The copper is more dangerous for the plants and the soil if used in too high quantities, but he tries to use it as little as possible. In the winery, he applies wild fermentation, uses natural yeast, no filtration, and no fining when making his wines. He makes five different wines by now, namely Jinette, Accamilla, Juiell, Antelio, and Camerlengo.

Jinette, his latest label, is an ancestral method sparkling wine with refermentation in the bottle – “col fondo”. It is a blend of Santa Sofia and Cinguli grapes, the latter one giving the needed acidity to the wine. I haven’t had the occasion to taste this sparkling wine yet but I am very curious to do so. Accamilla was the third wine he created and it is named after the dog that was Antonio’s trusted companion – his shadow – as she followed him everywhere he went. He wanted to dedicate an extreme wine to her and created a macerated white wine made with a blend of 60% Malvasia di Rapolla, 20% Santa Sofia, and 20% Cinguli that after over maturation on the vines macerate on the skins for 15 days in open chestnut vats. Thereafter, the juice matures in tonneaux of Slavonian oak for a couple of months before it is bottled. It is a wine with an explosion of aromas from the volcanic soil and tuff to floral, fruity, and herby aromas such as broom, apricot, and honey. Its freshness, minerality, and saltiness add to the unique character of an “orange wine” from the south.

Juiell is his 100% Aglianico rosé wine that was named after his ex-girlfriend. It is a rosé wine that after a light pressing rests and macerates without the skins in old barriques for 90 days. When it comes to his red wines, they are both fermented in open chestnut vats. Then, Antelio continues the maturation in large chestnut casks of 40-50 hectoliters while Camerlengo matures first in large chestnut casks for a year and thereafter in tonneaux of Slavonian oak. They are both structured red wines with intense notes of red fruit, a floral touch of violet and/or rose, spices, forest floor, and much more. Camerlengo is more powerful and full-bodied as a wine.

When Fiction and Reality Flow Together…

…we can see how the re-evaluation of the past and its traditions can reinvent the future. This happens not only in the movie From the Vine regarding Basilicata but is what has become a trend during the last 20-30 years in the wine world. The super-pumped commercial wines made to appeal to certain international tastes have started to become something of their own past in favor of giving value to agricultural and viticultural traditions that had gone lost.

Wine and agriculture, in general, is now more focused on being organic and biodynamic, artisanal, healthy, and low intervention in the sense of not using any synthetic additives. Slow life choices are combined with healthier choices. Both Marco Gentile and Antonio Cascarano are examples of how a return to their home regions and to recuperate the family land give value both to their own lives and families and to the local community – fictional as well as real.

See the other writer’s articles: