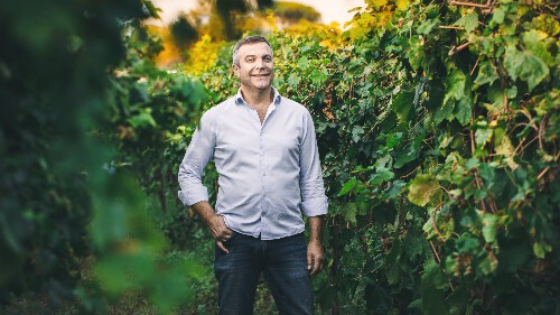 Caprettone is a grape native to Vesuvius that has shown to have an extraordinary potential for winemaking in Campania, also when it comes to sparkling wines. Vesuvius is not only known for its eruptive activity through the years, but also for its unique and very expressive viticultural heritage. As in general in recent years, there has been a more intense focus on volcanic wine and autochthonous grapes also on Vesuvius. Caprettone is one of the grapes that is deeply rooted on the slopes of Vesuvius and in its history. In this context, Casa Setaro is one of the wineries that have valorized and given a voice to Caprettone as a grape that can stand on its own two feet. This is valid both in still white wines and in sparkling wine made with the Champenoise method. In the past, Caprettone was more used in blends with other grapes in the DOC appellation Vesuvio bianco and Vesuvio Lacryma Cristi bianco.

I visited Casa Setaro in Trecase during Campania Stories last year tasting their volcanic wines with an amazing view of Vesuvius in the background. Earlier this year, I was also invited to a lunch in Naples where they officially presented their Pietrafumante Brut Nature Millesimato 2016 that has rested 48 months on the lees. Pietrafumante has an exceptional character that draws your thoughts to that mythical air of Vesuvio, not only for its place in history and the legends that surround it but also, in February, for a sense of escape from a world in lockdown that it gave us. A sparkling trip to a sunny Naples to taste Pietrafumante Brut Nature Millesimato was a true injection of energy in the midst of a pandemic world.

Read on to find out more about Caprettone, Casa Setaro, and winemaking on Vesuvius.

Casa Setaro: A Winery Giving An Expression to Native Grapes on Vesuvius

Massimo Setaro took over Casa Setaro, the family winery, on Vesuvius in 2004 together with his wife MariaRosaria De Rosa. He had a rich viticultural and winemaking heritage to lean back on thanks to his father Vincenzo Setaro. The winery that is organically certified comprises 14 hectares of vineyard plots on sandy soil that are located on the southern facing slopes inside the National Park of Vesuvius. There they grow Caprettone, Falanghina, Piedirosso, and Aglianico that are used to produce wines with great character. For fermentation, maturation, and aging, they mainly use steel tanks, big oak casks, and tonneaux but have also started experimenting with amphora. Casa Setaro also stands out for producing a sparkling Caprettone wine with the Champenoise method. More about this further below…

Did you know that there is an interesting particularity about their winery building?
The wine cellar has, in fact, been dug out in the volcanic rock right under the house where Massimo and his family live. The volcanic rock was formed during the ‘great’ eruption in 79 AD.

Caprettone is probably a grape in Campania that until recently was quite unknown for the world at large because it was often confused with Coda di Volpe. In fact, Caprettone used to be considered the same as Coda di Volpe, i.e. just another name used locally for Coda di Volpe. Ian D’Agatha thinks that many wine producers on Vesuvius probably were growing Caprettone in their vineyards in the past, but said they were growing Coda di Volpe because the latter one is more well-known. In any case, the form of the grapes is different as the grape cluster of the Coda di Volpe is formed similar to a foxtail while the Caprettone has small and a bit thin grapes. The Caprettone grapes look like the beard of a goat, thereof the name. (See Ian D’Agatha, Native Wine Grapes of Italy, pp. 230-231)

Research has shown though that Caprettone is a grape variety all on its own and since 2014 it is registered in the Italian national registry for grape varieties (Registro nazionale delle varietà di vite). Caprettone is considered to be related to Ginestra, a local white grape variety, and Piedirosso. (D’Agatha, pp. 230-231.) Massimo Setaro says that he and other producers on Vesuvio worked hard to get the Caprettone acknowledged and registered in the national registry. Already, Massimo’s father Vincenzo had worked to maintain and safeguard local varieties in the past.

Viticulture on Vesuvius dates to ancient times and, in my opinion, it is therefore important to also give the attention to local grapes that they deserve. I believe that already Plinius the Elder mentioned Vesuvius and its viticulture in his Naturalis Historia and, furthermore, it has also been written about in Italian and international literature. The Roman poet Virgil, for example, talked about fertility while Strabo described it as a mountain rich with vines.

What is, moreover, unique with Vesuvius and its volcanic soil is that most of the vines are ungrafted and were never affected by the phylloxera. Another interesting thing, is the often used method of ‘propaggine’, i.e. the propagation, or ‘offshoot’, method. Massimo Setaro showed us this in his Piedirosso vineyard plot just next to his house when I was visiting his winery. He explained how this means that a branch of the mother vine is layered into the ground to give life to a new vine. When the new vine has developed its own root system the connection to the main vine is severed.

Now, let us get back to talk about Pietrafumante, a pure Caprettone sparkling wine…

Massimo Setaro has been at the forefront when it comes to producing sparkling wine made with Caprettone on Vesuvius in Campania for years. He produces the Pietrafumante Caprettone Spumante Metodo Classico that rests on the less in the bottle for 30 months on a continuous basis. This year, as I mentioned above, he also introduced a version where the Caprettone wine rests on the lees for 48 months to, even more, show the excellence of this native grape. In Naples earlier this year, Massimo said that

This becomes clear when you taste the Pietrafumante as well as his white Caprettone wines Munazei and Aryete where you, of course, have the volcanic imprint but also so much more. Aryete is matured in amphora and Massimo stated how the skin contact in amphora enhances the structure, complexity, and aromas.

Returning to Pietrafumante, it is a sparkling wine with complex floral notes, such as camomille, Mediterranean flora, and broom which as I understand it seems to be typical for Vesuvius. Giacomo Leopardi, in fact, praised the broom (ginestra) on Vesuvius in one of his poems called just La Ginestra. Pietrafumante also has lovely notes of citrus fruit, apple, peach, dried fruit, honey, and an almost lightly caramelized touch. As it ages, Massimo mentioned that it has a tendency to become sweeter with more pronounced notes of resin, honey, and candied fruit.

Massimo furthermore explained that Caprettone has never been considered as a grape particularly suitable for making sparkling wine because it has lower acidity than, for example, Fiano and Greco, but still it has a decent level of acidity. Pietrafumante indeed has a wonderful freshness. It also has a good minerality and Massimo stressed that there is a lot of potassium in the soil on Vesuvius. Pietrafumante has a slightly bitter aftertaste of almonds as well and I learned that this is another typical trait of Caprettone wines.

To read more about volcanic wines from Campania, see my article 3 Wineries & 3 Fascinating Expressions of Wine in Campania.

Caprettone and Vesuvius – A Winning Combination

Caprettone is indeed a grape that is closely linked to the viticulture on Vesuvius. Even though it in the past was not that well known, and still perhaps is not the first grape you come to think of when wanting to drink wines from Campania, it has come a long way. A lot of effort has really been made by the local producers to valorize this grape as something more than a grape to use in a blend with other grapes such as Falanghina and/or Verdeca. The volcanic soil brings out the best in the Caprettone grape. It is a grape that has found its place also in a sparkling format, especially with the Champenoise method.