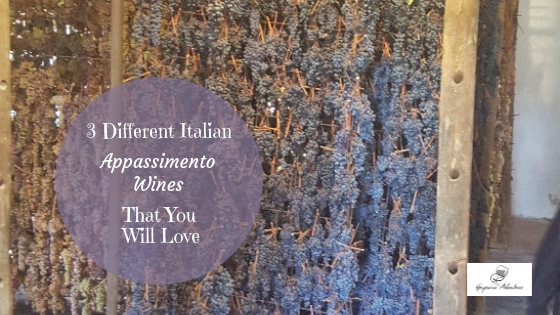 September is as you might have guessed by now the month of passiti, or wines made with the appassimento method, in the Italian wine, food, and travel group. The title of this month’s theme is Appassimento all’italiano, Sweet Wines at Their Best. I apologize for being late with my article, unfortunately, some other things got in the way, so I did not manage to publish it the other Saturday.

As we discussed in the earlier invitation and preview articles, the focus is on wines that have undergone the process of appassimento (dehydration), i.e. that the grapes are dried or raisinate according to different methods. The appassimento methods can be described as follows:

The duration of the appassimento period can vary much depending on tradition, region, and appellation rules. Usually, the grapes are dried around 2-4 months. The grapes, furthermore, need to be suitable for appassimento by having high acidity level and resistant skin.

Let us have a closer look at the three wines I will talk about in this article. I have chosen three different sweet wines made with the appassimento method and with different grapes, namely

Below, you can get a direct glimpse into the drying room at Tedeschi winery, where they are soon going to put the harvested grapes…

Recently, I was invited to visit Tedeschi winery in Pedemonte di Valpolicella in Veneto to learn more about their winemaking. Tedeschi winery is one of the historical Amarone wineries in Valpolicella, in fact, they have been vine-growers and winemakers for almost 400 years.

Riccardo Tedeschi showed me around some of their vineyards, such as La Fabriseria from where they source the grapes for their Amarone wine with the same name. Then, I got to taste their different wines together with his sister Sabrina Tedeschi. Today, it is the siblings Sabrina, Antonietta, and Riccardo Tedeschi who run the show even if their father Lorenzo Tedeschi still keeps a watching eye over the business.

Sabrina told me that their father who is around 80 years old still rides his bike every day for a certain amount of kilometers in the surrounding countryside (even though an electrical bike by now).

Anyway, I will write more about Tedeschi winery in a coming article.

This Recioto is a blend of 30% Corvina, 30% Corvinone, 30% Rondinella, and 10% that is a mix of Rossignola, Oseleta, Negrara, Dindarella, Croatina and Forselina.

The grapes for the Recioto wine are harvested in late September or early October and then dried in crates in a ventilated drying room for circa 4 months. Chris Mercer writes in Decanter, that according to the Consorzio 50-60 days would be enough for Recioto wine but that often more than 100 days of appassimento is needed. (See Recioto della Valpolicella vs Amarone: What’s the difference? in Decanter)

Capitel Fontana Recioto is a sweet wine that is very structured with lovely notes of fruit such as mulberry and raspberry. It is a fine and elegant wine where the aging for two years in barrels of Slavonian oak contributes to its completeness.

The sweet wine in question here is a Vin Santo di Carmignano Riserva DOC and the grapes used by Capezzana are 90% Trebbiano and 10% San Colombano. In fact, according to the regulation, Trebbiano toscano and/or Malvasia bianca lunga should be used to a minimum of 75%. Then other local grapes in Tuscany can be used up to a maximum of 25%.

The grapes used for the Vin Santo di Carmignano needs to have been produced within the area of Carmignano and Poggio a Caiano in the province of Prato in Tuscany. The grapes need to appassire (be dried) up until at least 1 December of the harvest year and no longer than 31 March of the following year.

The result here is a very complex Vin Santo di Carmignano Riserva DOC 2011 with notes of apricot, dry and candied fruit, orange blossom, honey, a floral touch. It has a smooth, structured, and fruity taste without ever being overbearing in its sweetness. A sweet wine you can pair both with desserts and aged cheese I would say, the latter especially if an older vintage.

Earlier this year, I visited Capezzana thanks to Filippo Contini Bonacossi and met his sisters Beatrice and Benedetta, as well as the niece Serena and nephew Gaddo. Together with Bendetta I got to explore their barrel rooms, including the Vinsantaia.

Even though it has nothing to do with the Vin Santo, but…
Did you know that one of the barrel rooms in their historical wine cellar was closed off with a plastered wall during World War II to hide the wine from the Germans?

Capezzana is filled with history and one of the most impressive estates not only in Carmignano but in Tuscany. In fact, there is a document that demonstrate that wine has been produced at Capezzana since 804 D.C. The document in question is now framed and hanging on a wall in one of the buildings, just in front of the entrance down to the wine cellar.

We have now arrived at the third sweet wine I wanted to talk about in this article, namely Collezione Jazzisti IGP Murgia Bianco Passito. This is probably the least known sweet wine of the three, both in Italy and abroad.

It is made with the grape variety Minutolo that is native to Puglia. Up until the early 2000s, the Minutolo was considered to be the same as Fiano or a subvariety to Fiano. It was then called Fiano Minutolo. However, DNA research has shown that it is a separate and distinct variety and since 2009 it is officially called Minutolo and should not be confused with Fiano.

Minutolo is a white aromatic grape variety that produces wines that are fresh, mineral, savory, and with a light body. The promoter of the research into this grape during the last decades has been the oenologist Lino Carparelli who today has the winery I Pastini (a winery that has a trullo tucked in between the vineyards and you get to visit it on the winery tour there…cool, eh!) close to Locorotondo in Valle d’Itria. In fact, Valle d’Itria is one of the main areas in Puglia where this grape is grown.

Let us get back to Mazzone winery, that was founded in the 1970s when Domenico Mazzone inherited land with vineyards, olive groves, and orchards. Today, it is his sons Francesco (whom I have met) Giuseppe and Massimo who runs the winery.

It was in 2004 though when Francesco, who by then had finished his studies in enology, started taking over the activity that they really kicked off their production of bottled wine.

First out was the white wine label Immensus 2004 made with Malvasia bianca. Last year, at the press tour #TerroirPuglia, I tasted their Immensus from 2004 but was not really aware that it was their first vintage of this wine. The 2004 was just amazing! Then further on in 2011, in connection with the participation at New York Wine Week, they launched their passito Collezione Jazzisti.

The Minutolo grapes are dried in crates outdoors in the sun before they are pressed. I am not sure for how long, but I would guess a week or 10 days, max a couple of weeks. As you can see this is yet another way of drying grapes after their picking, here in crates but out in the sun.

It is a sweet wine where you indeed feel the aromatic side of the Minutolo grape, with quite intense floral notes, orange blossom, a honey-like touch, and a herby undertone that recalls the Mediterranean flora. It is a wine that can be paired with desserts but they also call it a meditation wine. Just as its name suggests, it is indeed a wine to be savored while listening to your favorite music, may it be jazz or any other genre.

The wine writers participating in this month’s theme have chosen their wines and they will take us on an interesting journey through Italian wines made with the appassimento (dehydration) method.

Jennifer at Vino Travels will share “An Amarone Pairing with a Visit to Brunelli”
Jeff at Food Wine Click will share “Dip Your Biscotti in Montefalco Sagrantino Passito“
Linda at My Full Wine Glass will share “Passito and peaches –perfect late-summer fare (#ItalianFWT)”
Camilla Mann at Culinary Adventures with Cam will share “Polpette al Forno + Sartarelli Verdicchio Passito 2013”
Wendy Klik at A Day in the Life on the Farm will share “Appassimento Method explained in Layman Terms”
Kevin Gagnon at Snarky Wine will share “Great Sweet Wines of the World Part 2: Passito”
Cindy at Grape Experiences will share “Italian Night? Pair Appassimento from Abruzzo with Homemade Wild Mushroom Ravioli“
Nicole at Somm’s Table will share “The Sweet Side of ILatium Morini: Sette Dame Recioto di Soave Classico with an Old-Fashioned Strawberry Cake“
Gwendolyn at Wine Predator will share “Pasqua Puts a Little Love in Your Life Part 2: White and Red Appassimento“
Katarina at Grapevine Adventures will share “3 Different Italian Appassimento Wines That You Will Love”