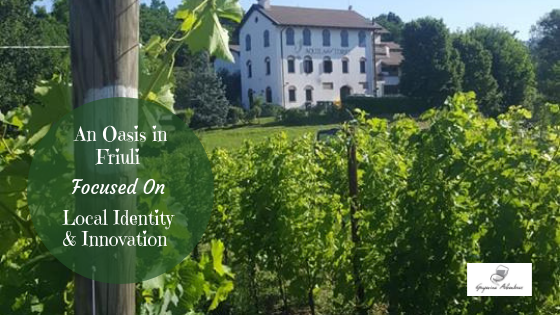 My first in-person encounter with Aquila del Torre winery was at a lunch they invited me to last year to learn more about their wines. I had come across their wines before but until then I did not know that much about their wine story.

What is Aquila del Torre you might now think, right?

Aquila del Torre is a winery located close to Povoletto in the province of Udine in the region Friuli Venezia Giulia. Povoletto is one of the communes included in the area of the Friuli Colli Orientali appellation. The so-called ‘capital’ of this appellation is considered to be Cividale but Povoletto is in no way less important.

On the website of Consorzio Tutela Vini Friuli Colli Orientali and Ramandolo, it is stressed that this is still an area all to discover. Apart from Cividale, I do believe that it is not that well-known outside the regional and national borders. An area that produces top wines such as Friulano, Picolit, Ramandolo, and Rosazzo, to not mention the red wines…how can it not deserve to be better known to the world?

To give you a better idea, Friuli Venezia Giulia is the region in the north-eastern corner of Italy. It is the Italian region that borders with Slovenia in the east and Austria in the north. For the rest, its borders are with Veneto and the Adriatic Sea.

There are about 20,000 hectares (almost 50 000 acres) of vineyard planted in Friuli Venezia Giulia and more than half of these areas are focused on white grape varieties. In the Friuli Colli Orientali area specifically, there are approximately 2000 hectares (more 5000 acres) of planted vineyard.

Do you feel curious about learning more about Aquila del Torre winery in this fascinating area that is Friuli Colli Orientali?

The theme this month, August 2019, is The Charms of Northeast Italy in the Italian Food, Wine, and Travel (#ItalianFWT) group. As briefly mentioned above, I will be focusing on Aquila del Torre winery in the Friuli Colli Orientali area. More specifically, this will be a way also to talk about two of their wines that might be less known to the wider public.

On Saturday, August 3, you can join us on Twitter at 11amEDT / 17.00 CEST to learn more about food, wine, and travel in relation to wines from Northeast Italy. Just type in the hashtag #ItalianFWT in the search field and click Enter, thereafter, you click Latest which will show you all the live tweets.

At the lunch some time ago, with Michele Ciani, the owner of Aquila del Torre together with his father Claudio Ciani, told us that they are located quite in the northern part of the Colli Orientali hills. A bit outside the wine tourism routes.

When I talked to Michele on the phone this week again to get some more updated info, he re-emphasized that they are further north than many other wineries. He said that they are in a more sub-alpine area both geographically and when it comes to climate conditions.

Michele and his father bought the Aquila del Torre estate in 1996 to then in 2002-2005 reorganize the vineyards and the wine cellar building. They recuperated older vineyard plots from the 1960s, mainly Tocai Friulano and Picolit, as well as replanted new vineyards.

The farm or estate produced wine also before it was bought by Michele and his family but in a less organized manner. Under past ownerships, the farm was also into breeding animals such as cows, pigs, sheep, etc.

Where does the name Aquila del Torre come from?

Michele explained that the farm had changed names several times in the past but they decided to keep the name the estate had in the 1990s. They thought it was a suitable name as ‘Aquila’ symbolizes that they are high on a hill monitoring or ‘flying’ over the surrounding landscape and ‘Torre’ because they are situated in the locality Savorgnano del Torre.

The soil is here flysch, just as in the Collio area. Flysch, or ponca, is a soil type that consists of arenaceous and marly stratifications from the Eocene era. It is a very poor soil where the vines need to stretch deep in search of water.

The tradition with growing indigenous grape varieties in a classic and historic wine production area of Friuli is combined with trying ‘new’ methods of viticulture and winemaking. Then, of course, these methods are not really new but a recuperation and continuance of older farming techniques and theories.

Here, I am thinking of a focus on biodiversity and organic and biodynamic farming methods. New in the sense that they are dynamic and trying different methods and techniques to see what works best.

Aquila del Torre is organically certified since 2013 and since 2015 they also use certain biodynamic farming methods to improve the fertility of the soil.

Did you know that they also experiment with using draught horses in the vineyard?

If you have read my previous articles about Roberto di Filippo at the Di Filippo in Umbria, perhaps you remember that the use of draught horses is a step towards becoming more sustainable. (See A New Face of the Sagrantino di Montefalco.) Of course, it is also very hard work.

At Aquila del Torre they do not keep and train horses themselves, rather they are a part of a local farming business network called Attractive. A horse stable that is part of the Attractive network keeps and train the horses that are then used for agriculture work a couple of times a year at different farms (such as a horticulture farm) that are members of the Attractive network. This is a smart solution to not have to take on all the work and the costs in relation to keeping draught horses and training them.

At Aquila del Torre they are part of important networks such as Attractive and Viticoltura Vivente, the latter one focusing on developing the use of biodynamic methods. Aquila del Torre is testing and using composting, cover crops, draught horses, and much more… In the wine cellar, they now only use big oak barrels and cement tanks (they also have cement eggs) for the maturation of the must.

For this month’s theme in the ItalianFWT, I will talk about Picolit and Refosco dal peduncolo rosso. The expression of these two grapes in two wines from Aquila del Torre winery.

Let us start with Picolit where I will not, as you probably thought, talk about the so well-known noble rot passito wine. Rather, I will focus on a dry white wine produced by Aquila del Torre winery with this noble grape. They produce the white wine Oasi Bianco with Picolit, thus not only the Picolit sweet wine.

Picolit is the noblest of grapes according to many wine experts and it has its home right in the Colli Orientali area. Picolit is considered to be one of the oldest Italian grape varieties with a documented history dating to the XII century. It can also be said to be a true noble wine that was a favourite at many royal courts in Europe in the past.

In the Oasi Bianco 2016, Picolit finds yet another fascinating and ‘noble’ expression. It is a mineral and a bit chalky dry white wine that is very complex. You can feel notes of raisins at the beginning followed by candied fruit, notes of white flowers, aniseed, herbs, honey. A fresh and smooth wine.

Refosco is a grape variety native to Friuli Venezia Giulia and it also grows in Veneto. In the 19th century, there was a distinction made between the Refosco dal peduncolo rosso and the other types of Refosco. What is characteristic about Refosco dal peduncolo rosso is that it ripens a couple of weeks earlier and that its stalk becomes reddish in colour when the grapes are ripe.

Recent research has shown that Refosco dal peduncolo rosso is related to Teroldego and Lagrein, as well as to Corvina and Rondinella in Veneto. It is a grape variety that gives rise to wines of a certain complexity with, in general, fruity (cherry), floral, and herby notes.

Michele at Aquila del Torre winery told me that they strive to make elegant and smooth red wines and when it comes to their Refosco dal peduncolo rosso 2015, this is surely true. It is a wine where the spicy notes with pepper and clove are very much present but at the same time it is fruity and a bit herby.

I also felt a greener and woodsy undertone which I liked. It is said that when Refosco dal peduncolo rosso does not ripe to its full potential, the greener and more vegetal notes tend to dominate and that it is considered to lower the quality. However, I do not find the green and a bit woodsy notes to be disturbing but rather something positive. I can believe that these vegetal notes were very much stronger in 2014, that was a rainy year, but in 2015 it melts in well with the spicy and fruity notes.

A wine you should definitely try sometime.

Linda investigates “Alto Adige: Is this wine region Italian or Austrian?” at My Full Wine Glass

Gwendolyn is The Wine Predator, and she will be “Celebrating Summer in the Mountains of Italy : 4 wines with 4 courses from Südtirol”

Jeff at FoodWineClick! will be getting back to nature with “A Food-Friendly Skin-Fermented Vigneti delle Dolomiti”

Cindy will be taking a look at “Picolit – A Historic, Rare, Sweet Dessert Wine from Collio DOC” over at Grape Experiences

Lauren, The Swirling Dervish, will be trying out “Elena Walch Müller Thurgau with Summertime Shrimp Pad-Thai”

Katarina will be look closer at “Aquila del Torre winery: An Oasis in Friuli Focused on Local Identity and Innovation” at Grapevine Adventures

And Kevin will be doing a bit of a double-header at SnarkyWine, with some “Mountain Bubbles and a Tannic Finish”