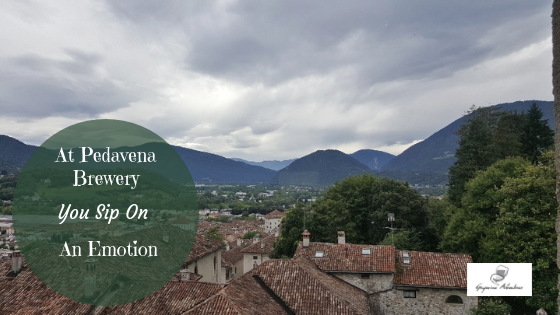 Pedavena beer, it’s like drinking an emotion. (I heard this sort of motto at Pedavena brewery last year, I cannot remember if said by the master brewer or someone else.)

The Pedavena brewery really does create emotion; with its long and tumultuous though fantastic history, its location that is stunning, the brewery’s capacity to be a part of the local community and to form a community.

Pedavena is being social in its truest sense.

I can testify to that after having spent a weekend with the Pedavena people last year in Pedavena, close to Feltre in Veneto. I have had this article on my mind for quite some time but as beer is not my speciality, I was not sure how to write it together. Finally, I managed to finish it though. Sorry for the delay…:-)

Pedavena is basically a district or locality next to, or in the periphery of Feltre, just at the foot of the Dolomites in northern Veneto. I am in reality not much of a mountain person in the sense I love the mountains, but I am not much of a hiker. LOL

When arriving in Feltre, I had one look at the mountains from the picturesque little centre and I instantly felt at home. Well, it also might have been because I across from the hotel immediately found my local bar called Bar Alpino with all the local characteristic people. I just loved it. I always try to find a neighbourhood bar to melt in a bit with the locals.

Anyway, I also went there to watch the World Cup matches in football (soccer) when we were not around sightseeing or drinking Pedavena beer.

We were a group of bloggers and influencers lead by Carlo Vischi who were invited by the Pedavena brewery for their annual Festa dell’Orzo (Barley Festival) weekend last year. Carlo had told me a couple of weeks earlier to be on call because he had something cool coming up…so I was prepared and ready to go. It turned into a fantastic weekend that was so much fun.

It was just a few weeks after the Midsummer weekend in Sweden, and it indeed felt a bit like a Swedish summer night when we went walking back to the hotel along the side of the road, in the dark, at the end of one of the festival evenings.

All in a line like a family of gees…joking…lead by Carlo Vischi. 😉

The weekend with Pedavena brewery was not only partying and having fun, but we also learnt a lot about the brewery and their beer. We had our own VIP access to talk to their Mastro Birraio (Master brewer) and other people working at the historical brewery.

Are you curious to learn more? Read on…

Pedavena – A Brewery by the foot of the Dolomites

Let us dive into the Pedavena brewery’s long history. It was in 1897 that three brothers – Luigi, Sante, and Giovanni Luciano – decided to pack up and move to Pedavena from Canale d’Agordo in the province of Belluno. Now, it is not that far away but at the end of the 19th century, it was surely an important distance to move.

They had taken the decision to build their new brewery in Pedavena because it was an area with abundant access to water of good quality; an important factor when setting up a brewery. It took more than a decade to get the production going and then soon after WWI hit followed by the interwar era.

Still, they managed to step by step develop the site and become the second largest brewery in Italy by 1920. In 1928, they even expanded by acquiring the Dreher brewery in Trieste.

Pedavena brewery was on a roll.

After WWII, there was a real boost in beer consumption as well as a boom of the economy in general. Pedavena brewery continued to expand and buy up new production sites in both northern and southern Italy during the following decades. In the late 1960s, the Pedavena brand name was put aside on a national level in favour of Dreher that would become the universal name of the group.

In 1974, the Dreher, ex Pedavena, Group was bought up by Heineken that made a lot of investments and technical developments during the first years.

The beer became more of an industrial product even though the Pedavena site was known for making high-quality products also under Heineken management. Then in 2004 came the sad announcement: Heineken had decided to shut down the Pedavena site and definitely closed it in September 2005.

The people working at Pedavena and the local community had no intention of accepting this, they loved their local brewery and started a mass mobilization on a grassroots level. They made petitions and collected signatures also with the help of digital media and web marketing strategies. They had the support of the local administration and governmental bodies. Everybody worked together with the aim of saving Pedavena brewery.

The result was that the Castello Group (a brewery group from Friuli) decided to go ahead and acquire Pedavena brewery in January 2006 to then reopen the doors just a few months later.

Today, it has reclaimed its position as one of the main breweries in Italy. In fact, Pedavena has created its own local community with a park surrounding the brewery site where they organize concerts and other happenings, a pub that has now become an important gathering place for locals and tourists. However, Pedavena stretches so much further than this having Fabbrica di Pedavena pubs all over Italy where you can enjoy Pedavena beers and their atmosphere.

Since 2007 you can also get a guided tour of the brewery and visit the museum they have set up. There is a cool Pedavena beer shop – La Bottega Dolomitica – where you at the end of the guided tour can pop in for a beer, have lunch, or just buy a couple of bottles of Pedavena beer. (For more about the history of Pedavena, see Andrea Casadei, Slideshare presentation here)

What better place for Pedavena brewery to be than at the foot of the Dolomites that in 2009 became a UNESCO World Heritage Site…?

The weekend last year that I spent at the Barley Festival in Pedavena was an opportunity to learn more about the history of Pedavena brewery, their beer production, the local community, and much more.

We also got a guided tour of Feltre where my favourite was the visit to the theatre Teatro de la Sena (Teatro della Scena) that initially was used as a meeting room for the Great Council of the Republic of Venice. In the 17th century, it became a real theatre and in the 18th century, Carlo Goldoni had his debut with a couple of plays there.

Returning to Pedavena brewery, we got to taste their different beers every day and we also met with Dario, their master brewer, as I mentioned earlier. He is a young guy who started studying mechanical engineering in Padova but then decided to change direction and move to Germany for the master brewer program there.

His father used to work at Heineken so he had a good knowledge of the possibilities within the brewery world. Fresh out of the master brewer program in 2017 he was immediately hired by Pedavena and is today leading the beer production there.

Dario told us that he believes in quality which means it is important to have good raw material. He also believes in satisfying the loyal clients by keeping the consistency of the historical beer products. At the same time, he is not afraid of innovation and trying new things.

Pedavena brewery does indeed foster the development of their trusted and loyal ‘beer’ community and rewards this loyalty by pampering and treating their fans and customers with utmost care. During the weekend in Pedavena, you did really feel like part of a community. A community where they show you their love and appreciation for being a part of their ‘beer’ world.

They have different beer lines such as the Birra Dolomiti, Birra Pedavena, and Birra Superior. Then they also have some other beers such as Centenario (Centennial) that was created to celebrate the 100th anniversary of the brewery in 1997. It is a non-filtered and non-pasteurized beer with floral notes and a bitter aftertaste. I enjoyed this beer very much.

Another Pedavena beer I liked a lot was the Birra Dolomiti Speciale that we also tasted at the Slowfood seminar paired with food. It is a refreshing beer with fruity notes and a touch of caramelized malt. At the Slowfood seminar, it was paired with a cream of beans, quail eggs, and chives. Read more about the different beers at Pedavena’s website here.

Jazzing it up with Pedavena

My summer adventure with Pedavena did not finish here last year. Together with Sara and Simone from Hidden Italy, we were invited some weeks after for an evening with the Pedavena people at Umbria Jazz in Perugia. Pedavena is one of the official sponsors of Umbria Jazz since last year (if I am not mistaken).

We had the pleasure of enjoying Umbria Jazz together with people from the Pedavena management and marketing team. And the icing on the cake was to having front row seats to the concert with Pat Metheny – sipping on Pedavena beer during the concert.

Pedavena brewery and its beers…

…can be seen as a bit of an institution in Italy with its long and interesting history linked to Pedavena in Veneto. It is true that it is a big brewery under the Castello Group but this does not mean that they are not very focused on detail, quality, and innovation.

Pedavena brewery is very linked to the local community but they are also expanding all over Italy with their beer culture. They are also exporting even if that is probably a part of the company that can be further developed.

Have you tried any Pedavena beer?