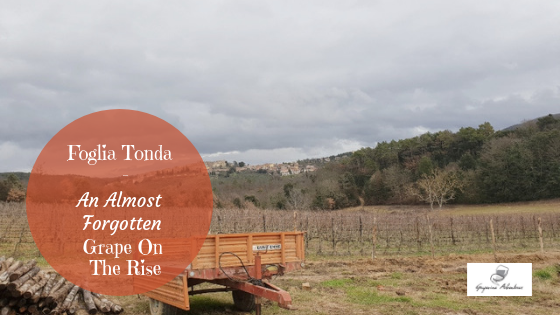 When the semifinal in the Women’s Soccer World Cup between Sweden and Holland was in full swing yesterday, I was on edge almost as if sitting on needles.

Football, or soccer, has always been serious business in my family. I played for several years in Sweden and before Wine entered my orbit, football was a big part of my world.

When you are used to reading the play and the possible strategies, as an ex-midfielder, it is hard to watch on the couch at home. Often you see the possibilities that the players in the ‘heat’ of the game might miss.

Women’s soccer has a long tradition in Sweden and the national team is considered as strong internationally even if it sometimes tends to be a bit forgotten next to other perhaps more colourful teams.

While almost biting my fingernails, I wanted to ‘cool’ down a bit in half-time by starting to write on a wine article. I decided to focus on the Foglia Tonda grape that is a traditional grape variety to Tuscany with a long history – just as women’s soccer in Sweden – but that for some time was then a bit forgotten.

A bit far-fetched comparison I know, but you get the picture, right?

Why talking about the Foglia Tonda, then?

Well, it is an article I have had in mind to write for quite some time.

In early February, I went to the first forum organized to focus on the Foglia Tonda grape at Fattoria del Colle in Val d’Orcia. One of the promoters of this forum was Donatella Cinelli Colombini, who in 2000 grafted 400 scions of Foglia Tonda on existing plants in their vineyard named Boschetto.

The results were very positive even though this grape variety has a very vigorous yield but is slow to ripen, and from 2001 they produce the by now well-known wine Cenerentola. This wine is a blend of Foglia Tonda and Sangiovese produced within the appellation Doc Orcia.

Foglia Tonda is said to have been grown in the southern parts of Tuscany since ancient times but it was mentioned in a written context first in the late 19th century in the “Saggio per una ampelografia universale” by Di Rovasenda where it was referred to being cultivated in the vineyards of Castello di Brolio. In the 1960s, it was said to be grown mainly in the Chianti Classico area.

More recently, the project Senarum Vinea that was designed by the University of Siena in collaboration with the Cittá del Vino association, Foglia Tonda was defined as one of the historical grape varieties within the walls of Siena. Basically, it was a project that went from 2007 to 2012 where they carried out research on old and often forgotten grape varieties native to Tuscany, that are a part of the viticultural heritage.

Since 1970, Foglia Tonda is registered as a grape in the Italian National Registry of Grapevine Varieties and Clones. Further on, in 1978 the University of Florence also issued a type-approval for this grape variety.

Why is it called Foglia Tonda then?

As you perhaps have already guessed because it has a round leaf that is similar to the shape of a small frying pan. It is a grape variety with a vigorous production even though some say it would be more correct to say an irregular yield.

It is, furthermore, a grape that is fairly resistant to both downy and powdery mildew and botrytis. The thing is that it is a lesser-known grape that has not been researched very much and there is very little data about it so far.

Regarding the yield and suitable training system, Ian D’Agatha mentions that some prefer Guyot while others, such as Cinelli Colombini, have chosen the spur cordon variant as they consider it to heighten the quality of the grapes thanks to the lower productivity of this training system. (see Ian D’Agatha, Native Wine Grapes of Italy, pp. 289-291.)

Foglia Tonda is considered to be a grape with a huge hidden potential both to make monovarietal wines as well as in blends. It gives fine wines with a certain body and characteristic floral, fruity, and spicy notes such as of violet, often ripe red fruit, dried plums, cinnamon, etc. In comparison to Sangiovese, it is, in general, a wine with a more subdued acidity and a bit softer tannins that might make it less prone for ageing.

Reflections on the future of Foglia Tonda

Perhaps ‘future’ is not the right word here but rather I wanted to mention some thoughts about possible developments of this grape that were discussed at the Foglia Tonda Forum.

The journalist Gianni Fabrizi who was leading the debate stressed that Foglia Tonda can perhaps become a grape variety for wineries in, so far, lesser-known areas to stand out. In areas where it might be more difficult to make one’s voice heard with Sangiovese wines in relation to more dominant Sangiovese appellations, such as Brunello di Montalcino or Chianti Classico.

Gianni Fabrizi, furthermore, underlined that it is not likely that many producers in Montalcino, Montepulciano, or in the Chianti Classico area will focus on Foglia Tonda. However, in territories such as Val d’Orcia, Grosseto, and Valdarno it can make sense to start to focus on monovarietal Foglia Tonda wines or blends.

I agree with this reflection even though I still think that Sangiovese will continue to be a key grape variety also in the smaller appellations in Tuscany. However, Foglia Tonda can probably be a way to go to create a unique niche that can be linked to Tuscan history and to the viticultural heritage.

Some I talked to at the event thought Foglia Tonda seemed best in a blend with other grape varieties while others liked it as a monovarietal. I cannot say I lean in one direction or the other so far, I would need to taste more wines made with Foglia Tonda and more vintages to give an opinion on this.

Donatella Cinelli Colombini drew the attention to the importance of collaboration, to share experiences, ups and downs, and challenges as the only way to move forward together. She strongly believes that the cultivation of Foglia Tonda is an important heritage and a treasure to safeguard.

Let us hope that the Foglia Tonda Forum can become a yearly event where Foglia Tonda can be put in the spotlight and gain the attention it deserves.

9 Foglia Tonda Producers at the Forum

There were 9 producers from different areas all over Tuscany that participated in the Foglia Tonda Forum. We tasted both monovarietal wines and blends made with Foglia Tonda from these producers. The producers were as follows:

During the tasting, I found all the wines very interesting and it was very educational to be able to taste Foglia Tonda wines from so many different areas in Tuscany. Here I will only mention a couple of them, from three different areas.

This a biodynamic winery that is Demeter certified and they declare themselves as a producer of natural wines. On the website, they clearly state that they do not add anything, nor do they take anything away from the wine.

The juice undergoes a wild fermentation and is then transferred to cement tanks. Thereafter, it is matured in terracotta amphoras and in tonneaux of French oak. It is a fresh and mineral wine with notes of dark fruit and spices. I also felt the presence of earthy notes and a touch of green, shrub herby notes, like walking through a forest.

This is a winery with about 35 ha of vineyard where they also focus on some lesser-known Tuscan grape varieties such as Foglia Tonda and Pugnitello. They are not organic but in a low impact regime.

Poggio al Tempo is macerated on the skins for 10 days and then the juice is matured for 1 year in cement tanks and then settles in the bottle for 1 year. It is a fresh wine with clean notes of fruit, such as plum, but also more red fruit, violet, spices. It has a sweetness that probably comes from the fruit. A light herby and green side is also perceivable.

Podere Il Castellaccio is located on the Tuscan coast in the Maremma area close to Castagneto Carducci. The estate does not only comprise of vineyard lots but also olive groves, forest, and a part of the land is also destined to horse breeding. When it comes to viticulture, they focus on the growing of Sangiovese, Foglia Tonda, Ciliegiolo, and Pugnitello.

Valénte is a wine where each grape is fermented separately in oak casks and the maceration on the skins lasts for about two weeks. The juice then continues to mature in oak casks for 1 year and in the bottle for 1 year. It is a wine where you feel the closeness to the sea and the Mediterranean flora. It has notes of sour cherry and other fruit, spices, such as a clear note of vanilla. The balsamic touch also comes forth clearly. A smooth and persistent wine with a good body.

was, in my opinion, indeed a great success as it was to the point, concise, and offered a good overview of wine producers from different parts of Tuscany. Let us hope they will continue this forum.

Oh, and we lost the semi-final to the Netherlands…but to be on the bright side, the Swedish female soccer team played very well. And as they say, you wine a bronze but loose a silver. So let’s hope we will win a bronze medal then! 🙂