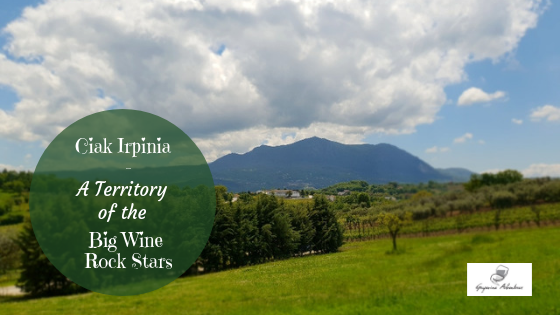 Since quite some time, I have been intrigued by the wines from Irpinia in Campania. However, I was not that familiar with the area, I must admit, as I had only been there for a quick visit some years ago. This year, in just a few months I have gotten a full immersion into the Irpinia district and its lovely wines.

Can you imagine that I have been there three times in 3 months so far this year?

In this article, I will tell you more about my visit in mid-May to the Ciak Irpinia event that is organized by the Consorzio Tutela Vini d’Irpinia as a sort of preview of the newly released vintages. This was the third year of Ciak Irpinia, so it is a fairly new initiative but nonetheless important and dynamic.

In fact, Stefano di Marzo, the President of the Consorzio Tutela Vini d’Irpinia, told me that they want to grow the event step by step and try to become an affirmed yearly occurrence to count on. The idea is to increase the visibility of the Irpinia territory and its wine production both nationally and internationally.

Thanks to Milena Pepe, the owner of Tenuta Cavalier Pepe, I got an invitation to Ciak Irpinia. In that way, I could immerse myself in Irpinia for almost 3 days and get to know the producers and their wines so much better.

On the second day, I got a tour of three different wineries together with some fellow journalists. It was almost one of the few days of sun in May – that in Italy went by the nickname Mayember due to the rain pouring down incessantly – that made it into a lovely day that also allowed us to go for a walk in the vineyards. The wineries we visited were Cantine di Marzo, Tenuta Cavalier Pepe, and Antonio Caggiano winery.

The wines of Irpinia

Irpinia is the land of great wines such as Fiano di Avellino DOCG, Greco di Tufo DOCG, and Taurasi DOCG. These are wines that stand strong and proudly represent Irpinia and the Campania region, even if they still are a bit in the shadow compared to wines from other Italian regions. However, Fiano di Avellino DOCG and Greco di Tufo DOCG are appellations that can be considered as rising stars during the last decades.

Taurasi DOCG is a fabulous red wine made with Aglianico grapes that is often still overlooked, in my opinion, but with enormous potential. It does not help the image of a great southern Italian wine to still often being referred to as the ‘Barolo of the South.’ I find such nicknames quite stigmatized and would rather see that it gets the label that it deserves, as an important flagship red wine of southern Italy.

Let us take a quick look at the three grape varieties below.

Fiano is considered one of Italy’s great white grapes for its versatility, as it can give rise to many different kinds of wines such as light as well as more full-bodied wines, young and pleasant wines to more aged wines.

It is, furthermore, a very old grape variety in Italy that can be traced to the Roman era and the writings of Pliny, or even as far back as to the Greeks B.C. A more solid mention of a Fiano wine dates to the early Middle Ages and a document of Frederick II, the Holy Roman Emperor. According to Ian D’Agatha, Fiano is native to the Lapia area, close to Avellino in Campania.

An interesting tidbit is that Fiano up until the 1970s had been a bit forgotten as a grape variety. It was Antonio Mastroberardino who was one of the few who produced it since the 1940s and that tried to put it back on the wine map. The turn would come in the 1980s, leading to the fame it has reached today.

Greco is a grape variety that has often erroneously been confused with Greco Bianco. However, Greco is a grape cultivated mainly in Campania while Greco Bianco is native to Calabria. Greco is considered to be a difficult grape to grow due to its generally low yield and sensitivity to diseases. It was often abandoned by vine growers in the past in favour of more productive and easier grapes.

Greco di Tufo is another of Italy’s great white wines that is more structured and has a higher alcohol level than a Fiano wine. In the volcanic soil on the high hills around Tufo in Campania, the wines are mineral and elegant. The soil is of clay and limestone containing also sulfur and chalk. The soil changes a bit in other lower areas of Irpinia where the Greco grape is grown.

In fact, if we take the example of Cantine di Marzo, a winery that was founded in the mid-17th century by Scipione di Marzo, they discovered that the soil around Tufo was particularly rich in sulfur and set up a sulfur mining industry in the 19th century. It was in this context, that the method of ‘zolfatura‘ i.e. to use sulfur to protect the vines against external diseases was discovered in Irpinia.

Aglianico is indeed considered to be one of the amazing red grapes of Italy next to Sangiovese and Nebbiolo. Just as the Fiano, also Aglianico can show diversity as it can produce many different kinds of wines ranging from light-bodied, fruity, and aromatic to more rich and full-bodied wines with long ageing potential.

Some scientists believe that Aglianico stems from the Greek settlements in southern Italy around the 8th century B.C., others that it is a grape that was grown during the Roman era, while more recent research stresses that it is a more recent grape having its source in locally found wildly grown grapes. Whatever its origin it is today a very important red grape in southern Italy. Taurasi, Taburno, and del Vulture are three biotypes that represent Aglianico. In this case, we are focusing on the Taurasi biotype.

When we visited the Tenuta Cavalier Pepe winery we got a close up look at their older Aglianico vineyards with the traditional training system called ‘tendoni’ (marquees). It is a training system that provides shade against the sun and weather and wind at the same time as the farmers in the past could grow other crops in the soil under these Aglianico vines. The agronomist at
Tenuta Cavalier Pepe told us that these ‘tendoni’ has a lower yield and that they today mainly use guyot as a training system as it is much easier to handle.

Let us now move over to talk more about Ciak Irpinia…

As I mentioned before, this was the third time that the Ciak Irpinia event took place in Atripalda in the province of Avellino in Campania. It started out small and is growing year by year. Still, the consortium members do a great deal of the work themselves by pulling together the forces.

This year’s event was held at the Dogana dei Grani (old grain warehouse) in the center of Atripalda with the support of the Atripalda town council, the Province of Avellino, and the Gal Irpinia-Sannio (Gal is a sort of local consortium, or action group, that favours rural development supported by EU funding).

During Saturday, May 18th, the journalists had a blind tasting in the morning to be able to get a feel for the vintages 2018 (white wines) and 2015 (Taurasi wines) in a more objective way.

A special committee had done a first screening and selection process to arrive at a feasible number of wines to taste for us journalists. We were tasting Falanghina, Fiano, Greco, and Taurasi wines.

At the presentation in the afternoon, Stefano di Marzo, Milena Pepe, the mayor of Atripalda, the president of the regional commission for agriculture, and the president of the local GAL held the press conference and talked more in-depth about the event and their vision for the future of the Irpinia wine territory.

Stefano di Marzo mentioned that the Consortium of Irpinia has about 530 members and represents about 80% of the wine production in the area. He further stressed that their aim is to increase the visibility of Irpinia and its wines and strengthen the sense of community between the consortium members as well as in relation to the world at large.

Di Marzo then gave the floor to Milena Pepe, owner of Tenuta Cavalier Pepe, former president of Consorzio Tutela Vini d’Irpinia, an important force and woman in wine of Irpinia, who among other things talked about the importance of strategy as well as synergy between the different operators involved to further develop Ciak Irpinia.

This was followed by a talk on the weather conditions for the vintages 2018 and 2015 by Luigi Moio who is a professor of oenology at the University of Naples Federico II.

The ripening process was quite regular in 2018 leading to a harvest of the white grapes in early October and of the Aglianico grapes during November. It was a good year for the white grapes leading to fresh wines with an intense and elegant bouquet. In 2015, the grapes ripened a bit earlier paving way for Aglianico wines of elevated quality with rich notes of red fruit, almost with a touch a dark fruit jam.

Regarding the wines tasted at Ciak Irpinia…

…I found the 2018 white wines to be of overall constant quality and also the 2015 Taurasi wines were of good quality with some minor ups and downs. I found the oak to be too predominant still in some of the Taurasi wines while others showed great promise for the future.

I will not go deeper into each wine category here but rather only mention some of the wineries that I liked. The wineries are not exhaustive and listed in random order.