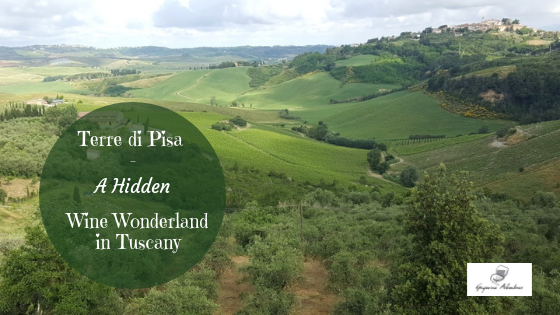 There is a whole wonderful world to discover when it comes to wine in the Terre di Pisa area. For many of you, it might still be a fairly unknown area. For me, it is a territory very dear to me after having gotten to know several of the wineries there during the last few years. I do admit that it was a beautiful discovery for me too…

Only recently, I got to hang out with the Terre di Pisa gang at a dinner during Vinitaly. Together with two friends from the UK, we were searching for a restaurant when I literally ran into Laura Leone of Castelvecchio winery. She immediately invited us to join them for dinner. How nice was that…?

This only shows how friendly and hospitable they all are. Below, I will spin on this when talking about some ‘first’ experiences…

There are indeed a couple of ‘firsts’ in this article, so to say, to show how the Pisa wine area is both close to my heart and an up-and-coming wine area. 😉 Let’s get down to my first ‘wine-first’…

During the last few years, I have gotten to know several other wineries in the area such as Sangervasio, Castelvecchio, Badia di Morrona, Fattoria Uccelliera, Podere La Chiesa, Le Palaie to just name a few. There are indeed so many wineries in this area that make fantastic wines. So, let me shine some light on the Terre di Pisa wine area here.

There is yet another ‘first’ in this article when talking about Terre di Pisa. Last year, in 2018, the Consortium Terre di Pisa was instituted and, therefore, they organized a first press tour and wine tasting event in collaboration with the Chambers of Commerce in Pisa.

I had the pleasure of being invited to this ‘first’ inaugural press tour and tasting. It was two intense days where we had lots of fun while learning about the Terre di Pisa wine area and visiting several wineries. At this very first Terre di Pisa event there were many wineries in the area involved. However, officially it seems that only the following wineries are a part of the consortium so far:

The DOC appellation Terre di Pisa was instituted already in 2011 even though the consortium was set up only in 2018. Terre di Pisa DOC wines can be produced in a set of communes in the province of Pisa such as Pontedera, Peccioli, Terricciola to name a few.

Terre di Pisa Rosso can be made with a minimum of 70% of any of the grape varieties Sangiovese, Cabernet Sauvignon, Merlot, and Syrah as a single grape or as a blend. It can furthermore contain a maximum of 30% of other red grape varieties that are local to the area in question.

Terre di Pisa Sangiovese needs to contain a minimum of 95% Sangiovese and a maximum of 5% of other local red grape varieties in Tuscany. For the maturation, see above. Both typologies are wines that give an expression of the local territory, i.e. Terre di Pisa.

The province of Pisa is so much more than the leaning tower in Pisa. Terre di Pisa embraces an area where vine growing and wine production dates to the Etruscan era.

If we look more to the soil and the terroir, it is an area that is a beautiful mix of hills, forests, fields, and olive groves. Up until a couple of million years ago, this area was the bottom of the sea. Thus, the soil that mainly consists of sand and silt along the coast and clay and limestone towards the inland, is also rich on fossil shells. This gives complexity and structure as well as minerality to the wines.

Minerality is a complex topic though, recent research has discussed the concept of minerality stressing that the perceived minerality in wine has no link to the soil. Rather, it has been argued by some that minerality is connected to the synthesis of the plant, to the vine and the farming conditions (according to Professor Attilio Scienza) or by others that the perception of minerality is linked to cultural factors.

Either way, the soil rich on fossil shells can be considered to have an influence on the body and complexity of the wines in general.

Last year, we had a lovely though intense day with touring five or six different wineries in one day followed by a welcome dinner at the agritourism Podere Marcampo in Volterra.

Here, I will not go in and talk more in-depth about every single winery we visited because there is not enough time or space for that. I will, however, tell you which wineries I visited during that day in early June last year. We started out in the morning at Fattoria Uccelliera and then continued to Badia di Morrona, Pakravan Papi, La Regola, Castello Ginori di Querceto, and Caiarossa.

Earlier I was mentioning Laura Leone, she also made me feel at home during Terre di Pisa last year at their winery and agritourism Castelvecchio. It was a quiet and perfectly relaxing place to stay after a long day in vineyards and at wineries followed by a yummy dinner. The apartments are furnished in a cool and minimalist 70s style that combined with the amazing view of the surrounding Tuscan landscape makes it into a perfect holiday place.

This is a winery located in Terricciola that has been in the Pantani family since the mid-20th century, though it was only in 2002 that they decided to take up the wine production again. Further on, I will tell you more about this winery in a separate article.

Terre di Pisa – A Wine Area on the Move

Terre di Pisa is, as I have tried to show, an area that is on the rise. It is a wine area where vine growing and wine production have always been at the core but perhaps it is only more recently that it is starting to get the recognition it deserves. The consortium is very young still but they are working hard on marketing their territory and wines.

Therefore, when the ‘second’ Terre di Pisa event is coming up soon, it seemed like the right moment to put this consortium and its wineries in the limelight. I will, unfortunately, not be there this year, because I am leaving soon for Puglia. However, I am sure I will visit a couple of more Terre di Pisa wineries very soon. So look out for more articles about this wine area.

Anyway, I hope you have gotten a general idea of the Terre di Pisa wine district here and that you are as curious as me to learn more. And if you have the chance, try and find a wine from a Terre di Pisa winery and write me a comment below.