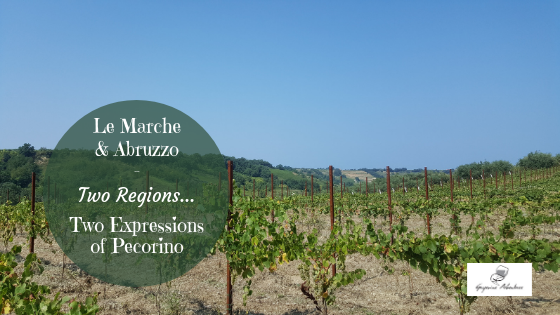 Pecorino has indeed been one of those white grape varieties that I have always liked even though it until more recently was never considered much as a white wine. Or perhaps it was not even as well known even in Italy. I used to go often to Le Marche and a white Pecorino wine was always a favorite wine with seafood dishes after a warm day on the beach.

When it was now time to turn our focus on the Pecorino grape in mainly Le Marche and Abruzzo in the Italian Food, Wine, and Travel group, I decided to take the opportunity to shine some light on two producers; one from Le Marche and one from Abruzzo.

Let me reveal who I am talking about.

First out is a producer I got to know back in 2016 in Bolzano at the wine event Autoctona where he was presenting his wines made with native grapes. I immediately liked his wines and was curious about this young producer that was still working on making a name for himself. Since then I have written about him in an article or two and he has been a guest at my live stream.

I am talking about Marco Santori of Tenuta Santori in Ripatransone in Le Marche.

The second producer I will look closer at here had a completely different career before as a researcher in economics I believe in Milan but then decided to change path in life and return to Abruzzo to produce wine. It is a family project and they have so-called ‘satellite’ vineyards also in Piemonte and in Tuscany, even though the main activity is close to Ortona in Abruzzo.

I am talking about Roberto Dragani of The Vinum winery that he runs in Abruzzo together with his wife Natalia. I visited them last year when I was spending a couple of days in Termoli in Molise. His father found me on Twitter where he saw I was close by and asked me to come for a visit.

Below, I will soon shed some more light on these two producers.

The theme this month, May 2019, will be Searching Le Marche, Abruzzo and the World for Pecorino in the Italian Food, Wine, and Travel (#ItalianFWT) group. As briefly mentioned above, I will be focusing on two different Pecorino producers: Tenuta Santori in Le Marche and The Vinum in Abruzzo. This will be a way also to show two wine producers of the same grape variety but in two different regions.

On Saturday, May 4 you can join us on Twitter at 11amEDT / 17.00 CEST to learn more about food, wine, and travel in relation to Pecorino wines. Just type in the hashtag #ItalianFWT in the search field and click Enter, thereafter, you click Latest which will show you all the live tweets.

Pecorino, the grape, not the cheese

Pecorino is a grape variety native to mainly Le Marche and Abruzzo, but it can be found also in Lazio, Umbria, and Tuscany. Many of my fellow writers here in the #ItalianFWT group are writing about the history of the Pecorino grape that was ‘re-discovered’ in the 1980s, so I am not going to go too much into that here.

Just to do a recap, Pecorino is a grape variety that used to be cultivated in Le Marche and Abruzzo but then it was a bit put aside and forgotten in favor of other grape varieties in the 20th century. Pecorino does have a rather low yield and, therefore, it suffered in comparison to other more productive varieties. However, it is a grape that gives wines with good acidity and a good structure.

The name Pecorino seems to refer mainly to the fact that it was cultivated in areas of pastoralism in the southern parts of Le Marche. It has been said that the sheep (and also the shepherds) liked to eat these grapes during the transhumance, i.e. the nomadic seasonal movement of livestock.

As I mentioned above, I got to know Marco of Tenuta Santori a couple of years ago and has since then followed his development and path towards success. (For those of you who understands Italian, here is a video from an event last year with Marco) Marco dreamed about becoming a winemaker already as a little boy when he accompanied his grandfather in the vineyards. Today, he has made that dream come true with Tenuta Santori that is an organic winery comprising about 15 hectares of vineyard.

Marco is slowly but steadily carving out his own place in the wine world with his wines produced in Le Marche. In 2016, he presented his wines at Autochtona, he was then that same year awarded Tre Bicchieri by Gambero Rosso for the first time and has also entered the Slow Wine guide. Things are looking up for Marco.

Tenuta Santori is located on the Colli Piceni which is an area with a unique terroir in the southern part of Le Marche, very close to the border towards Abruzzo. I say unique because, as Marco told me, within a radius of 40 km you go from mountains of up to 2000 meters to hills and seaside.

The vineyards in this area are thus surrounded by a unique microclimate where they benefit from the sea breeze during the day and the winds blowing in from the mountains during the night. (Read more about Marco and Tenuta Santori in my article Tenuta Santori – Winemaking With Esoteric Varieties in Le Marche)

Let us talk more about Tenuta Santori’s Offida Pecorino DOCG wine. I have tasted the vintages 2015 and 2016 though not the 2017. It is a monovarietal Pecorino that is matured only in steel vats. It is a mineral, fresh, and savory white wine where you can clearly feel the presence of the sea. It is a structured wine with generally a complex bouquet of both citrus fruits and other fruit, such as peach. It also has a green and herby undertone.

As you might have understood by now, I am a fan of Marco Santori’s wines. LOL

The Vinum – A Winery with an International Touch

While I was enjoying a bit of beach time in Termoli last summer before I continued down to Puglia for winery visits, I got a tweet from The Vinum winery. It was Tommaso, the father of Roberto Dragani, who asked if I wanted to come and visit The Vinum the next day in Ortona. From Termoli it is less than an hours train ride.

The following day, I hoped on a train towards Ortona and had a fun day with Roberto and his Russian wife Natalia. It was a very warm day, but we walked through most of their vineyard lots anyway. After that, I was in dire need of wine. LOL

The Vinum is an organic winery with its base in Abruzzo where they cultivate Pecorino, Cococciola, Montepulciano, and a bit of Pinot Grigio and Cabernet Sauvignon. They also have vineyards in Piemonte and Tuscany that are organic. They collaborate with other wineries there for the winemaking processes. Several of their wines have been awarded high scores by James Suckling and the Guida Oro Veronelli.

Focusing more on the Pecorino here, Roberto told me that the training system they use is the pergola abruzzese while the training system for the Pecorino vines at Tenuta Santori is guyot. The soil in the Pecorino vineyard of The Vinum is mainly clay while it in the Tenuta Santori vineyard is more calcareous. We were talking about the microclimate in the southern parts of Le Marche above, and close to Ortona in Abruzzo they are very close to the sea while the inland is dominated by hills. Just as in Le Marche they have a sea breeze blowing in while they do not have the higher mountains as close.

The Pecorino Colline Pescaresi IGT from The Vinum is a fresh and mineral wine with a salty touch. The notes are more floral, such as acacia and other shrub herbs and fruity, mainly citrus fruits and lemon. There is also a sweeter, honey-like touch to this wine. I tasted the 2017 vintage when I was there, I believe. Just as Tenuta Santori’s Pecorino wine, this one is also matured in steel vats only.

This wine was also a favorite of mine after a hot day around the vineyards.

The two Pecorino wines are produced in two different regions – Le Marche and Abruzzo – that are very close geographically to each other. They are two wines that are both similar and different at the same time.

Both wineries are organically certified but the microclimate in the two regions is a bit different.

Both wineries are located close to the seaside which gives the wines that lovely salty touch of sea feeling.

Both wines have a good acidity with notes of citrus fruits and shrub herbs while The Vinum’s Pecorino Colline Pescaresi IGT is a bit more floral than Tenuta Santori’s Offida Pecorino DOCG wine.

The difference is that the Tenuta Santori’s Offida Pecorino DOCG wine has more structure, body, and a bit more elegance. The Vinum’s Pecorino Colline Pescaresi is an IGT wine and the regulation probably allows a higher yield and has fewer restrictions. Still, it is a Pecorino wine with its distinct lovely character.