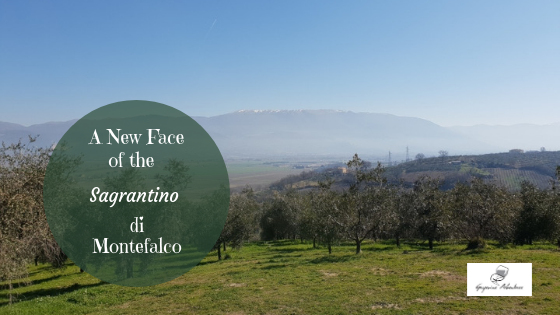 So, let’s get back to talk about Montefalco in Umbria and more precisely the Anteprima Sagrantino days that I attended back in February. It was an event sponsored by the Consorzio Tutela Vini Montefalco. They made it possible to learn so much more about the Montefalco area and Sagrantino wines.

The small hilltop medieval town of Montefalco was a place that soon turned into a home away from home for me and I think for many of the other journalists. (Read more about Montefalco and Sagrantino wines in my articles A Biodynamic Expression of Sagrantino in Umbria and A Weekend Where Sagrantino Has Worked Its Magic) After just one day, I had ‘my’ coffee bar and the aperitivo place where I and Kelly often had a glass of bubbly after touring wineries, and before dinner time.

In general, the meeting point for everything was the main piazza. Walking down the street towards the Sant’Agostino cloister or the San Francesco museum and cloister it felt like walking in your own small hometown, saying hi to wine friends every second minute.

Montefalco turned into our own little village and I think that is when an event has become a success, right?

Let’s imagine that we start out this article early at dawn, going for a walk in the vineyard to learn more about organic and biodynamic farming.

Let’s imagine hearing the rooster crow while he is slowly waking up the surroundings. Just that we were already awake, hanging out with the draught horses of Roberto at Di Filippo winery in Cannara.

Let’s imagine me waking up before dawn to be in the vineyard doing live videos while Roberto is ploughing …hmm, not so easy, right?

For those of you who know me well, you know that the morning is not a good time of day for me. LOL It was all thanks to Kelly Mitchell – The Wine Siren – who went ahead and planned the whole visit at dawn to Di Filippo winery.

It really was a fun experience and it was even more fun seeing the expression on a fellow wine writer’s face when I sailed in at the hotel at 9 am all dressed, having a third coffee…before heading back to bed.

When I told my friends, I had been invited to the Anteprima Sagrantino many of them said like

oh, get prepared to taste lots of over tannic wines

oh, it is going to be hard to have to taste so many tannic Sagrantino wines at once

oh, you will have a tired palate after all those tannins

…and similar comments. I was thinking already then that I had not found the Sagrantino wines I have tasted during the last couple of years to be as invasively tannic as before. It might be that I have become more used to tasting Sagrantino wines, but I doubt it because I do not drink it that often.

When I sat listening to Filippo Antonelli, the President of the Consorzio Tutela Vini Montefalco (also the owner of Antonelli San Marco winery), at the inauguration talk, I actually got the answer to my questions.

We learned from Filippo Antonelli that the production of Sagrantino wines has undergone a lot of changes during the last 15 years. He stressed a couple of factors that have contributed to the change, such as

All in all, it has brought about a type of Sagrantino wines that are in no way as tannic as before, instead, they are more fruit-forward. (I will go further into this below, i.e. the question of the tannins.) The proof of this I believe to be the 2015 vintage that was presented at the Anteprima Sagrantino in Montefalco in February. It is true that 2015 was a warm year and in general, has given rise to wines with notes of ripe fruit and a certain body.

The Sagrantino 2015 I believe is overall a vintage with a beautiful fruit that is in no way negatively too sweet or overbearing but rather well balanced with the freshness and the tannins of the wine.

Both Roberto Di Filippo and Devis Romanelli told me that the trick is to do a good job with managing the tannins in the vineyard. According to them, it is not possible to adjust the tannins further on in the wine cellar. Devis told me that the Sagrantino, in reality, is the grape with the softest tannins if you find a balance in the vineyard. Sagrantino has many tannins, yes, but they are soft, not aggressive.
Roberto, furthermore, said:

“…often the tannins in the Sagrantino is a question of equilibrium. Sagrantino contains a lot of tannins but it also gives a great body to the wine. It is thus a matter of managing to keep these two in equilibrium.”

To sum it up, the comments of Roberto and Devis confirms what Filippo Antonelli said during his speech at the inauguration of the Anteprima Sagrantino. As we mentioned before, that the work in the vineyard has improved and that the Sagrantino producers today are better equipped to master the tannins into softer, fruit-forward, and fresher wines.

Many were the wines that I tasted during the days at the Anteprima Sagrantino in Montefalco in February, and here I will only mention a few wines that I liked. The wines I mention below are not limited to the 2015 vintage but overall a selection from the different vintages I got to taste.

During one of the Anteprima Sagrantino days, I got to visit the Romanelli winery just outside Montefalco. I had already visited this organic winery some years ago and I have been a fan of their wines for a long time.

We did a mini vertical tasting at the visit there in February, that also included the 2015 vintage. Their Medeo Montefalco Sagrantino DOCG 2015 is a monovarietal Sagrantino wine. It is very fresh with clean fruity notes that as it opens up becomes a bit sweeter. It has a balsamic undertone. The tannins are smooth, and less green than in the 2011 vintage. A Sagrantino wine to savour as a pick-me-up.

Valdangius is a small family run winery close to Montefalco. They have a history not only as vine growers but also as breeders of cattle for meat and cheese production. Today it is the siblings Danilo and Sandra who run the winery. The idea is to valorize their heritage, the local area, and its terroir.

The year 2014 is, in general, considered to have been a difficult year. This is true, but still there are gems to be found from this vintage. Fortunato Sagrantino Montefalco DOCG 2014 from Valdangius is an interesting fresh wine with lovely notes of red fruit, distinct green notes that then transition into a balsamic touch.

Fongoli winery is an organic and biodynamic winery in the locality San Marco, just outside Montefalco in Umbria. They are embracing biodynamic methods and are, since recently, also a member of the association Vin Natur.

Fongoli winery produces a so-called ‘normal’ Montefalco Sagrantino DOCG and a Sagrantino ‘naturale’ that is fermented 3 months in open ceramic jars, i.e. amphoras. This is their Fracanton
Montefalco Sagrantino DOCG Naturale where I tasted the vintages 2013, 2011, and 2009. The fermentation in amphora gives wines that are structured, complex, and with smooth and very elegant tannins. It is a wine where the bouquet and taste are in continuous development after you open it. I liked all of them but, especially, 2009 with its rich fruity notes, green and herby features, and a bit spicy touch. 2009 was their first vintage of this wine, therefore they do not have a historical memory so far of its aging potential.

Tenuta Bellafonte is a winery in Bevagna, not far from Montefalco. I just talked about the winery and their Trebbiano Spoletino wine in my previous article 3 Wines To Help You Celebrate Easter where you can read more.

They have a wine cellar that is partly built into the surrounding rocks which makes it easy to regulate the temperature in a natural way. They apply wild fermentation with indigenous yeasts and do not filtrate neither the Trebbiano Spoletino nor the Sagrantino wines. Here, I have chosen to talk about their Collenottolo Montefalco Sagrantino DOCG 2014. This so problematic vintage in many places all over Italy due to the rainy and cold summer, has in Collenottolo found a beautiful expression. The notes are indeed very green, herby, almost a bit ‘wet’ in the beginning but then a lovely fruit comes out. After a while, you get surprised by distinct notes of orange peel that makes this wine into a true gem.

After this focus on the new face of Sagrantino…

…the only thing to say is that you need to taste it yourself and see what you think. Then write me and let me know if you agree with me that Sagrantino wines are tannic and powerful, but at the same time smooth, fruity, and just lovely wines.