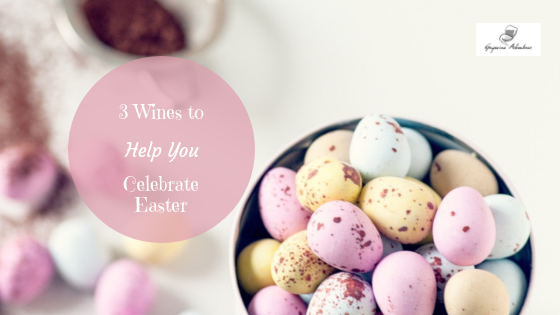 Easter is all around us. It has been some very busy months lately with a lot of traveling for wine and my article writing has been suffering. I apologize for that. I have so much to tell you, and I cannot wait to get a bit of calm to sit down and write about it.

Having so many stories to tell, so many wines to talk about, I would like to share some of my discoveries with you for Easter. Just as Christmas, Easter is a holiday when you share meals with family and friends where you can pair the meals with fine wines.

Easter for me is a bit like Christmas, it now seems like a holiday you enjoyed more as a child. I really do not celebrate it much anymore other than an Easter lunch or dinner. I remember that we back in Sweden when I was younger, used to have bouquets of Easter twigs decorated with colored feathers and eggs.

On Easter Thursday, the children then dress up as small witches that go door to door asking for candy. According to a medieval folklore imaginary, the witches ride off to Blåkulla on a broom on Easter Thursday to meet up with the devil. Now, I was not really a fan of this tradition as a child, but I did do it with friends from time to time.

The saddest day of Easter is, of course, Good Friday or ‘Long Friday’ as it is called in Sweden because it used to be one very long day contemplating the suffering of Jesus Christ. A day that is one of the more ‘serious’ holidays in Sweden. It is a day when until around the 1950s there was not even any broadcasting on national radio. Until recently, everything used to be closed. Today, I guess it has changed a bit as the secularization has moved forward.

I remember when I first arrived in Italy in the 1990s, that I could not believe that it was a completely normal working day in the Catholic country with a big C. Even if the church in Italy is separated from the state, it is a country entirely permeated by the religion and I could not get it. However, indeed, there is a difference in relation to a Lutheran country. 😉 With this, I do not want to say I am all that religious…

Now, I am not going to get too boring here…

Let’s get down to talk about food and wine. Easter food in Sweden is pretty much similar to the food you have at Christmas. A lot of different kinds of herring, salmon, eggs, lots of colored eggs, ham, the temptation of Jansson (a mix of sliced potatoes, anchovies, sliced onions, cream, and pepper that is cooked in the oven), meatballs, lamb steak, etc.

It is not easy to pair wine with this kind of food and, generally, Swedish people tend to, at least they did pair it with beer, soda, and vodka shots (snaps) rather than wine.

Anyway, as I do not make Swedish Easter food here any longer because nobody liked it much anyway, I will talk about three wines to enjoy during Easter time.

3 wines to enjoy at Easter

A sparkling rosé from Le Marche

The first wine is a sparkling wine from Le Marche made with the grape varieties Aleatico and Sangiovese. I tasted it already a couple of years ago and then again, the other week at Vinitaly. The winery I am talking about is Terracruda winery in Fratte Rosa on the hills in the province of Pesaro and Urbino.

I visited Terracruda winery in Le Marche about two years ago together with Angela Santarelli and Holly Ballard. Then I stopped by Terracruda’s stand the other week at Vinitaly to taste the new vintages with Maria Vittoria and her brother Luca Avenanti.

I think that Spumante Brut Rosato Terracruda is a fresh sparkling wine that pairs well with spring and Easter time. It has notes mainly of lovely red fruit such as wild strawberries and sour cherry combined with a slightly floral touch.

Then, if you find yourself traveling through Le Marche you should pay them a visit because they are located beautifully in the countryside. They are a dynamic winery with a young and fresh vibe, and they make several very interesting wines.

Did you know that they are the only ones making a white wine with Garofanata that is a native grape to Le Marche?

From Le Marche, we are now heading to Umbria. This is another region that has often been a bit in the shadow of Tuscany, but it is slowly gaining the place in the limelight that it deserves. In February, I attended the preview of the newly released Sagrantino vintage (l’Anteprima del Sagrantino) and I also got to taste some very interesting white wines.

I had read about Tenuta Bellafonte before and when I was invited to Umbria for the Sagrantino event I asked to be able to visit this winery as part of the press tour. On my last day of the Sagrantino press tour, I arrived at Tenuta Bellafonte and had fun being shown around by Maria Vittoria Servanzi. The estate is indeed a bit of an oasis tucked away in the nature close to Bevagna in Umbria.

The owner Peter Heilbron acquired the estate some 10 years ago and his idea is to make wines that are an expression of the local territory. They strive to be sustainable and have a balanced ecosystem. The vineyards are surrounded by forest and have a rich biodiversity. Furthermore, they also apply wild fermentation with indigenous yeasts in the winery.

During my visit to the winery, I also got to taste Arneto, their macerated Trebbiano Spoletino wine. After the cold fermentation for a couple of days, the wild fermentation then takes place in large casks of Slavonian oak. The juice is not filtrated before bottling. They want to maintain the specific character of the wine and the grape variety by keeping it as unaltered as possible.

We tasted both Arneto 2015 and 2016. I liked the 2015 a lot, even though it had more ripe notes of yellow fruit and a deeper character. However, I really liked the intense notes of both citrus fruits, more yellow fruits, and the floral, herby touch.

The 2016 was fresher and more mineral, its notes of fruit and herbs smoother. I guess the climatic conditions also play their part here, 2015 was a very warm year and thus it is a richer white wine with riper notes.

I believe the fresh and mineral side combined with the citrusy and fruity touch of both vintages can pair well even with more Scandinavian Easter food.

With the third wine, we are moving further south to Puglia. At Vinitaly, I got to know Marco Caiaffa via my other producer friend Marika Maggi from Cantina La Marchesa. We did a live stream all together at her stand where I got curious about passing by also Marco’s stand to learn more about his wines.

Tenuta Caiaffa is a winery in Cerignola that is close to Foggia in Puglia. Marco has taken over the management of the vineyards from his father and turned it into Caiaffa winery.

Marco is fascinated by biodiversity and especially by the role insects play in the ecosystem. He believes in synergistic farming where nature is respected, and the interventions are as few as possible. The idea of synergistic farming is to disturb the soil as little as possible and let the flora and the fauna work on their own. Marco here believes that the insects are fundamental to maintaining the balance in the vineyard.

Marco loves his insects so much that they are also the leitmotiv on several of the labels.

The wine I am going to talk about here is their wine Vibrans (the picture-winged fly) Puglia IGT that is a monovarietal Nero di Troia wine. Nero di Troia is a grape variety that I got hooked on a couple of years ago during a visit to Puglia. It is a grape variety that gives fresh and elegant wines that are an expression of the ‘other’ Puglia that so few still are aware of.

Nero di Troia wines are produced as monovarietal wines since the early 2000s while the grape variety in the past was mostly used as a blend in local DOC wines. Today, there are more and more wineries producing monovarietal Nero di Troia wines and they are showing the excellence of this grape native to the north-eastern part of Puglia, i.e. Daunia.

The juice ferments in contact with the skins for about 20 days and then matures in oak barrels for 1-1.5 years making it a smooth and elegant wine. It is a fresh wine with a delightful red fruit, slightly spicy, and a feeling of the Mediterranean flora and fauna that Marco told me about.

A wine that pairs perfectly with the spring and Easter time when nature is waking up and starting to blossom.

Hope you all have a Happy Easter!