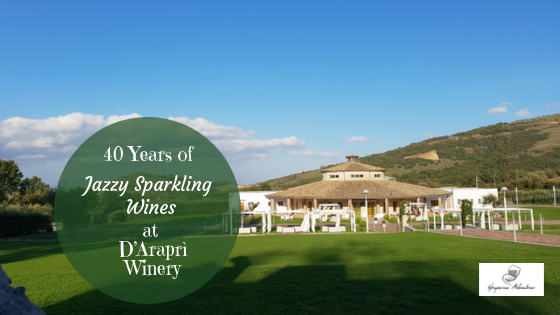 When I got invited by D’Araprì winery to their 40th-anniversary party I said yes straight away. Who wouldn’t accept on the spot, right? Even if it is a bit far to Puglia and just for a few days. Well, at least for me there was no doubt. Also, because the invitation came from my friends at D’Araprì winery in San Severo.

I feel very honoured to have gotten an invitation. I got to know them around 1.5 years ago when I visited their winery as part of the Radici del sud tour. I instantly liked their wines and their story but more importantly felt that they were all so very kind and nice.

Since then we have become friends and I must say I feel humbled by how well they take care of me when I go to visit them. When I visit Anna, Maria Antonietta, and Girolamo now they host me in their home, I go to the market and fish shop with Maria Antonietta, and she even prepares the coffee for me in the morning. 😊

Last week, I thus went to San Severo to attend their anniversary party on October 26th at Villa Jamele in Orsara. Orsara is in the northern part of Puglia, not far from Troia. Villa Jamele is owned by the local chef Peppe Zullo who calls himself ‘the farmer-chef’. He uses the local raw material to ‘re-create’ Mediterranean traditional food as part of a lifestyle.

D’Araprì winery, who are friends of Peppe Zullo, had chosen this beautiful venue for the celebration of their 40 years as producers of sparkling wine with the Champenoise method.

In an earlier article of mine, I wrote about their ‘jazzy’ history. Basically, Girolamo, Louis, and Ulrico had a jazz band back in the 1970s where they, while jamming together, started thinking of how to make sparkling wine with the Champenoise method. (See Sparkling Wine All Through the Christmas Dinner with D’Araprì winery.) Their idea was to make sparkling wine with native grapes such as Bombino Bianco and Montepulciano together with Pinot Noir. And…today also with Nero di Troia.

What is fascinating and a bit different for Italy perhaps is that they did not have a winery already to lean on or a winemaking path laid out for them in the 1970s. Some of their parents did indeed work with viticulture but for the rest they have step by step created their own destiny and winemaking story with passion and hard work. Winemaking was and is not their main profession but they all have other day jobs and thus have worked together for 40 years to build up D’Araprì winery and make it into the success it is today. Isn’t that amazing?

Had they been in the US, they probably would have been defined as living the American dream. So let’s say that they had a vision and from there have pulled through “living the Puglia dream”. 🙂 All right, this might sound a bit over the top…but I think you get the meaning here.

This is the history they celebrated at Villa Jamele last Friday. Today, their children are slowly entering the winery business and taking on more and more responsibility. Step by step they are moving towards a future generational shift. Mainly, Anna D’Amico, Daniele Rapini, and Antonio Libero Priore are today learning and working in the winery together with their parents.

Indeed, they all stood on the scene together last Friday to talk about their 40-year long wine history and celebrate. Behind every successful man stands, of course, also a woman. I think it is important to stress the support from their wives during the years. Today, sadly to say, only Maria Antonietta (Girolamo’s wife) and Annamaria (wife of Louis) are present. So, you can see that it is all a teamwork.

See a short live video from the 40th-anniversary ceremony…

The launch of Sansevieria sparkling rosé

The special moment of the evening was the launch of their new Millesimato Sparkling Rosé – Sansevieria. This is a sparkling wine made with Nero di Troia. The Nero di Troia grape is native to the northern part of Puglia, precisely in the area around Troia and San Severo.

What better way to honour your 40th anniversary than making a wine with the grape with a big G in the area?

The must has undergone fermentation in contact with the skins for a shorter period giving it a nice colour. It is a refreshing and smooth sparkling wine with structure and elegance. It was perfect for the 40th-anniversary party of D’Araprì winery. 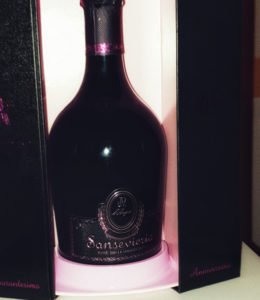 What’s in a name

The name Sansevieria has a history of its own. Sansevieria is the name of a plant that has its origin in Africa and southern Asia. Other names for this type of plant is, for example, devil’s tongue, mother-in-law’s tongue, snake plant, and snake tongue. It is a plant with sturdy leaves that can survive harsh climates in dry areas.

What is then the connection to this sparkling wine?

After the more formal ceremony, it was time to taste this new sparkling rosé wine paired with the amazing buffet at Villa Jamele. A lot of local pugliese delicacies were lined up during the evening… 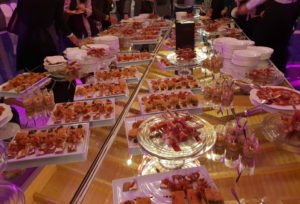 …or why not traditional orecchiette…

I followed Nicola and Dario and ended up at the table with the cool guys – joking – we were three cool ‘girls’ too. LOL

The anniversary cake…as an icing on the cake…

The festivities continued the day after with a lunch for friends and journalists who had remained for the night close to San Severo. We could enjoy a lovely lunch on the basis of seafood prepared by Mario Ottaviani and paired with different vintages of Gran Cuvée XXI Secolo. As I had to leave to catch the train at a certain point, I tasted the 2012, 2009, 2004, and 1999 vintages. They were all just fab. The 1999 was still very fresh, with a caramelized and almost creamy touch with notes of apricot, ripe fruit, honey…a delight to sip on.

The 40th-anniversary celebrations of D’Araprì winery was a great party and will surely take its place in history!