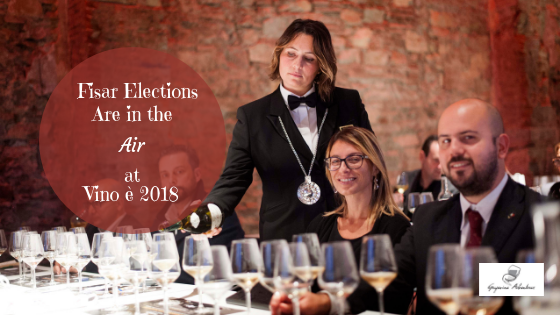 The signature wine event of Fisar – Vino è – has now reached its third edition. Just as the other years, there is a focus on smaller and mid-sized wineries from Trentino to Sicily. The idea has from the beginning been to concentrate mainly on wineries that can tell a different story, more focused on culture, territory, history, native grapes than the more mainstream well-known wineries. Then, of course, it is never possible to entirely walk the line. Larger wineries are to some extent present also, though never the main attraction.

Vino è has already from the beginning been so much more than a general wine tasting event. It is an event where you can discover the world of Italian wine, food, and the Fisar culture in an innovative setting. From wine tastings to masterclasses, vertical wine tasting seminars, cooking shows, roundtable discussion, and much more.

Indeed, it can be said that Stazione Leopolda is turned into an indoor vineyard designed by Fisar.

Vino è is a place for wine professionals as well as wine lovers to explore and together learn more about the culture of Italian wine.

Are you in Florence this weekend? Then head on over to Stazione Leopolda on any of the days 27-28-29 October and immerse yourself in more than 800 labels of wine from more than 120 Italian wineries.

Share your wine and food tasting experiences on social media by using the hashtags #vinoe2018 and #vinoefirenze! 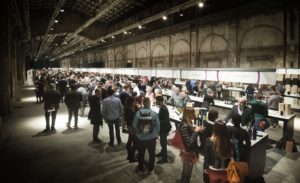 Vino è – Not only wine but also Election Time

Let us not forget that Vino è is an event designed by Fisar, i.e. one of the two larger national sommelier associations in Italy. The idea behind Vino è was in some sense to be a vehicle for the new and more modern and innovative image of Fisar. An innovative attitude that the sitting national board of Fisar has tried to implement during the last four years, in my opinion.

Anyway, it is now time for elections and to vote for a national board that will bring Fisar into the future during the coming four years. I am not going to go more into each ‘political’ programme of the two ‘lists’ you can vote for as a member. They are in a very concrete way named ListaUno and ListaDue. Even though the ListaDue then calls their campaign IlNostroTerroir.

Having been part of associations both in Sweden and in Italy, there is in the end not much difference, they can be wonderful spaces to make friends, collaborate, learn new things, and develop common interests and goals, i.e. working for a common good. Often though they can turn into spaces for people who want to fulfil themselves and search for a meaning in their lives leading then to internal conflicts. 😉

For me, Fisar has been a wonderful community where I have learned so much about the culture of wine in Italy but also about wine on a global level. I had the fortune of being part of Fisar Firenze and together grow and contribute to its innovation and modernization. The innovative trend has, in my opinion, become something many Fisar delegations all over Italy have embraced during the last years.

The wine culture, in general, is in a constant evolution all over the world. Wine has become something to embrace and to valorize as an identity of a territory and its history, not only on a local and national level but also as a global trend. Wine is no longer something for a select and snobby few guided by an often male sommelier in a stiff uniform.

Rather, wine is so much more. Just the other week, I read an article in the American digital magazine Seven Fifty Daily where they had talked to 10 somms about what they wear at work and why. Each and every one of them talked about how they have developed a personal style. Often to be comfortable or have the tools of their trade easily within reach, and perhaps most importantly, that several of them dress in order to make the client feel at ease.

As I wrote in an article recently, wine is so much more than stereotype or stigmatized perceptions of the trade,  chemical and technical processes of winemaking, or the mere serving of wine, it is:

…and so much more.

Well, I wanted to express my hope for

…a Fisar that continues to be innovative and open for new experiences.

…a Fisar that embraces change and is not afraid to take the tough decisions. Stepping back in time and trying to chase a past that is long gone is not the solution. We are no longer living in a society where the ‘south’ is talked about as a charity case, where having a website or going on social media is talked about as something in the far future, or where women are tucked away in a ‘pink weekend club’. Why not rather create a space where Fisar takes gender and wine culture to a next level…? Women and men need to work hand in hand for the future, not only of Fisar.

…a Fisar where a generational shift is possible. Where the generation stepping down is not afraid to take a step back and act as a precious historical memory and an important source of experience to the association. Their strength is to work in favour of Fisar, not in favour of their own personal fulfilment.

…a Fisar that walks in pace with time.

That was all folks!

May the best man, or team, win the elections. 🙂