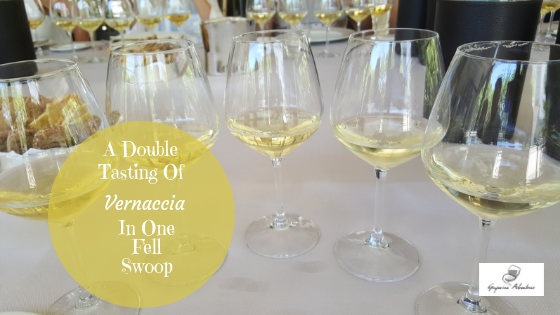 When Riccardo calls, I am ready to go…Joking LOL Anyway, on a not too warm day at the end of June, I was invited for lunch at Villa Cora to learn more about the winery Il Colombaio di Santa Chiara and their Vernaccia di San Gimignano.

I had already tasted their wines several times before, but this was the first time I participated in a double vertical tasting for lunch. Yeah, sometimes it is hard to taste wines, even though a lot of fun.

At this kind of tastings, you learn a lot and there are many impressions even though it is all very relaxed over a lunch and in an exclusive setting. However, with a double vertical tasting in such a short time I now also feel a bit like having gotten an overload of impressions and information in a very short time. I now find myself sitting here thinking where I should start… In brief, I feel a bit of a performance anxiety. 😉

Let us dive into the world of Vernaccia di San Gimignano and the Colombaio di Santa Chiara winery.

The Colombaio di Santa Chiara is a winery with a history and built on tradition as so many other wineries in Tuscany and all-around Italy. It is also a winery that has built on its history and experiences to create a ‘new’ history or story of wine production. Its history is not entirely linked to viticulture though as it, in the beginning, was a farm also focused on the breeding of cattle.

It was in the early years a farm where agriculture, breeding, and viticulture mixed together. They cultivated grapes and then sold them to other producers or activities who then vinified the grapes. The winery as we know it today did not exist in those years.

The owners today are the three brothers Giampiero, Stefano, and Alessio Logi. It was their father Mario who in the 1950s and onwards laid out the groundwork by gaining experience and a historical memory in the fields and step by step also planted vineyards. An experience that they today can use in their favour. They are now producing wines – with Vernaccia and Sangiovese in focus – that they want to be an expression of the local territory close to San Gimignano where they are located.

Alessio told us that he started to study oenology in 2002 and then also had the idea that the three brothers together should give it a go and start to produce quality wines. The brothers were in on it and today it is, therefore, the three of them who together run the winery.

Vernaccia di San Gimignano – A grape with a long history

Vernaccia di San Gimignano is a white wine with a history that dates to the 12th century. However, its first mention in a document seems to have been in 1276 in the Ordinamento della Gabella in the San Gimignano municipality. Already in that period, the Vernaccia wine was a profitable product. It was a wine treasured by kings, popes, as well as the rich merchants. Furthermore, it has been mentioned in literature by famous authors and poets such as Cecco Angiolieri, Dante, Boccaccio, Franco Sacchetti, Deschamps, and Chaucer. The name Vernaccia is believed to stem from the word Vernazza, which means embarcation or loading area.

Vernaccia was the first white wine to be awarded the DOC denomination in Italy in 1966. It was only in 1972 that the Consortium of the Vernaccia was founded, and later on, it changed the name to Consorzio della Denominazione San Gimignano. In 1993, it then also gained the DOCG denomination.

According to the regulation, the Vernaccia di San Gimignano DOCG should contain a minimum of 85% of Vernaccia grapes and max 15% of other, non-aromatic, white grapes cultivated in Tuscany. It can contain a max of 10% of the grape varieties Sauvignon and Riesling. The Riserva should be aged at least 11 months in oak barrels or steel vats, and at least 3 months in bottle.

The tasting at Villa Cora was split up in two different vertical tastings. First out was the Campo della Pieve Vernaccia di San Gimignano DOCG that is a white wine made with Vernaccia grapes from a single vineyard and matured only in cement vats.  They also do spontaneous fermentation without the use of selected yeasts. The juice then matures on the lees in cement vats for another 18-20 months.

The second vertical was with L’Albereta Vernaccia di San Gimignano DOCG that is also a monovarietal Vernaccia wine. The fermentation is carried out in oak barrels with indigenous yeasts. Thereafter, 70% of the juice is matured in oak barrels and 30% in cement vats. Since 2012, they use larger barrels for the maturation process. After the blending of the juice parts, it is all further matured in cement for 8 months followed by 1 year in the bottle.

The vintages were all very interesting in their own way. You could feel the freshness and complexity of aromas in all of them whether younger or a bit more aged. There was often a mix of citrusy, fruity and floral notes as well as more green and herby notes, a bit of spices, in all the tasted vintages. The acidity and minerality combined with the presence of the soil with its fossil shells are key factors in these wines. The 2015 had a bit more fruity and floral character, while the 2014 had a more Sauvignonesque (boxwood) character which is not really my favourite. However, overall I still really liked the 2014 as it was a structured and elegant wine.

The older vintages we tasted started to become more structured and caramelized in their character. The mix of fruity, floral, and herby is always present.  The 2013 felt more complex with a chalky undertone, fresh, salty, and elegant at the palate. In the 2012, I perceived a bit ‘smoky’ character, perhaps hinting towards flint, combined with greener and more herby notes. I liked the 2011, where I felt a sort of caramelized touch combined with a sweetness hinting also at herbs, tea leaves, etc. The more nutty or almondish aftertaste was very much perceivable. A very structured and smooth wine that is a beautiful expression of the Vernaccia.

In the L’Albereta wines, the oak is, of course, perceivable and I must say I like the vintages where they used big barrels more (from 2012). I am probably more in favour of their wines aged in cement, but I do recognize that the oak gives more structure and character to the wines. Though I still sometimes feel the oak to be a bit too intrusive. That is, however, my cement loving side talking…LOL

The vintages we tasted were structured and elegant with a mix of fruity, floral, spicy, and herby notes. Often I also felt notes of flint or ashes. The taste was in general fresh, salty, and mineral with a hint of a spicy and floral side often. The 2015 still felt very young and with a good acidity while the 2014, 2013, and 2012 had a much better structure that improved year by year though also quite woodsy. In the 2012, I felt a touch of musk as well as a spicy character. The 2011 showed a more caramelized and sweet character both at the nose and the palate. A taste of vanilla and a smooth and elegant white wine though too influenced by the oak for my taste.

This double vertical tasting was really a great opportunity to taste two different types of Vernaccia wines, two different faces of Vernaccia so to say. I think that the aromas and the taste of the grape had a more pure and cleaner expression in the Campo della Pieve wines and, all right, I might have expressed a slight fondness for these wines. Here you could feel the grape variety and the terroir in the wines with hints to the special mineral soil with its fossil shells in this area that used to be the bottom of the sea a couple of million years ago.

However, this does not mean that I did not like the L’Albereta wines that had been matured and aged in oak barrels. The oak certainly gives structure and elegance to the wines and brings out other flavours and traits in the Vernaccia wines that are just as fascinating. The 2011 might have been a bit too influenced by the oak for my taste but still, it had a nice caramelized character and a sense of ripe fruit.

Also, take a look at this yummy dish at Villa Cora that we had the opportunity to enjoy after the tasting, namely Risotto con il pesto di prezzemolo e aglio e bottarga. 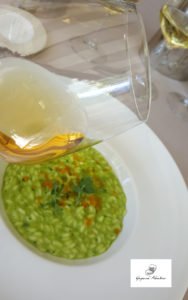