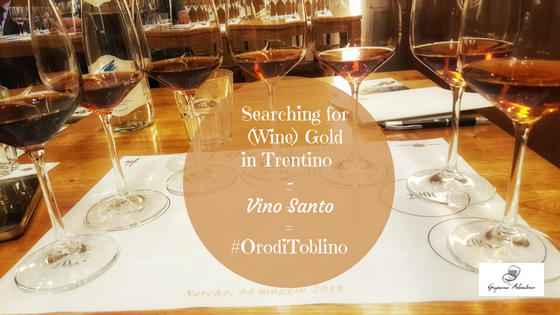 What could be better than go searching (panning) for gold in Trentino…- #oroditoblino? And to add to that, the kind of gold you can sip on and feel good about. It might not make you rich when it comes to money, but it makes you feel rich in your heart.

How can you say no to an invitation where you get the chance to be a part of a vertical tasting of Trentino DOC Superiore Vino Santo with vintages going back as far as to 1965 and surrounded by the beautiful mountains? All right, so during the wine tasting, we were in the cellar of Hostaria Toblino that is the restaurant and wine shop of Cantina Toblino. However, as soon as we stepped outside the Hostaria the surrounding mountains were there.

I arrived in Trento around noon and together with another fellow wine writer we were picked up by Lorenzo Tomazzoli, the oenologist of Cantina Toblino. It was a bit cloudy and grey day but still I stayed glued to the window in the back seat just soaking up the view of the mountains. And I am not even really a mountain but more of a seaside person. But when I see the mountains it always feels just as powerful. 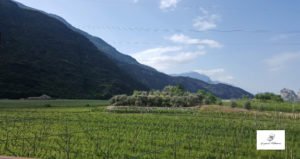 I am grateful to Carlo Vischi who invited me via Cantina Toblino and gave me the opportunity to discover more about Vino Santo – not Vin Santo of Tuscany – and the Nosiola grape. I had tasted Vino Santo before, but I must admit I did not know that much about it as a wine after all. So, a full immersion into this sweet wine was just what I needed.

Cantina Toblino in Sarche is a cooperative with 800 members that cover in total 500 hectares of vineyard. Cantina Toblino also has an own farm that belongs to the winery where they are certified organic. The winery was founded back in 1960 and is today the main producer of Vino Santo. The current president is Bruno Lutterotti and the General Manager Carlo De Biasi who were both attending the vertical tasting. It has a long experience and tradition of producing Vino Santo as they made their first Vino Santo in 1965 that was also the year of their first harvest.

Vino Santo is made with the Nosiola grape that is a native grape to Trentino, especially in the areas around Toblino and Valle dei Laghi as well as near Lavis. It can also be found cultivated in Lombardy and Veneto but Trentino, in the province of Trento, is surely its home.

Nosiola can be used to make fresh, crisp white wines and within the denomination Trentino Nosiola DOC a minimum of 85% Nosiola is required. However, it is its use to produce Vino Santo that we will focus on here. According to Ian D’Agata (p. 377 in Native Wine Grapes of Italy), the Nosiola produces

“one of the world’s greatest sweet wines.”

Nosiola has always been grown in small vineyard lots on the mountains and has never been eliminated in favor of planting international grape varieties or similar, rather it has a continuous historical line that can be traced back to the 15th century. D’Agata further writes that the first Vino Santo with Nosiola was made in 1822 by Giacomo Sommadossi who worked for the winery of Count Wolkenstein.

In reality, only 10% of the Nosiola vineyards are suitable to produce grapes for the Vino Santo in Trentino. The Nosiola grapes used for Vino Santo are harvested in the second half of October when they are beginning to become overripe, though not completely. Lorenzo Tomazzoli, the oenologist at Cantina Toblino, told us that Nosiola is a grape that ripens late, more or less in the same period as the red grape varieties.

After the harvest, the grapes are placed to dry on mats in the vinsantaia (the room/loft for drying grapes) that is located in direction south-north. The windows are kept open so that the Ora del Garda, that is the wind that blows from south to north, can properly ventilate the room.

The drying period lasts from early November to the Easter week the following year. The first two months, the grapes are drying very slowly while the noble rot then starts to develop on the grapes during January and February. According to the regulation, the dried grapes can be pressed from March 1 onwards but generally, they are always pressed after Easter Monday. Approximately 50% of the grapes are simply dried while the other 50% have been attacked by the noble rot.

The fermentation can last as long as two to three years due to the high concentration of sugar and thereafter it matures in small oak barrels for up to ten years. In fact, it is called “il vino d’attesa” (the wine to wait for) as it can indeed take ten years before it is ready to drink.

A vertical tasting of Vino Santo at Cantina Toblino

Vino Santo is a sweet wine that really can be considered the true expression of a territory, namely Trentino. It is produced in very limited quantities, only 20,000 bottles of 0,5 liters per year, which, of course, makes it difficult to reach a broader audience or to get that kind of visibility and recognition that it deserves.

How many of you outside Italy have ever tasted a Vino Santo…? Drop a line in a comment below!

Vino Santo is a rich sweet wine with very complex aromas and flavors as well as a distinct acidity. I will try and recount some of the impressions and emotions I had while tasting these very interesting sweet wines at Cantina Toblino.

As mentioned above, we tasted the vintages 1965, 1971, 1978, 1984, 1990, 2000, and 2003. There was a linearity in all the vintages and recognizability regarding aromas and flavors. Some vintages might have been a bit more closed up while others were standing out more. In general, the freshness and minerality combined with notes of dates, ripe fruit such as apricot and peach, candied fruit, honey, orange blossom, balsamic and a bit herby undertones were present to various degrees in all the wines. The taste was smooth, velvety, yet fresh, with an aftertaste of almond in most cases.

The 1965 vintage I really found a fantastic sweet wine, you just do not think that it actually has 50+ years on the neck when you taste it. All right, you do feel that it is an older vintage but I would never have thought that it could still seem so fresh and vibrant. In the beginning, it was fairly closed at the nose, but after a while, it opened up with a bouquet of aromas. It was compared to a Marsala or a Porto, for example.

All the vintages we tasted had a longevity that was astonishing even though it was discussed that later years, such as 2000 and 2003, might not arrive at 50 years. This might be because the later years have been warmer, the fruit is riper and that in the older vintages the wines were more tannic.

A gold rush in Trentino

Well, there might not really be a true gold rush in the Trento area though still, we experienced a small sort of discovery during our Vino Santo tasting at Cantina Toblino where we were a group of journalists, sommeliers, and other wine professionals that had gathered.

Vino Santo is as precious as any vein of gold discovered during the gold rush in older times. It is a sweet wine very much connected to the local terroir and territory around Toblino and Valle dei Laghi in Trentino. Nosiola is the grape protagonist here that gives a sweet wine with a distinct character.

The vertical wine tasting was indeed very interesting and I am very happy to have been invited to such a unique moment. After sipping on this precious #oroditoblino it was fun to hang out with fellow wine writers visiting the nearby Castle of Toblino before dinner time.