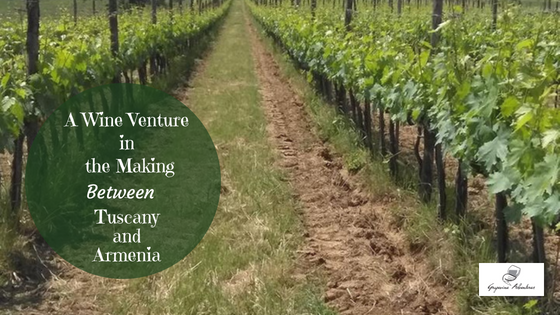 Earlier in April, for Easter Monday, I got invited to a lunch by Riccardo Gagliardi and his family at their place in Castiglion Fibocchi, close to Arezzo. We had been talking about wine in Tuscany and in Armenia online but for the rest, we had never met, so it was a lunch out in the unknown.

Riccardo has not only an estate in the Valdarno area close to Arezzo but also some vineyard lots and a small winery in Armenia. When we chatted online, I was very curious about their fairly new adventure with producing wine in Armenia. Riccardo has also a professional hunting safari business in Armenia. Thus, he has a lot of experience in working in Armenia.

The lunch was a lot of fun, they are a really nice and chatty family and they had prepared a lot of food. The surroundings are so beautiful and I could get a better picture of it all on our after-lunch walk. The day was just perfect, the weather was sunny and nice and they came to pick me up and brought me back to the train station in Arezzo. What better service than that could one ask for…? 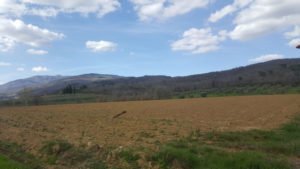 Fattoria Bellosguardo getting back to making wine

The name of the estate is Fattoria Bellosguardo. However, they have not produced any wine for the last 20-25 years because Riccardo did not want to continue his father’s wine production business that was more focused on quantity than quality. He even went ahead and wiped out most of the 17 hectares of vineyard that they had. He only kept a few hectares of Sangiovese back then.

Recently, his son, Niccolò, expressed an interest in starting up the winemaking activity again and they decided to give it a try. Thus, it is now a winery in the ‘re-making’. They are keeping it smaller this time and they want to focus on quality and on native grape varieties. They are starting out with Sangiovese that is the first wine that will be ready to be launched. When I visited they were to plant some more hectares of Sangiovese and Foglia Tonda I believe.

Their oenologist is Federico Renzi and he told me that he met Riccardo years ago while fishing at a nearby lake. They thus share the passion for both wine and fishing. Anyway, more recently they started talking and apparently, Riccardo told him that he wanted to start making wine again with his son. Federico was up for the job with this adventure and they went on discussing how to go about it all.

Niccolò is the one who runs and oversees the daily work in the vineyard and in the winery but, of course, Federico is the one who gives advice and monitors the winemaking proceedings. When I talked to Federico, he further stressed that the area is, in his opinion, very good for viticulture with a soil that has a right mix of clay and sandstone. He pointed out that it gives a good minerality and elegance to the wines. Therefore, he says he is not the one making any elaborate tasks in the cellar but that rather that nature is doing its job on its own in the vineyard.

As this article is being published today, the first wine – Sortito 2016 – of Niccolò and Riccardo at Fattoria Bellosguardo together with their oenologist Federico, is being launched to the market. This is the more simple and easy Sangiovese wine that has only been matured in steel vats followed by 5 months in the bottle. They say that it will be available to purchase from today but that they are not announcing any big launch right now. They will do a launch party further on.

The second Sangiovese wine is aged in barrique but it still needs more time in the bottle so, therefore, it will be commercialized at a later date. They told me that they believe the Sangiovese of 2016 to be of good quality, so they are happy about their first vintage. I tasted a bottle sample of the Sortito wine, and I agree that it is fresh and has a nice fruity nose.

A wine adventure in Armenia

Well, not only are they producing wine in Tuscany, they also have a hunting safari business and now a small winery in Armenia, as I mentioned above. Federico, the oenologist, was also a bit of the promoter of embarking on a winemaking adventure in Armenia. Riccardo told me how he is always very concrete and likes to make things happen fairly fast if he sees that something is possible. Therefore, he started to do research and look into how they could set it up.

Fairly soon, about a year ago, he went to Armenia with Federico and they decided to go for the grape variety Areni. The Areni grape is a very ancient grape variety that can be traced back to more than 7000 years ago in the Transcaucasus region and they told me it is considered the grandfather grape of Pinot Noir. It might more be a grape similar to Pinot Noir than actually being related. I haven’t looked further into it so I am not doing any proclamations here. (This article is not about the origin of Areni or Armenian winemaking but about the activities of Fattoria Bellosguardo.)

They went on and rented 10 ha of vineyard where they cultivate Areni grapes. Already today they have the first 100 hectoliters of grape juice that is maturing part in steel vats and part in Georgian amphoras.

Riccardo told me how they have been asking around, researching, and driving around in Armenia to find old Georgian style amphoras (probably again the local Armenian amphoras that still can be considered to be after Georgian style) to buy. The difficult thing is to find lids for the amphoras as they are not made in a recurrent standard size, rather they need to have the lids tailor-made for each amphora.

This is a very exciting winemaking adventure and they believe to be able to launch a first bottled wine already this year. Stay tuned!

As you may have learned by now in this article, Fattoria Bellosguardo has a lot of things going on. They are also working on their website to get online so that you can read more about their story and their wines. So look out for their Tuscan and Armenian wines.

Riccardo, Niccolò, and Federico were guests at my #WinesOfItaly #LiveStream in April. Below you can listen to the entire episode.