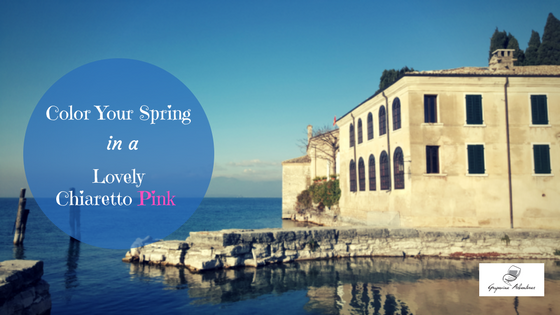 On a sunny day in December last year, I had the pleasure of going on a tour to Lake Garda and more specifically to the Bardolino area. It is always amazing to visit the beautiful Lake Garda. And to be visiting on a sunny winter day with a clear blue sky was even better.

An azure blue-sky becoming one with the blue water fits with the Chiaretto Pink color. Just as they say on the website, Chiaretto Pink rosé wines pair well with blue jeans and an easy-going lifestyle.

Afterward, we went to Villa Cordevigo for a tasting of many different Chiaretto rosé wines. The icing on the cake was when we got to taste an Oseleta 2007 from Villa Cordevigo. Franco Cristoforetti who is the owner of Villa Cordevigo and also the president of the Bardolino Consortium was kind to open this bottle for us to taste.

It was a fun day where I learned many new things about the Bardolino area and their wines. So, for my curious mind, it turned out to be a perfect wine day in Veneto.

This is an article that has been half-ready for quite some time, but then what better period to publish it than right now during the spring…? Don’t we all feel like sitting out in the sun now and sip on a fresh and fruity Chiaretto Pink wine?

What do we know about Bardolino and Chiaretto Wines?

Bardolino is a village just by Lake Garda that has given its name to the wine denomination Bardolino Doc. The Bardolino Doc is a red wine while the rosé wine is called Chiaretto. Bardolino became a Doc in 1968 just a few years after the institution of the DOC denomination in Italy in 1963. Soon thereafter the Bardolino Consortium was founded in 1969.

Well, we can say that the same goes for the Bardolino area.

It was indeed in the monasteries in the area during the Middle Ages that the winemaking techniques reached their finesse. It was, however, in the 19th century that the Bardolino wines would start becoming more known as quality wines thanks to their longevity and aging potential. These were characteristics that were discovered and developed in this period.

The Chiaretto is a rosé wine that is very much connected to the Bardolino area and denomination. It dates to the end-19th century when the local lawyer Pompeo Molmenti came up with the idea to produce this kind of rosé wine at his winery by Lake Garda.

If we move ahead to the 20th century, the Chiaretto became a Doc wine when the Bardolino as we mentioned above was awarded this denomination. However, let us fast-forward to the 2000s to get to the pink goodies regarding this rosé wine.

In 2014, the producers of Bardolino Chiaretto decided to put in motion a so-called rosé revolution. This means that they decided to focus on some common denominators that would make the Chiaretto into an easier recognizable rosé wine. A sort of branding of the Chiaretto rosé.

Thus, it today has a pale pink color, a distinct freshness, minerality, and sapidity. The notes are mainly of citrus fruits, floral aromas, followed by a touch of spices.

What is then particular about the soil in this area? Well, about 1,5 million years ago an ice glacier pushed down from the Brenta Dolomites and formed Lake Garda. The glacier dragged rocks with it down from the mountains contributing to the hills surrounding the lake. When the glacier finally melted it turned into the today’s freshwater lake.

As you can see in the video below, the view over Lake Garda is just stunning.

The rocks that were pushed down by the glacier from the mountains is what gives the soil its minerality and the wines their freshness and saltiness today. It is also the reason why the Chiaretto and Bardolino wines are considered mountain wines even though the climate at Lake Garda is fairly mild.

So far, we have talked about the history, territory, and soil. But what about the grapes?

The grapes used for both red Bardolino and Chiaretto rosé wines are mainly Corvina, Rondinella, and Molinara.

Corvina is a grape that might be more known for being the big and important grape in the Amarone and other Valpolicella wines. There seem to be various discussions regarding the history of the Corvina grape where some say it was used already in the early 17th century in Veneto for winemaking while others stress it was later on.

The Corvina grape has a thick skin that makes it suitable for drying. Thereof its use in the Recioto and Amarone wines where the grapes are partially dried to give them a sweet character. It is a grape that rarely is vinified as a monovarietal but rather in a blend with Molinara and Rondinella. Corvina gives fruity and quite tannic wines.

Rondinella and Molinara are also native grapes to Veneto. There seem to be no records about the Rondinella grape before the end-19th century. The vast use of this grape seems to have started after the phylloxera hit Europe. It is said that it is a grape that gained in character by the graft with the American rootstocks and that this might explain why it was fairly unknown before.

Molinara is a grape that has become a bit forgotten today even though it is still used in the production of wines mainly in the province of Verona. It is a grape that gives wines with a clear almost pinkish color, good acidity and notes of berries, spices, and herbs. Therefore, it is for the most part used in blends with other more powerful grapes.

We started out with a light lunch and a short walk around the grounds of Villa Cordevigo. This is a Luxury Wine Relais and Hotel in a beautiful setting in Cavaion Veronese in the province of Verona. As I mentioned before, it is owned by Franco Cristoforetti and his family. If you are longing for a nice wine and spa holiday in Veneto, this is the perfect place. 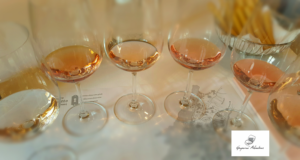 We had a blind tasting of 21 different Chiaretto rosé wines to get a deeper experience and understanding of the rosé wines produced in this area. It was very interesting to have the opportunity to analyze their colors, aromas, and taste without knowing much about the producers beforehand. Now, I am not going to go into each wine we tasted here.

The color of the Chiaretto wines is, as I mentioned before, generally a pale pink or salmon pink. Then the nuances can change a bit towards lighter or darker. The wines are fresh, a bit salty and mineral. The Chiaretto wines are mainly fruity with notes that can range from cherry, strawberry, wild berries to more white fruits such as apricots and citrus fruits. It is also rosé wines that can have floral aromas, a touch of spice such as clove, cinnamon or vanilla, as well as a herby or balsamic undertone.

Be Trendy, Be Chiaretto 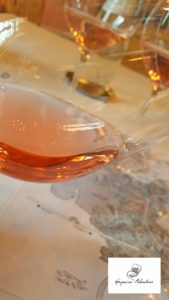 Since 2014, when they redefined the Chiaretto brand, the Bardolino consortium has worked well to communicate the new young and fresh Chiaretto DOC image. Thus, it is a wine that suits every occasion and that can be sipped on with friends in an easygoing and laidback way. These rosé wines fit every season and can be paired with pasta and pizza as well as Asian fusion or other international food.

There are 100 producers of Chiaretto and Bardolino wines that produce more than 8 million bottles of Chiaretto every year. The Chiaretto wines are going very strong abroad, especially in Germany, Scandinavia, Canada, and the USA.

So, if you want to be cool and chill out with friends for an aperitif or a dinner, then Chiaretto rosé wines are a perfect choice.