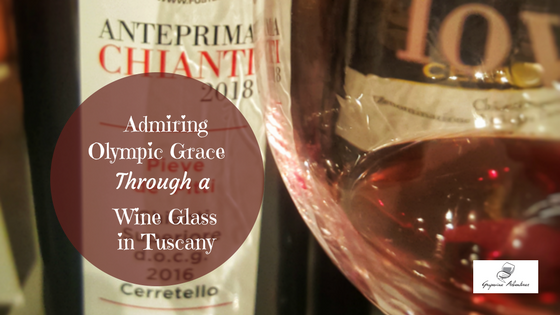 The period of the Anteprime Toscane is always a busy period. A lot of tastings and side events are going on all through Tuscany during a few weeks in February. I only went to the Anteprime that took place in Florence this year, still, it turned into some intense days.

Also, it was the week before my friend Nadia hopped on a plane to Singapore to spend the rest of the year there. Therefore, we took all the opportunities we could get to taste wines together at the Anteprime here in town.

Another event in February this year was, of course, the Winter Olympics. What better way than to unite the two fun events by pairing some wines from the Anteprime with Swedish Olympic medals. Especially, medals from the cross-country skiing as I just love watching that sport. My Scandinavian side needs to come out somewhere…😊

Now, I am not going to go through all the Swedish Olympic medals and neither talk too much about all the wines we tasted at the different Anteprime Toscane. I will talk about the medals in a random order, not in the order they occurred. My thought was to choose some medals that moved me more and pair them with suitable wines. And I know you will probably laugh but when you watch a co-national take home Olympic gold or silver, you really do cry with them.

Let me start with probably the last Swedish Olympic medal this year, namely the one that was won by Stina Nilsson at the 30 km cross-country skiing on the last day of the Olympics in PyeongChang. Many were probably expecting Charlotte Kalla to give the powerful Norwegian Marit Björgen a run for the gold medal. However, after a good start, Charlotte then remained more and more behind.

The Swedish skier that hooked on to another of the Norwegians was Stina Nilsson. She had started off great with a gold medal in the ladies’ 1.5 km sprint race. However, I have chosen to talk about her bronze medal here because she was hanging on like a continuous shadow behind the Norwegian to then sprint away from her on the finish while entering the stadium.

The touching and fun thing was that she hit the finish line thinking she came in fourth, having no clue she had taken home a bronze medal. After a few seconds, she realized she had come in third and of course, started screaming and jumping for joy.

What does this have to do with wine you might think?

Well, at the Anteprime for the minor consortiums in Tuscany that took place at Fortezza da Basso on February 10th I started off at the booth of the consortium of Cortona producers. I was waiting for my friends Nadia and Laura to join me. At a certain point, I saw another booth with wines I did not really know, namely the Consortium of Terre di Casole. I got curious and randomly asked them to pour me one of the wines presented.

This was the wine Alberaia IGT Toscana Casole d’Elsa 2015 from Tenuta delle Macchie winery. It is a 100% Sangiovese wine that is fermented in steel vats and then matured in second passage barriques of French oak. The soil in the vineyards where the Sangiovese is being cultivated consists mainly of clay and a bit of sand.

The result is a Sangiovese wine with very smooth and elegant tannins and distinct floral notes. They told me that the particular aroma is that of the passion fruit flower. Of course, you also feel the typical notes of red fruit but it is indeed really the floral and a bit herby undertones that are standing out.

Thus, I have chosen to pair the Swedish bronze medal with this floral Sangiovese wine because they were both very unexpected but beautiful happenings.

An unbeatable classic skiing strength paired with a classic Chianti

The Ladies’ 4×5 km Relay (stafetten) is always a very nerve-wracking thing. The hopes were probably high for the Swedish female skiers to take a medal as they have a very strong team for the moment. On the first leg, we remained quite behind and Charlotte Kalla entered the second leg around 25 seconds after the leading group of skiers.

Now, I really got goosebumps watching that leg because OMG she is such a strong and powerful skier. She had such a force and step in her skiing and she basically recuperated all the 25 seconds.

The last two legs were freestyle skiing and the two Swedish ladies were at the front with the Russian and in the end the Norwegian. Everyone was probably waiting for Stina Nilsson to sprint past Marit Björgen on the finish but the Norwegian was too strong. However, Sweden took home the silver medal and I, of course, was very happy at home stretched out on the couch. 🙂 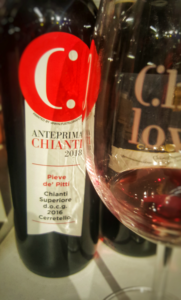 The wine I have chosen to pair with this medal is a classic Sangiovese from a Chianti producer in the Colline Pisane subzone. Now, one might argue that the strength of Charlotte Kalla ought to be paired with a powerful Chianti from the Colli Senesi area and I was thinking of that. However, in the end, I went with the Chianti Superiore DOCG Cerretello 2016 from Pieve de’ Pitti in the Terricciola area close to Pisa.

This Chianti wine from Pieve de’ Pitti is a classic in its appearance just as the classic skiing style and very fruity, smooth, and elegant yet powerful. It is made with only the native grapes Sangiovese, Canaiolo, and Malvasia Nera and then vinified in cement tanks. The 2016 vintage is described by Pieve de’ Pitti to have been a year that conferred lots of aromas as well as an amazing structure, and elegance to the wine.

What better way to sum up this pairing than with a classic, velvety, and structured Chianti wine with a powerful Swedish female skier full of grace who helped to take home a silver medal for the Swedish team.

This was the first gold medal of Olympic Winter Games in PyeongChang that was taken home by Sweden. The Ladies’ 7.5km x 7.5km Skiathlon meaning that the first 7.5 km is in classic style and the second 7.5 km are in freestyle. In the middle, between the two skiing styles, they change skis.

On the first 7.5 km in classic style, Marit Björgen was ending with the lead. On the second leg in freestyle, Charlotte Kalla came on stronger and stronger and after a while managed to take off from the group and leave also the Norwegian behind. It was wonderful to watch how versatile Kalla is as a skier and how she once again combines elegance, strength, and speed. This would indeed set the pace for the Swedish cross-country skiing ladies for the rest of the Olympics. 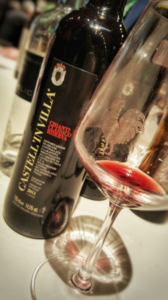 This first glorious gold medal I have paired with the Chianti Classico Riserva DOCG 2011 from Castell’in Villa winery in the Castelnuovo Berardenga area. Castell’in Villa is a small Medieval hamlet that today is in the ownership of the Principessa Coralia Pignatelli who actually live in the tower of the small hamlet.

This is a 100% Sangiovese wine that is then aged for 2-3 years in big barrels of Slavonian oak and refined in the bottle for about a year. It is a wine with a good acidity, wonderful notes of red fruit, such as cherry, spices, and velvety and elegant tannins. A full-bodied wine with an amazing structure and long persistence.

What better wine to pair with the Swedish gold medal than this well-balanced, smooth, age-worthy, and persistent Chianti Classico Riserva wine…? Also, the rich history of Castell’in Villa makes it into a classic wine.

February was a dynamic month filled with many wine events during the period of the Anteprime and many Olympic sports competitions to watch on TV. Actually, I am such a nerd that I got the Eurosport app in order to be able to follow the Olympics also while being out on different wine events. LOL

Here, I wanted to highlight a some of the wines I tasted during the Anteprime and I thought it could be a fun idea to pair them each with a Swedish Olympic medal. Even though you are not into sports, I hope you can enjoy the article anyway. The most surprising wine during the first days of Anteprime was indeed the Alberaia 2015 from Tenuta delle Macchie because I did not expect a Sangiovese like that. And that was quite cool as a discovery.