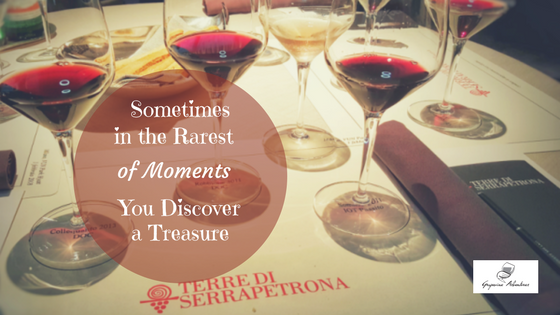 Last autumn, I had Stefano Graidi from Terre di Serrapetrona winery in Le Marche as a guest at the #WinesOfItaly #LiveStream. (See the video at the end of this article.) This was an opportunity for me to learn a #shitton about the Vernaccia Nera grape and the “fermo” or “still” red DOC wine made with this interesting grape.

While talking to Stefano in my #WinesOfItaly #LiveStream, I got more and more curious about this unique wine. It is a fairly young DOC denomination that was created and approved as recently as in 2004. And it is not exactly the wine you find in every wine bar around town… 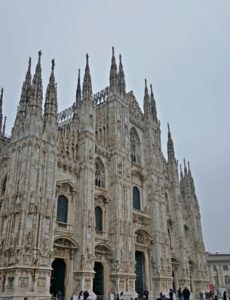 Therefore, when I got invited by Stefano at Terre di Serrapetrona to a wine tasting they were organizing in Milan, I, of course, said yes. The venue was the very cool and VIP 2-star Michelin restaurant VUN at Park Hyatt in the center of Milan. Taking the metro to Duomo, with the beautiful cathedral smack in your face, Park Hyatt is just a few steps from there.

On the day of the event, I still had a cold but no way was I missing the chance to taste these wines so I went anyway. Probably, it was psycho-somatic but when I arrived in Milan my cold already felt much better. LOL

Vernaccia Nera can be found not only in Le Marche but also in some other region such as Sardegna and Umbria, however, the main area where it is cultivated is in the province of Macerata. It is a grape with a long history dating to the Roman era and it has always been considered as a grape variety giving rise to high-quality wines. In the end of the 19th century, it had more or less gone lost and still today there are very few producers who cultivate it even though it has been recovered. The DOC area that we are talking about here comprises only about 40 km².

Terre di Serrapetrona winery is situated on 500 m altitude on the hills surrounding Macerata in Le Marche. It is an area that is close to the Mount Sibillini on one side and the Adriatic sea on the other side. This means that they get the best of the winds from both the mountains and the sea blowing in.

The winery has been owned by the Graidi family since four generations back. Stefano says that it was his grandfather’s passion for the Vernaccia Nera that, in the end, brought them to start producing it in a more organized and continuous manner. Since about 15 years, they produce high-quality Vernaccia Nera wines and have also taken the initiative to work toward the DOC denomination that was approved in 2004.

The estate comprises 17 ha of vineyard lots of which around 10-12 ha is Vernaccia Nera and the rest is a mix of Pecorino, Sauvignon, Pinot Noir, and Merlot. They are a conventional winery with a vision to be respectful towards nature and try to use as little invasive products as possible. The ecosystem and the care for their surroundings are very important to them even if they are not certified organic. The position, climate, and altitude of their vineyards would make it difficult for them to be organic.

They produce the four wines Blink, Collequanto, Robbione, and Sommo. Below, I will talk more about these wines.

As I said in the beginning, I went to Milan in early February eager to get to taste the Vernaccia Nera wines from Terre di Serrapetrona. Who wouldn’t want to stay in a room like this on the next holiday…?. When I entered the Park Hyatt and saw the VUN 2-star Michelin restaurant and their bar filled with artisanal gins I thought like…yeah, I could get used to wine tastings here. LOL 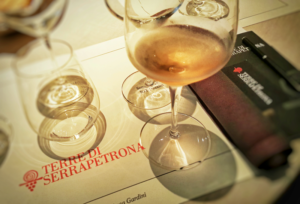 As a warming up to the real tasting we got to start with a glass of Blink, a sparkling Pinot Noir Rosé wine made with the Charmat method. This is a fresh and fruity sparkling wine that was perfect to sip on while waiting for the fellow tasters to arrive. I also took the opportunity to go and say hello to Stefano Graidi.

Soon, Luca Giardini, who was our guide for the day in the discovery of these wines from Le Marche, entered the scene. Luca Gardini is a well-known Italian sommelier and a bit of a showman who in 2010 was awarded the title Best Sommelier in the World. He has his origin in Cervia in Emilia-Romagna, or rather in Romagna, which for those of you who know that region, makes all the difference.

We were indeed guided through the three 100% Vernaccia Nera wines from Terre di Serrapetrona with wit and precision. We started out with Collequanto DOC 2013 that matures 18 months in steel vats, 12 months in oak barrels followed by at least 6 months in the bottle.

In this wine, you feel the beautiful expression of the Vernaccia Nera grape and its typical aromas such as black cherry, pomegranate, floral, and spicy notes. Luca Gardini stressed that 2013 was a tough year though not a bad year. In fact, the Collequanto 2013 has a good acidity, a bit of a green touch under the more dominant fruity and floral notes. There is also a hint of citrus fruit that comes out after a while. Though you feel the tannins they are not intrusive.

I was still marveling over Collequanto when it was time to focus on Robbione DOC 2010. Robbione is a wine that is often compared to an Amarone wine as the winemaking processes are very similar. A part of the grapes are dried on the vines for 15 days and another part are dried on mats in fruttai for about one month. The grapes are then pressed and fermented separately. The grape juice is blended in a moment that is decided on at the discretion of the oenologist.

Have you ever tried wines made with Vernaccia Nera grapes? For me it was the first time the other day in Milan. 🔝🍷 … I learned a lot about these red, still, wines sipping on them while listening to Stefano Graidi, the owner of @terrediserrapetrona , and Luca Gardini @gardiniluca talk about their particular traits.🍇🍷 … This is a grape variety native to Le Marche. 👉 Stay tuned for more about this tasting on my blog soon ✏ @parkhyattmilan … #grapevineadventures ——————————————- * * * * * #allaboutlemarche #igersmilano #instapicture #milano #inlombardia #milanocity #Vernaccianera #lombardygram #VUN #parkhyattmilan #TerrediSerrapetrona #motivation #motivate #motivational #italianwine #italy #lemarche #winetasting #winedown #viner #wineblogger #livestreamer #awesomewine #bestvideo

Robbione is matured for 2 years in steel vats, another 2 years in oak barrels, and finally, it is laid own in the bottle for 6 months. The result is a powerful and elegant wine with lovely notes of fruit and spices. The tannins are smooth and the taste is rich and velvety. That this wine had already 7 years on the neck was clearly perceivable by its structure and the tannins that were really very soft and elegant.

The last wine of the day was Sommo IGT Passito 2011, that is a passito. The grapes are here dried in the fruttaio for a longer period. The juice then matures in both French oak and chestnut barrels. It is a sweet wine that is not too overwhelmingly sweet. The tannins are perceivable also in this passito and an expression of the grape variety. Sommo is more of a meditation wine really than a wine to pair with desserts. (To watch the live video from the tasting, see here.)

The verdict of Luca Gardini was that these are wines with a great substance, a beautiful fruit, soft tannins, and very enjoyable to drink. I must say that I very much agree with him. Furthermore, I also agree with Ian D’Agata who in his Native Wine Grapes of Italy writes that Vernaccia Nera has the potential to give rise to “some of Italy’s greatest wines” (pp. 155-156) but that they, unfortunately, are not very known or easy to get hold of.

A Wine That is A Rare Treasure

Now, this might seem a bit exaggerated for some of you, though I do think it is a wine that is a treasure. However, these lesser known grape varieties that are such an important heritage in Italy, are indeed something to be discovered. Vernaccia Nera is certainly one of these grapes.

The wines from Terre di Serrapetrona that we tasted at the VUN restaurant at Park Hyatt in Milan are, in my opinion, really special. They have complex aromas and a good acidity combined with tannins that are present but not disturbing. With the aging, they smoothen out, even more, turning the wines into an expression of the terroir in this corner of Le Marche.

And the afternoon was not over yet… 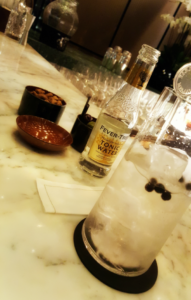 …the cool bar at Park Hyatt has a large collection of artisanal gin so while waiting for the train I took the opportunity to order one. This one here was made with a gin from Van Kleef, a Dutch distillery. And it was just awesome.

Would you like to learn more about Terre di Serrapetrona winery, you can watch the episode below where Stefano was a guest at my WinesOfItaly LiveStream.