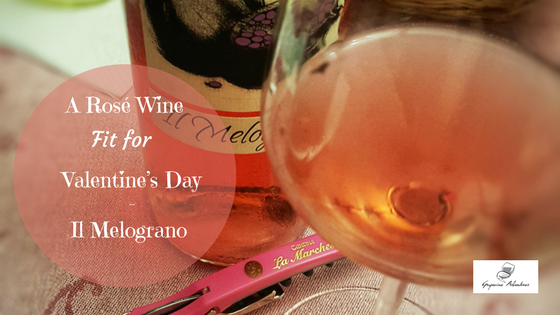 What could be more romantic than sipping on the rosé wine Il Melograno today on Valentine’s Day? Today is a day all about connections and relationships with other people. Here I will, of course, talk about wine relationships mostly. 🙂

Sometimes things just click with people, right? And you feel like you have known people for a long time that you just met the other day.

This is how it was when I met the owners of D’Araprì winery last year. Then, when Girolamo from D’Araprì winery brought me to visit his friends Marika and Sergio at Cantina La Marchesa close to Lucera in Puglia in mid-January it felt just the same. We had a great time while they showed me around the winery and talked about the work they do and the wines they produce.

The fun continued during the tasting which then turned into a complete aperitivo-hour where Sergio started cutting up local cheese and cold cut delicacies. Girolamo had to go back to work, so I stayed on with Marika and Sergio sipping on their wines and chatting away.

Soon we were joined by a group of their friends and it all turned into an aperitivo-party where Sergio then took out his collection of cigars and all the ‘men’ started smoking. LOL

Little did I know, when I first met Marika and Sergio, that I would be visiting them just a few days later again…

The special connections continued during that week in January. I was invited to Puglia a month ago for a tour of Ascoli Satriano and the surrounding areas. Therefore, I thought it was a perfect opportunity to go and visit also D’Araprì winery in San Severo before the actual tour started.

When I was welcomed by Maurizio Tardio, who organizes ‘edumotional‘ press tours in Puglia via the association Inchiostro da Gustare, and then met with the others in the group of journalists and bloggers on that trip, the feeling of ‘home away from home’ was immediately there.

Let us be a bit corny, as it is, after all, Valentine’s Day, and use the title of Kylie Minogue’s pop song here. I wanted to continue with my line of thought where I was talking about special connections with a region and an area that never stops to amaze you.

I have been to Puglia before and I liked it already from the first moment. It was only the last two times though during my wine travels that I really experienced Puglia more in-depth. I still need to discover the more southern parts of Puglia, but I must say that the experiences of the more central and northern parts have been wonderful. See more in my article Nero di Troia – A Wine Worthy of Greek Gods at #Radicidelsud in Puglia. 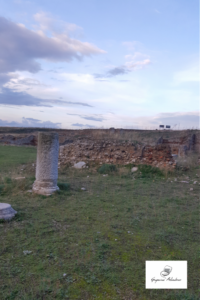 In January, I went to visit Ascoli Satriano and the areas around Lucera and I ended up discovering so much more.

Ascoli Satriano is a small town in the Tavoliere delle Puglie area in northern Puglia that has a history that dates back to ancient times. The wings of history have touched upon Ascoli Satriano making it the home of the Griffins, the place of the Battle of Asculum where Pyrrhus of Epirus had his victory over the Romans, and much more. Ascoli Satriano is also a place mentioned by James Joyce in his world-known novel Ulysses.

We also got to visit lovely historical sites and places such as the archeological site of Herdonia, Torre Alemanna, Troia, Lucera, the amphitheater in Lucera, the oil producer Roccia, a craft brewery, and much more. In this article, I will now focus on La Marchesa winery.

The estate has been in Sergio’s family since generations back but the dedication to viticulture and wine production is more recent. Before they cultivated other types of crops, as they are indeed in the area of the Tavoliere delle Puglie, also called the granary of Italy. 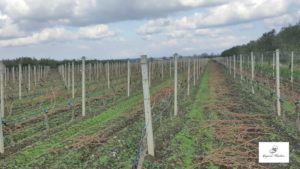 Today Sergio and Marika are running La Marchesa together since about 10 years and they are very much focused on valorizing the local territory and its traditions when it comes to vine growing and wine productions. The estate comprises 15 ha of vineyard where they cultivate the native grape varieties Nero di Troia, Montepulciano, Bombino bianco, and Fiano.

The focus on native grape varieties and the production of monovarietal wines have been a choice of theirs already from the beginning. They want to concentrate on making wines with those local grapes that give an expression of the pugliese terroir and tradition.

Sergio, who is a farmer at heart, explained to me that they are not certified organic, they are a conventional winery, but that he does not put much importance on these definitions. He believes in looking upon their vineyards as a part of their heritage when it comes to local territory and traditions. Therefore, he treats his vines with ‘kid gloves‘ and care, so to say, and has a preemptive approach to the work in the vineyards.

Sergio and Marika say that it is important to have vines that are strong and resistant to diseases so that you do not end up in a situation of needing to treat them with products that are harmful both to the vine and to humans in the long run.

The soil in their vineyards is a mix of clay, sandy and calcareous soil. The winery is located in an area which is close to the Gargano and its climate influences the farming in their area. The closeness to the sea and the winds blowing in also benefits the viticulture as well as the temperature differences between night and day.

All work from the pruning to the harvest is done by hand by themselves and trusted workers that have been handpicked by Sergio. Everything is carried out in a way to make sure that Sergio and Marika know what is going on at all times with the vines and the grapes in their vineyard. They are convinced that this is what makes the difference in the long run. When you meet them you really do understand that it is all about family and teamwork at their winery.

Il Melograno – A Rosé Wine in a class of its own

Nero di Troia is the grape with a big G in this rosé wine. Marika and Sergio say that Nero di Troia is a grape that can be fairly complicated to cultivate because it needs a lot of care and attention. It is a very noble grape that gives elegant wines. However, it is also a challenge to produce a Nero di Troia with optimal results.

So what could be more challenging than deciding to produce a rosé wine with Nero di Troia grapes in a region that is very well-known for its more colorful Negroamaro rosé wines? Well, Marika and Sergio at Cantina La Marchesa decided to do so and thus came up with Il Melograno. It had a great success already from the beginning and has become a bit of their flagship wine.

There has always been a tradition of making rosé wines in the area around Lucera. This, because it was very difficult to drink red wine during the very warm summers. Now you might think that people would choose fresh white wines instead, right? However, for the men in the area, it was not considered very manly to drink white wine and therefore rosé wines were a good compromise during the summer time. The rosé wines work well with the local food as well. Today, of course, rosé wines are much more trendy and popular in general. 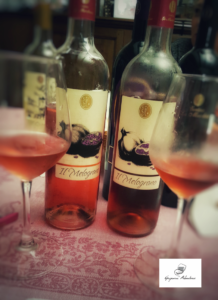 Il Melograno is a rosé wine that indeed is an expression of the terroir and the aromas that are typical for that area in Puglia. It is a wine with a light cherry red color or better almost the color of just pomegranate, and with a mix of fruity and floral notes. The fruity aromas are, for example, cherry and raspberry. It is a fresh, mineral and very enjoyable rosé wine.

I tasted both Il Melograno 2017 and 2016 when I visited them. The 2017 was indeed very fresh and fruity and perfect for an aperitivo on a hot summer day. The 2016 was a bit ‘fuller’ or ‘deeper’ in its character with notes of ripe fruit, more floral, and spicy.

They are so fascinated by the pomegranate fruit that they have also created a panettone (a typical Italian Christmas cake) and chocolate on the basis of pomegranate with the help of a local pastry chef. The chocolate is perfect as a gift on Valentine’s Day and to pair with Il Melograno wine. What could be better than this…?

A Taste of Puglia

This first article about La Marchesa Winery has been to give a small taste of the wines they are producing. Their rosé wine Il Melograno seemed like a perfect pairing on this Valentine’s Day. The chocolate they have created together with a local friend who is also a pastry maker, of course, pairs even better with Il Melograno today.

During the next week, I will tell you more about the other wines that La Marchesa winery is producing with native grape varieties. Stay tuned!

And if you are impatient to learn more about La Marchesa winery, feel free to check out the episode of WinesOfItaly LiveStream with Marika below!