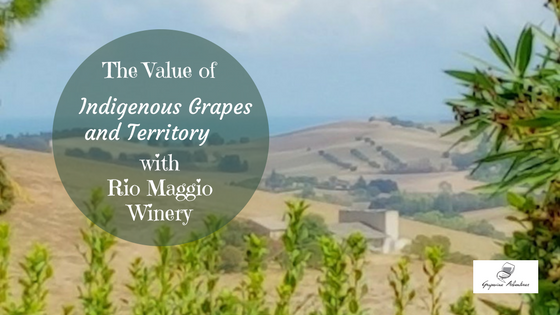 On October 17th, 2017, we were talking about wines in Le Marche at #WinesOfItaly #LiveStream with the guest Simone Santucci from Rio Maggio winery. This is a winery located in Montegranaro in the province of Fermo which is just north of Ascoli Piceno, close to Macerata, and just 10 km from the seaside in Le Marche.

My co-host for this episode was the sommelier and wine educator Tina Morey from the weekly Twitter chat #Winestudio. Some year ago, Rio Maggio and their wines took part in one of her #Winestudio chats so she already knew a lot about the winery.

Even though this live stream took place in October, it here becomes a nice reading, at least I hope you think so, for the Christmas holiday. Learn more below….and, Merry Christmas!

Rio Maggio winery was founded in 1976 by Graziano Santucci, the father of Simone. When Graziano Santucci decided to start a winery there was not much viticulture in that area but rather fields of mostly corn mixed with forests and fruit trees.

Simone told us that his father had a great love for his territory and the land there which lead him to also have a passion for wine and wine production. This convinced him to start from nothing to plant vineyards and making wine.

This, in a region such as Le Marche where the sea and the mountains are close and in between you have hills that are descending towards the sea. The sun and the heat give rise to high sugar levels and intense aromas and flavors. The soil is mainly calcareous and of clay and is very suitable for vine growing and winemaking.

Graziano was first and foremost an entrepreneur in the clothing industry and had the wine production as a sort of side business. However, Simone tells us that when he was not traveling the world you could find his father early in the morning helping his workers in the vineyards. He was indeed very much connected to his territory and his roots in Le Marche.

The idea of Graziano Santucci was to produce a bottled wine of high quality. Still today, the winery is focused on quality and to produce wines that are connected to the territory and using indigenous grapes to the region.

Simone and his wife Tiziana took over the management of the winery in 1996 and are since then focusing precisely on the growing of indigenous grapes and to produce wines within the local denominations Rosso Piceno DOC and Falerio dei Colli Ascolani DOC.

During the #WinesOfItaly #LiveStream, a fun anecdote was told by Simone when he talked about how Le Marche is a region with a very particular character and landscape that is very dear to him and his family.

On every hill, there is a small village or hamlet each with its own traditions and customs that they defend to the bitter end. The sometimes exaggerated defense of local traditions is often born out of a certain competition between the villages.

Historically, this was also political and had a sense as a way for city-states and different areas to defend their history and traditions. This is in Italy referred to as campanilismo. Today, the concept of campanilismo has a more banal and simple undertone.

Rio Maggio produces a wide range of wines. Here, I will mostly mention those wines that they sent to me before the #WinesOfItaly #LiveStream. They sent me six different wines:

Simone says that they 7 years ago started to focus on Telusiano Falerio dei Colli Ascolani DOC to extract even more of its local characteristics. They do a maceration on the skins, in the beginning for around 5 days, but now it lasts for 3 days. In his opinion, Telusiano is a wine that very well reflects the aromas and the colors of the local territory.

Telusiano is indeed a wine with a beautifully intense straw-yellow color. It is a mineral and sapid wine where you feel the influence of the sea and with notes of fruit, white flowers, and a bit herby undertone. It is a very nice and enjoyable wine.

Pecorino is an indigenous grape variety which was rediscovered and recuperated in the 1980s as it was about to disappear almost completely. It is a grape with a high alcohol level and high acidity which gives it a great aging potential. The grape gives rise to fresh, mineral, and floral wines.

The project of producing Colle Monteverde started around 10 years ago at Rio Maggio. I very much like this Pecorino wine for its minerality and intense aromas as well as for being able to really feel the essence of Le Marche in the wine. For some of you this might sound strange, but if you have been to Le Marche you indeed can feel the sea and the Marche territory in this wine.

It is a wine made with the last and most mature grapes harvested in the vineyard after the first and second round of harvest. Simone says that it is their cru wine. Due to the intensity, alcohol level,  and power, it has also been called the Amarone of Central Italy sometimes.

The power and structure of the Montepulciano combined with the elegance of the Sangiovese makes it into an amazing wine. According to Simone, it is at its height after 5-10 years of aging. I can attest to that as I tasted a 2012 which has a complex nose with fruity notes of cherry and black cherry, for example, as well as notes of spices, vanilla, cacao. This combined with the acidity makes it into an explosive combination.

The maturation in barrique makes it smooth without the oak becoming too intrusive on the taste. In fact, the taste is rich and full-bodied with elegant tannins. I liked this wine a lot.

This is also a blend of 70% Montepulciano and 30% Sangiovese and it is a non-filtered wine. I think this one is my favorite red Rio Maggio wine. It is a structured wine with lovely fruity notes of cherry, sour black cherry, and blackberry followed by more spicy hints of cinnamon.

It macerates on the skins for 15 days which, of course, gives it its distinct local aromas and flavors. Just as with the Granarijs, the maturation in barrique gives it a smooth character without the oak dominating the wine. I brought it to a dinner at a friend’s place where she had made game bird and polenta. It worked fairly well with this dish.

Further on, I will talk more about the Vallone Rosso Piceno and Passerina Monà.

To learn more about the Rio Maggio wines and the owner Simone Santucci, listen to the entire episode below of #WinesOfItaly #LiveStream.

Then, if you liked this type of wine content, don’t forget to sign up for my newsletter right here.