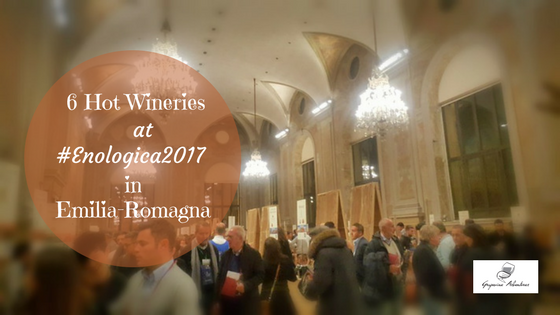 Taking a day trip to Bologna is always fun especially to be able to taste six hot wineries at a wine event such as #Enologica2017. Then, in this period when the holiday season is slowly getting closer the city is very much alive with happenings. I more or less lived in Bologna for three years some time ago, so last Sunday was also an occasion to meet up with my friend Heidi whom I had not seen for some time.

Last Sunday, I thus decided to go to #Enologica2017 together with Heidi which is a three-day long wine event organized by the Enoteca Regionale Emilia-Romagna (the regional enoteca in Emilia-Romagna).

Emilia-Romagna is hot for the moment, already this summer when I went to Enio Ottaviano winery for their summer party and then visited Cantina Braschi, you could feel the vibrancy. The many native grape varieties and the fact that Emilia-Romagna is so much more than Lambrusco and Sangiovese di Romagna is becoming more and more clear.

The venue for the fourth edition of this wine event was Palazzo Re Enzo right in the center of Bologna, next to Piazza Maggiore. Palazzo Re Enzo was built between 1244 and 1246 as a part of the extension of the municipal palaces, even though its history is more connected to King Enzo of Sardegna. Enzo was the illegitimate son of Frederick II, the Holy Roman Emperor, and a part of the Hohenstaufen dynasty.

In 1249, Enzo of Sardegna was taken prisoner close to Modena after a defeat of the Emperor’s troops against the Bolognesi. He was then transferred to Palazzo Re Enzo where he was kept a prisoner for more than twenty years. There seem to be a complete set of legends around his captivity, one being that he could receive female companionship on a regular basis.

Returning to talk about wine, Palazzo Re Enzo was the perfect location for a wine event. It was all very well organized, and the atmosphere felt almost a bit Christmassy already with the big tree creation in the middle. (Sorry, I apologize that I do not remember the exact name of the creation, we were focused on the wines 😉 )

The possibility to buy a piadina romagnola when you felt that you needed a break from the wine tastings felt just perfect. Together with Heidi, we were very happy to sit down for a while, eat something and catch up on some gossip.

We tasted many more wines from other wineries, however, I had to select only a few to not make the article too long. Furthermore, I have divided them into wineries I already knew and those whose wines I had not yet tasted.

Two stops we made were at the booths of Enio Ottaviani winery and Cantina Braschi. Basically, Heidi tasted most of their wines this time as I am already quite acquainted with them. 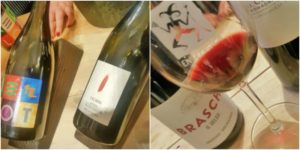 Even though Heidi likes very structured and full-bodied wines, she was very favorable to the Caciara Romagna DOP Sangiovese Superiore of Enio Ottaviani winery. Read more about their wines in my article Wine and Fun at Enio Ottaviani Winery’s #Caciara Party.

Cantina Braschi was a guest at my #WinesOfItaly #LiveStream in July and then I also visited their winery some weeks after.

At #Enologica2017, I only tasted their Il Gelso Romagna DOC Sangiovese Superiore 2015. This one has a new label which is very minimalistic and modern. Heidi tried some of their other Sangiovese wines too and very much enjoyed them. Learn more about this winery in the article Cantina Braschi – A Focus on Indigenous Grapes in Romagna.

One of the first wines I tried at #Enologica2017, and where I also found Heidi in the beginning, was at the booth of Tenuta La Viola. This is a winery located in Bertinoro, in the province Forlì-Cesena, which is one of the key areas in Romagna for the growing of Sangiovese di Romagna.

The landscape is made up of hills and the closeness to both the Adriatic sea and the Apennines makes the microclimate very suitable for viticulture. The soil mainly consists of clay, limestone, and fossil shells which in turn give its certain character to the wines.

I only tasted two wines at the booth of Tenuta La Viola, namely their In Terra Forlì Bianco IGT 2016 Albana in amphora and Sangiovese di Romagna Superiore DOC Oddone.

The Albana in amphora is a very interesting white wine, in my opinion, and the grape seems suitable for the long maceration on the skins that are carried out in amphora. The pronounced acidity and the explosion of fruity aromas combined with the typical hint of almond make it into a wine you need to try out. 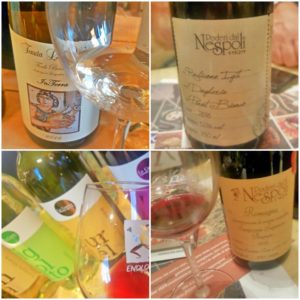 We had a nice chat with Davide Aruta from the Azienda Agricola La Casetta while we were tasting their wines. He told us about their reduced use of resources, for example by using a drone to monitor the vineyards and thus being able to intervene on the vines only when it is needed. In general, they work in favor of sustainability.

We tasted all of their wines but I will only mention two of them here. Davide Aruta will be a guest at #WinesOfItaly LiveStream on November 28th at 21.00 CEST / 3pmEST, where you can learn more about the winery and the wines. I hope you will join us next Tuesday on Facebook LIVE here.

In the still Pignoletto DOC from La Casetta, you feel the floral and fruity aromas more intensely and it is a fresh and very pleasant white wine. The Costanza Romagna Albana DOCG 2016 is another of their wines. It is a more structured and fresh white wine with both fruity notes and hints of white flowers.

Though I had met Fabio Ravaioli from Poderi dal Nespoli 1929 (located in Nespoli in the province of Forlì-Cesena) at some other wine events before, I had never really tasted their wines. So, at #Enologica2017 it seemed like time to do something about this. Together with Heidi, I stopped by their booth and we tasted all the wines they had brought to the event.

Poderi dal Nespoli 1929 dates back to, yes, exactly, 1929 when Attilio Ravaioli founded the winery and planted the first vines. Today the estate comprises 110 ha (270 acres) and is thus a slightly larger winery than the others in this article. Nonetheless, it is a winery that is deeply rooted in the Romagnolo tradition. If you read their vision statement on the homepage it says:

“Our wine is the spirit of Romagna. In it we concentrate the essence of a land that lives for conviviality.”

When you meet Fabio himself he also characterizes the essence of Romagna, being very witty and a fun loving person. Below you can get a glimpse of Fabio pouring the wine for us.

If we now move on over to the wines, I really liked their Dogheria Rubicone IGT Pinot Bianco 2016. It is a fresh and mineral wine with floral notes. Of course, I liked all their wines but there is not enough space here to talk about all of them.

Their Sangiovese di Romagna wines have a prominent position in their production and we tasted a couple of them. The Prugneto Romagna DOC Sangiovese di Romagna 2015 is a 100% Sangiovese wine with notes of red fruit, such as cherries, and the typical note of violet. The tannins are non-intrusive and overall it is a structured and very enjoyable wine.

One of the last booths we passed by was the one of Tenuta Pertinello which is a winery situated in Galeata in the province of Forlì-Cesena. The present owners took over the winery in 2006 and during the first years, they only produced one Sangiovese wine, namely Pertinello. 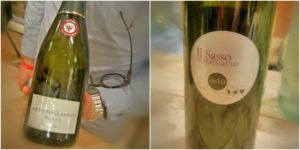 They now produce three different Sangiovese wines: Il Bosco, Pertinello, and Il Sasso. We tasted Il Sasso 2010 Riserva which is made with grapes from the 60-year-old vineyard of the estate. The fermentation is made in open oak barrels while the wine matures 16 months in barrique. Thereafter, it lays in the bottle for about 10 months. It is a very structured, smooth and elegant Sangiovese wine where you feel the presence of the barrique but it is not too predominant.

The very interesting wine was their Sangiovese Metodo Classico sparkling wine vinified as a white wine and made with the Champenoise method. It has been sitting on the lees for 20 months. It is a full-bodied sparkling wine with notes of red fruit and a persistent perlage.

One region, but so much to learn

#Enologica2017 is an event that showcases the wines of Emilia-Romagna. There were more than 100 wineries present and even though they were only from one region, there is so much to learn. All from Albana, Famoso, and Pignoletto to Lambrusco, Sangiovese, and so much more.

Together with Heidi, we walked around and tried to cover as many booths with wine producers as possible. We were having fun catching up on things and talking to the producers, and that is probably the essence of a good event. So, I hope you enjoyed the six ‘hot’ wineries I chose to write more about. #Enologica2017 was definitely a cool event.

2 thoughts on “6 Hot Wineries at #Enologica2017 in Emilia-Romagna”