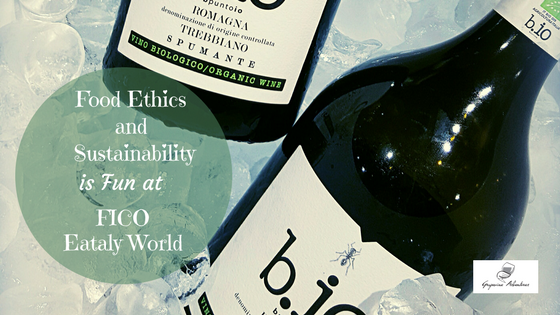 Learning more about agriculture, food ethics, and sustainability can be fun and is fun and cool at FICO Eataly World in Bologna.

On November 9th, in the morning, I and Nadia took the train towards Bologna, not without the usual crazy mishaps that are typical when traveling with me. LOL Anyway, we arrived in time to take one of the free shuttles from the Central Station in the direction towards FICO Eataly World in the periphery of Bologna.

We were invited for a ‘pre-tour’ of the FICO Eataly World organized for the press. We were a couple of hundred national and international journalists, bloggers, influencers, etc. who had been invited for this very nice tour. So, we felt very cool and part of a VIP peek into this new spot in Bologna.

The real opening of FICO Eataly World will be on November 15th.

At the following press conference, we could listen to Vincenzo De Luca (Executive Director for the Promotion of the State System at the Ministry of Foreign Affairs), Gianni Bastianelli (Director of ENIT, National Tourism Board), Virginio Merola (Mayor of Bologna, Oscar Farinetti (Founder of Eataly), Tiziana Primori (CEO at FICO Eataly World), Andrea Segrè (President of the FICO Foundation), Alessandro Bonfiglioli (Director of CAAB, Agricultural & Food Center in Bologna), and Andrea Cornetti (Director of Prelios Sgr) talking about how the idea behind and creation of FICO Eataly World was realized.

Phew, that was a long list of names… Let’s get down to talk more about Eataly World itself and our experiences. In this article, I will tell you my and Nadia’s story about FICO Eataly World mostly with images and videos.

What is FICO Eataly World…?

FICO is an acronym for Fabbrica Italiana Contadina (The Italian Farmers’ Factory). FICO is a foundation that promotes the dietary education as well as the knowledge about food in general. They aim at educating the consumer to be conscious of his/her choices and to reach a sustainable production of food.

However, there is indeed a broad local and national network of organizations, foundations, state organs, universities in the agricultural and food sectors standing behind it all.

Of course, also Oscar Farinetti, the founder of Eataly, has had a crucial role in the projecting and construction of Eataly World in Bologna.

The Eataly World area comprises 100,000 square meters where space is dedicated to different realities in biodiversity, agriculture, food science, etc. The project has been realized by the architect Thomas Bartoli.

For example, the area includes 2 ha of fields and stables with animals, such as cows and pigs, more than 2000 different types of plants, 40 different food production laboratories and shops, restaurants, kiosks, and cafés.

When we arrived, we were divided into smaller groups and each group was then assigned a tour guide that showed us around and told us about all the particularities of FICO Eataly World.

Already from the beginning, I started doing some videos and getting lost not remembering where my group was. 😉 Nadia was taking photos, keeping to the group, and recuperating me every now and then.

We started out with a tour of the part where they have the stables and enclosures for the animals. Then we continued inside to learn more about the different indoor areas.

A fun thing is that you outside can rent bicycles with a shopping basket so you can bike around Eataly World doing your shopping. There are even bicycle parking racks at different places around the area. However, I and Nadia discussed this not being sure how this will actually work when there will be a lot of people around. To us, it seems like an accident will happen sooner or later.

Doing a Live Video While Sipping on Wine and Tasting Food

The next video is a bit silly, as we were sipping on Trento Doc sparkling wine and tasting the yummy seafood dishes at Il Mare di Guido. This is a branch of the Michelin star level Ristorante Guido in Rimini. (Sorry that the videos are mostly in Italian and not in English.)

As the FICO Eataly World will also be a center for education about food, sustainability, and sports there are different areas where you can learn and explore different thematics. A lot of focus will be on inviting school classes for educational visits.

For example, there are six different areas, so-called Giostre multimediali (Multimedia Carousels), with a focus on man and the elements.

While in the area Man and fire, I snapped a short video.

The thoughts behind and the aim of the project are very current and important. Let us hope that it can indeed become a place for learning about agriculture, food, sustainability and much more. This while having fun and exploring regional food and beverages.