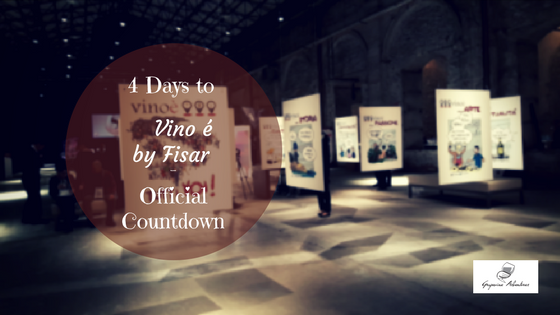 The so-called ‘final countdown‘ to the second edition of Vino è has begun. On Sunday, November 5th, it opens its doors at Stazione Leopolda in Florence and lasts until Monday, November 6.

Fisar is one of the main Italian Sommelier Associations and they implemented their idea last year to organize a large wine event in connection with their annual national congress. The vision was to focus on smaller wine producers and, if possible, lesser-known viticultural areas.

Vino è is open to the general public. So go online on and by a ticket or directly at the entrance at Stazione Leopolda.

Last year, the first edition, turned into a huge success for Fisar. More than 6,000 entry tickets were sold, there were more than 100 wineries present with around 600 wine labels to taste. Apart from strolling around and taste wines at the different booths, you could also sign up for vertical wine tastings and follow educational and fun cooking shows.

4 Days to Vino è designed by FisarClick To Tweet

This year will be even better! Well, you might think…can it get any better than having access to taste 600 wine labels? Well, yes, it can. This year there will be around 120 wineries participating and thus, even more, wines to taste. The focus is still on smaller wine producers, even though there are larger and more well-known wineries too present.

When you tire of walking around and tasting wines in Area 1, you can sign up for a masterclass or follow any of the roundtable discussions or cooking shows.

The masterclasses are held in Area 4 and for example, you can learn more about the Chardonnay grape in Le Chardonnay en Champagne! led by Christina Willemsen from Fier Ce Fit. This masterclass takes place on November 5, at 11.30. See the website for other masterclasses and prices.

If you would prefer a vertical wine tasting, you can choose from several different options. Why not vintages of the wine Sterpi from Walter Massa in Piemonte or four vintages of the Furore Bianco Fiorduva from Marisa Cuomo? The latter one will be guided by the former Fisar Best Sommelier 2014, Livio Del Chiaro.

On Monday, November 6, you can listen to some interesting roundtable discussions. A group of academics and researchers will discuss the impacts of the climate change in the viticultural world. The discussion is moderated by Tessa Gelisio, a local TV host and President of For Planet Onlus.

Another roundtable will discuss a very current topic, i.e. the role the wine shops/bars in the age of the Internet and wine sold via e-commerce. The title is: ‘The secret to happiness? Choose a good enoteca‘. There will be seven wine shops/bars from Florence, Prato, and Perugia participating, namely  and the discussion will be moderated by Andrea Gori, a local sommelier, wine writer, and wine event organizer.

For the other roundtables, see the Vino è website.

During both days, there will be a lot of fun and inspiring cooking shows. The aim this year is to look upon wine as a ‘means of integration in its widest sense’. An integration between different cultures, populations, old and new, past and present as well as between man and territory.

To learn more about pastries, you can follow Luca Calamita from Enoteca Pinchiorri who will whip something up with olive oil and chocolate paired with a surprise wine. Another theme will be Asian food, where you, for example, can see the chefs from the luxury Chinese restaurant Fulin in Florence work with local raw materials.

Then, of course, you can also enjoy a cooking show on true Italian pizza with the Association Pizza&Peace. This association was founded earlier this year by four local well-known pizzaioli who will make different types of pizza.

To learn more about the different cooking shows, see the Vino è website.

Being a sommelier and a member of Fisar, I just wanted to say something about the importance of community and collaboration. Of course, you need professional assistance for the organization of an event at this level. However, the spirit of community, collaboration, and voluntary work is still the essence in order to pull through an event such Vino è.

There are many people who will be doing investing a lot of effort during this week as well as many have done so for the last year. My part this year, was in the group dealing with researching wineries. Together with Nadia Padrin, Bianca Ciatti, Marco Romanelli, and Livio Del Chiaro, we have been at it for many months to select the wineries you will be able to taste wines from at Vino è this weekend.

Fisar Nazionale and Fisar Firenze have worked tirelessly and on November 5-6, you can experience all this at Vino è at Stazione Leopolda.

The hashtags to use during the event are: #vinoe2017 and #vinoefirenze

The official Twitter accounts to tag are: @vinoefisar and @FisarNazionale

Tweet me at @ricasoli99 directly if you have any questions and if you are coming and want to meet up. 🙂

Hope to see you there if you are around!