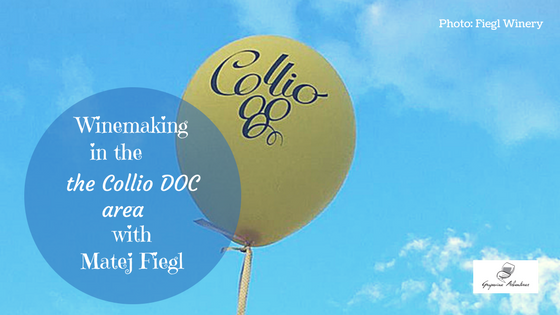 Some time ago, we went to Friuli Venezia Giulia to talk about not only grape varieties and winemaking in the Collio DOC area but also World War I history at #WinesOfItaly #LiveStream. My guest in this episode was Matej Fiegl from Fiegl Vini in Friuli.

This was not my first wine producer guest from Friuli, see also Discovering Italian Wines from Friuli with Moreno Jep Ferlat.

My first encounter with both Matej and his wines was at the wine event Vino é by Fisar last year at Stazione Leopolda in Florence. I was managing the Twitter activity for the event and Matej was very actively tweeting about the Fiegl winery’s presence at Vinoé. So, I just had to pass by and taste their wines, chat a bit, and snap a photo to tweet out.

You should definitely head on over and follow Fiegl on their Facebook, Instagram, and Twitter accounts. Matej is very social media savvy and as he said, “I love wine and I love Internet technology”. He takes his iPhone with him in the vineyard and posts directly from there.

He is also a live streamer. On their Facebook page, you can see him doing live streams where he presents their wines (in Italian though).

Fiegl – A Winery in the Collio DOC area

Fiegl winery is located in the village Oslavia in Gorizia in the northeastern part of Italy. Collio is the name of the viticultural and wine production area.

The Fiegl family dates to 1782 as vine growers and winemakers and in that period this geographical area was under Austrian rule. Matej told us that their family and surname indeed have Austrian origin and that they come from a village close to Vienna.

This area in the northeastern part of Italy has been and is a melting pot of cultures, nationalities, and religions. German, Italian, and Slavic domination has laid the ground for this mix of cultures.

It has also been touched by the horrors of war. In 1915, the Third Battle of the Isonzo lead by the Italian General Luigi Cadorna stormed right through the small village of Oslavia. In fact, the front line of the battle went along the hills of Oslavia. This war episode changed the village forever.

If we return to talk about winemaking, this battle also had a significant effect on the viticulture in the area. The harvest in 1914 before the battle, turned out to be the last harvest for several years to come. A large part of the indigenous grape varieties was lost due to the war. They only managed to save Malvasia Istriana, Ribolla Gialla, and Tocai Friulano.

It would take until around 1920 before they started to slowly be thinking about replanting grape varieties. This also opened up for the use of French grapes in this area such as Chardonnay, Sauvignon, Cabernet Franc, and Cabernet Sauvignon.

The climate in the Collio DOC region is favorable for the production of white wines. The area is close to the Adriatic sea at the same time as the winters are cold and the summers fresh.

If we continue to talk about the soil, it is a very poor soil that consists of clay and ponca, i.e. the “arenaceous and marly stratifications from the Eocene era”. This means that the vines need to go searching for the water deep down in the soil. It is a soil rich in minerals which is good for the complexity of the wines.

Here I will not go into detail about all their wines as you can learn more about this by listening to the #WinesOfItaly #LiveStream. However, I will briefly talk about the characteristics of three of the indigenous and one of the international grape varieties that they cultivate. Let’s dive in to understand more about these grapes.

This is a grape that produces complete and accomplished wines that need to lay in the bottle to reach perfection for quite some time. Matej says that it is a wine that pairs perfectly with San Daniele ham.

This grape produces a fresh and easy going wine that fits perfectly as an aperitif wine. It gives an elegant, mineral wine with a good acidity and aromas of white flowers typically.

This is a typical grape cultivated at the Collio, Friuli Isonzo, Carso as well as in Slovenia and Croatia. It produces a dry white wine in contrast to the sweet Malvasia produced in the rest of Italy.

Matej says that it is a very difficult grape to grow in the vineyard but that it gives great satisfaction when done well.  It is important to work the grapes well in the vineyard as the aromas are very delicate. Its aromas are also very particular ranging from more herby and green notes of basil, mint, laurel, and Mediterranean flowers to end with notes of tropical fruit.

Sauvignon is a grape with longevity and thus suitable for aging. When the wine is young the bouquet is quite green with the aromas mentioned above while it as the years pass become sweeter with notes of honey and pastry cream, a bit caramelized almost.

To learn more about the wines from Fiegl Vini, listen to the entire episode below of #WinesOfItaly #LiveStream.