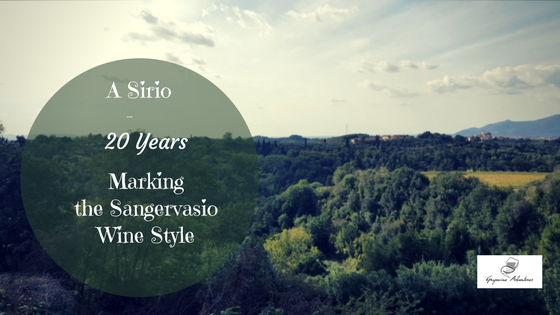 A Sirio can be considered to have helped to mark the general wine style of the Sangervasio winery.

On September 25th, I headed by train towards Pontedera where Lisa Tommasini waited to pick us up and continue towards their winery, Sangervasio. The occasion was to celebrate the 20th anniversary of their A Sirio wine.

A Sirio is one of the ‘cru’ wines of the winery. It was named as such, in honor of Luca’s grandfather Sirio Tomassini. This wine is made with 95% Sangiovese and 5% Cabernet Sauvignon. Since a couple of years, it is produced as a 100% Sangiovese wine.

It was a beautiful, sunny day and when we arrived we got a stunning view of the surrounding landscape. While Luca and his daughters were preparing for the vertical wine tasting, I took the opportunity to do a pre-tasting live video.

Below, you can see the amazing view and the people slowly dropping in for the wine tasting.

Sangervasio – An Organic Winery & A Beautiful Hamlet close to Pisa

The winery is situated in the San Gervasio hamlet in the Palaia district close to Pontedera. This is very close to the seaside and, in fact, this part of Tuscany was the bottom of the sea around a couple of million years ago. Therefore, the soil is rich on sea and fossil shells.

When it comes to wine denominations, they produce Chianti DOCG wines within the Chianti Colline Pisane sub-zone. Apart from the A Sirio IGT Toscana wine, they also produce an array of other red IGT wines as well as white wines, a sparkling wine, and Vin Santo.

The Sangervasio winery belongs to the Tommasini family since 1960 and Luca Tommasini took over the reins from his father, Furio, in the mid-1990s.

Before Luca took over they were focused on producing bulk wine. However, Luca convinced his father to change the direction towards a production of high quality and bottled wine. Last Monday, at the vertical wine tasting, Luca told us how they were entirely experimenting during the first years to find their own path.

In 1996, the winery became organically certified and further on they also started following the concept of biodynamic agriculture. They decided to start applying natural fermentations on their wines in 2003.

To read more about Sangervasio winery, see my previous article Wine and Olive Oil Tasting by the Pool.

Celebrating the 20th Anniversary of the A Sirio Wine

Rather than turning this too much into a description of tasting notes wine by wine, I was thinking of structuring up the vertical wine tasting according to different time phases. While listening to Luca Tommasini, it became clear that each time slot has its own story since he took over the running of the winery. Or perhaps rather its own theme.

The story of Luca’s time at the reins of the winery in some sense coincides with the story of the A Sirio wine. There is, so to say, a connecting thread running through the last 20 years.

An important thing to mention here before we start is that the malolactic fermentation of A Sirio is done directly in barriques where it continues then to mature for another 14 months. The barriques are to 50% new and for the rest of second or third passage. After that, the wine is laid down for 24 months in the bottle. 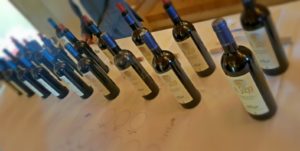 As mentioned above, 1994 constituted a year when the winery had a change of direction. Luca and his father Furio had different ideas and were probably butting heads a lot. In the end, Luca got the green light to walk his own way with a new winemaking vision.

The first vintage we tasted was 1995 which was a year when the experimentation was at its height at Sangervasio winery. Luca told us that they still did not have any clear ideas but were rather testing different techniques and trying to reach the greatness they could with the grapes they had at hand.

1995 was a great vintage where the wine has a complex bouquet and elegant style. In the beginning, it gave a bit the impression of an old, closed up closet but soon it started to open up and let out notes of mature fruit, spices, and more balsamic undertones.

Then we tasted 1997 and 1998 which, according to Luca, were both lovely vintages. Still, they were experimenting a lot at Sangervasio but everything started to look brighter. They were planting new vines in these years, both Sangiovese and international grapes.

In the 1997 vintage, you feel the freshness and the presence of the Cabernet Sauvignon, even though it is a small percentage. 1998 has not such a distinct freshness and the notes continue to be a bit more closed up.

The trend during these years in the 1990s and into the early 2000, was to produce more full-bodied, heavy, and tannic wines with a lot of oak (barrique) in a true, so-called, Supertuscan style. The Cabernet Sauvignon, even though in a small percentage, had a distinct presence in the style of the wines.

A new millennium – Sangervasio at a watershed

From 2001 and especially from 2003, you feel the entering into a new phase even though the wines stylistically had an excess of body and extract. However, you feel less the vegetal side in the wine in favor of freshness as well as beautifully fruity and floral notes. 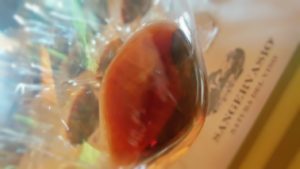 Luca continued to stress that they more and more started to catch up technically and to become more balanced in their winemaking knowledge in these years. From 2001, the new vineyards started to be used in the production too.

2003 was the true watershed in their production history, as they decided to not only be organic in the vineyard but also to have a natural approach in the wine cellar. The era of chemical substances came to an end at Sangervasio winery.

2003 was a very warm year, though still producing a very fresh wine with smooth notes of fruit, herbs, and present but non-intrusive tannins.

The vintages 2004, 2007, and 2011 can be said to have common traits of freshness, fruit, and balsamic undertones. For each year you can feel the trend moving away from the puffy and more robust wines towards something more modern and elegant.

A leap towards an elegant reinvention of Self

As we talked about above, the production of A Sirio started out in the mid-1990s when the trend was indeed very much dominated by puffy and a bit Gargantuan wines. The Sangervasio winemaking has evolved steadily during these 20 years though they still, of course, were influenced by the external wine environment. 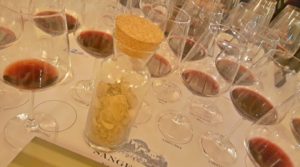 In the 2013 vintage, you feel something new really coming forth. The A Sirio wines cast aside the Cabernet Sauvignon in that year in favor of becoming pure and clean in its essence; a 100% Sangiovese.

The elegant and beautiful notes of the Sangiovese do come forth in this wine, the only thing here is that the taste is perhaps not as persistent as it could be.

We are thus at the 2015, which is just adorable in its smoothness and elegance both at the nose and the palate. It is still a young wine, however, the fruit and the floral touches are well balanced. In fact, I think that one of the other wine writers present at the vertical tasting claimed this vintage to be the first well-balanced one.

Now, I am not sure when the oenologist Emilio Falsini started collaborating with Sangervasio though I think he had a hand already in the 2015 vintage. Indeed, you feel his distinct style in this 2015 wine. And this was meant as a positive comment, in the sense, that the elegance and the true self of the grapes come forth in the wine.

After the wine tasting, the celebration continued with an aperitivo at the inner yard above the tasting room with an amazing view of the surrounding hills. We started with their sparkling wine made with a 100% Sangiovese according to the Charmat method.

Then it was time for dinner, more sipping on the Sangervasio wines and more chatting with the different guests. The Tommasini family had indeed organized a great vertical tasting and a fun evening for all of us.

So, not only did we attend a fun and cool event but we also learned a lot about winemaking on the Colline Pisane during the last 20 years. This, combined with the changes in wine styles and trends; from a more heavy and over-oaked style to more pure, elegant, and smooth wines.

What could be better than that…?

Check out Marina Betto’s article about this event here.