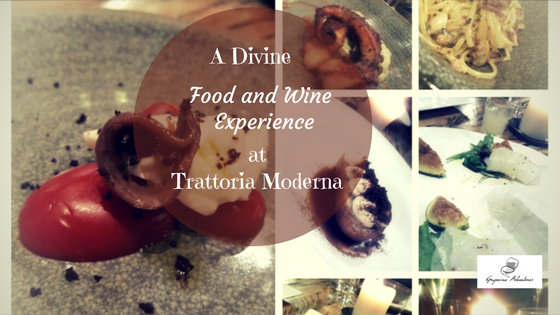 On a warm post-Ferragosto evening in mid-August, I went for dinner with a divine food and wine experience at Trattoria Moderna on Lugarno del Tempio 52 in Florence. I had asked my friend Nadia Padrin to join me. This turned into a fantastic evening where we got the whole VIP treatment and had a lot of fun.

We also had the pleasure to have a chat with the Chef Riccardo Serni himself. Furthermore, Alessandro and Gabriele, the sommeliers and waiters responsible for the beverage side made us feel cared for and with glasses topped all night long.

The interior is a trendy mix between a more minimal Nordic design and Tuscan traditional details in order to make it into a modern trattoria.

Read on to get a short background story about the restaurant and, of course, more details about the food and wine we enjoyed…

A new restaurant with an ethical concept

Trattoria Moderna opened its doors in May 2017, thus it is still fairly new on the restaurant scene in Florence. The men behind the idea to this restaurant are Luca Leonardi and Riccardo Serni.

Luca Leonardi, the general manager of this project, previously had a leading position within the FH Hotels Group. Riccardo Serni, the Chef, comes from previous high-level experiences at places such as La Pineta in Marina di Bibbona, Ristorante 1556 at Demidoff Country Resort in Florence, and the Michelin star restaurant ‘Lunasia’ at Plaza and De Russie in Viareggio.

The idea of this restaurant is to have an ethical approach to the cuisine, i.e. a cuisine of top quality to an affordable cost. Riccardo Serni told us that he often changes the dishes on the menu in order to follow what is available as raw materials.

For example, when it comes to meat, Riccardo Serni also told us that he only uses Chianina meat. He, himself, comes originally from the Maremma area and thus he believes strongly in using meat from the Chianina beef.

The raw materials are thus important in order to offer a menu with simple dishes yet with substance. Indeed, we were wowed by the tasting menu and every course had its own soul.

Our dinner at Trattoria Moderna

We were welcomed by the waiters and sommeliers Alessandro and Gabriele and offered a glass of Franciacorta with the first teaser, a revisited caprese. This was soon followed by a second teaser, namely a tartar di tonno con pane di nero di seppia. They were delicious starters each in its own way and perfect for a warm summer evening together with the Franciacorta. 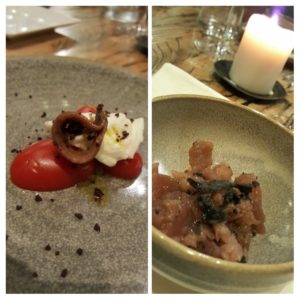 We then continued with the starter which was a carpaccio di baccalà with wasabi paired with a mini-cocktail made with vodka and lime.  See the photo in the lower right-hand corner below. 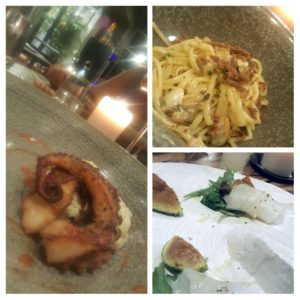 The first course was a linguine con bottarga di tonno e vongole which was just yummy. This pasta can seem like a typical seafood dish in the summer here but, as I mentioned above, at Trattoria Moderna they make local and genuine raw materials into something of true essence.

The linguine was paired with the white wine Annita from Azienda Agricola Il Rio situated in Vicchio del Mugello. This is a blend of Chardonnay and Pinot Noir vinified as a white wine.

This is a fresh, mineral, and aromatic wine with notes, for example, of citrus fruits, loquat, and herby undertones. It was a pairing made in heaven with the linguine.

The main course was a polpo leggermente scottato su crema di patate con capperi e polvere di origano (sauteed octopus on a potato puré with caper and dry oregano). This was just as delicious and well thought through as the other dishes and it was paired with the white wine Annita from before.

The pairing worked well here too even though the wine had a tendency with its structure and aromas to dominate the more delicate flavors of the octopus dish.

Watch the video below in Italian, sorry that it is not in English, about our live considerations upon the food and wine.

We are already at the desserts… 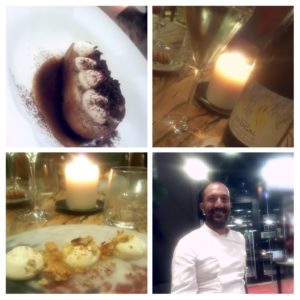 Time flies when you are in good company and have fun enjoying great food and wine. So, it was time for the dessert and we got to taste two different creations.

First out was a cheesecake revisited with a cream on pineapple, basil, and lime. The second one was a tiramisù with, I believe babà, a sort of syrup sponge, as a base.

The desserts were accompanied by a Moscato d’Asti Lumini 2016 from Ca’ D’ Gal. This Moscato with notes of acacia, sage, and musk as well as more fruity notes of peach, apricot, and green apple was perfect as a dessert wine.

While we were sipping on the Moscato wine and chatting with Gabriele, the sommelier, also Riccardo Serni joined us to chat a bit about his restaurant and his philosophy.

A Cocktail with Gin from the Casentino Area

While we were talking about local raw material and its importance, Riccardo mentioned a gin from a local producer in the Casentino valley in Tuscany that he uses. He then asked Gabriele to make us all gin & tonics with this particular gin.

Below, you can watch Gabriele in action preparing the gin and tonics for us.

An evening at Trattoria Moderna

The dinner at Trattoria Moderna was a lovely experience. The food and the wine were combined in an intelligent and thought through manner. Added to this, we had our almost personal sommeliers and waiters making us mini-drinks and cocktails and explaining the different pairings to us. What more could one ask for…!

So, I hope you enjoyed this article about the restaurant and you got to share a bit of the fun we had via the videos.

At Trattoria Moderna you can choose freely from the dishes on the menu or go with the tasting menu for 37 euro. The beverages are not included in that price. They are open both for lunch and dinner.

So, if you pass by Florence, you should definitely try it out.